House Speaker Nancy Pelosi tossed a wrench into Taiwan’s geopolitical tinderbox at the least opportune time, forcing the United States into a diplomatic quagmire with China that could precipitate a kinetic exchange or blockade of Taiwanese airspace and U.S. naval assets. This latest dispute stems from Pelosi’s planned tour of Asia that may include an excursion to Taiwan that’s as useless as President Zelensky’s “Vogue” photoshoot that romanticized a war-torn Ukraine. Here is an excerpt from “Preparing for War With China at All Costs” Part 1 in Oct. 2021 and Part 2 in Jun. 2022:

“Have you had enough of geopolitics with wars and rumors of war? I’m sorry to report that in addition to Russia’s ‘Surge of Little Green Men’ into Ukraine and Iran’s noted belligerence in the ‘Sinking Feeling About Nuclear Persia’ series, tension between China and the U.S. is accelerating over Taiwan. There’s also a renewed nuclear threat from North Korea, but that goat rodeo will have its own story to unwrap in the near future if the world doesn’t nuke itself first. Recent rhetoric out of China and its state-affiliated media sources let a cat out of the bag about its plans to rein in Taiwan that’s right out of the CCP’s Barbarian Handling playbook. Don’t dismiss that China is likely to take advantage of the U.S. preoccupation with Ukraine and views the Afghanistan debacle as a weak commitment by the Biden administration to its allies.”

While U.S. officials often make discreet visits to the island in a show of support for its democratic, self-ruling government, Pelosi is second in line to the U.S. presidency and one of the country’s most powerful politicians. We’ve all heard President Biden’s quirky gaffes and unintelligible wordsmithing, but don’t forget that Pelosi also has cognitive impediments and is a poor option for a diplomatic hurrah in Taiwan while NATO’s proxy war with Russia rages in Ukraine.

The U.S. has boxed itself in with Pelosi and Biden on one side of the ring, with the China-Russia tag-team in opposing corners and Iran or North Korea looking for a nuclear fight outside the ring. If Pelosi attempts to set foot in Taiwan, it risks the start of a military confrontation with China. If she backs down, that would tell the world and China that it called a bluff and won, which reinforces the view that the U.S. presidency and its current power exudes weakness.

A showdown with China is the last thing the U.S. and its allies need as the West suffers economic and diplomatic blowback from sanctions implemented against Russia that have been ineffective thus far. The geniuses in Europe, Brussels, the U.S. National Security camp, and Biden’s administrative cohorts have helped put the U.S. in an unwinnable quagmire with China and Russia both diplomatically and militarily.

President Orban of Hungary urges new EU strategy on Ukraine, says sanctions have failed… “Orban said this strategy has failed as governments in Europe are collapsing “like dominoes”, energy prices have surged and a new strategy was needed now. “We are sitting in a car that has a puncture in all four tires: it is absolutely clear that the war cannot be won in this way,” Orban told his supporters. He said Ukraine will never win the war this way “quite simply because the Russian army has asymmetrical dominance”. – Reuters, Jul. 23

Lavrov is on Blinken’s list of people to call… “The spectra of the collapse of EU economies is rattling the Biden Administration. A CNN report yesterday was titled US officials say ‘biggest fear’ has come true as Russia cuts gas supplies to Europe. It said the Biden administration ‘is working furiously behind the scenes to keep European allies united’ as the blowback from the sanctions against Russia hits them  and the ‘impact on Europe could boomerang back onto the US, spiking natural gas and electricity prices.’ The report quoted an unnamed US official saying Russia’s retaliation for western sanctions has put the West in “unchartered territory.” Suffice to say, Blinken’s call underscores the desperate urgency in Washington to open a line of communication to Moscow at the political level.” – Indian Punch Line, Jul. 28

President Biden and Chinese President Xi held their fifth call yesterday since Biden’s inauguration. According to the White House readout of the conversation, Biden reiterated that the “one China” policy has not changed for the U.S. and will not change, and the U.S. does not support “Taiwan independence.” In contrast, Xi was direct and blunt by saying that “those who play with fire will perish by it. It is hoped that the U.S. will be clear-eyed about this.” Beijing’s readout added that China should be “prepared for the worst scenario, especially military preparation” as the best way to deter the U.S.

Since the rhetoric out of Beijing has been so firm and public, Pelosi is unable to easily cancel a layover in Taiwan. She’s had strong support from prominent Republicans, such as Former Secretary of State Mike Pompeo and Senator Tom Cotton that publicly advised her to make the trip. If Pelosi decides to cancel, she will be viewed as “backing down” to Chinese bullying, and if she proceeds with her plan the U.S. and Taiwan face the real risk that China will make good on its threats.

What China will actually do remains unclear, but a spokesman for the Chinese foreign ministry said “a visit to Taiwan by Speaker Pelosi would challenge China’s red line, and any challenge to our red line will no doubt be met with resolute countermeasures.” The Global Times is considered an official mouthpiece for the Chinese Communist Party (CCP), and one of its journo’s stated that the People’s Liberation Army (PLA) has the right to forcibly dispel Pelosi’s plane, fire warning shots, or shoot her aircraft out of the sky. 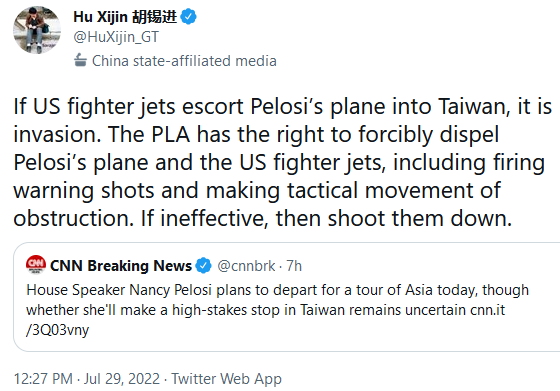 PLA’s post ‘Preparing for war’ draws wide support from netizens… “A short social media post by the Chinese People’s Liberation Army (PLA) 80th Group Army generated over 300,000 thumbs-up in 12 hours on Friday, amid high morale among Chinese soldiers ahead of the 95th anniversary of the founding of the PLA and escalating tensions across the Taiwan Straits.” – The Global Times, Jul. 29

What eventually happens in August will definitely have the world’s attention, with China and the U.S. careening towards a potential faceoff. The Pentagon chimed in saying it’s “not a good idea” for Pelosi to visit Taiwan at this time. Satellite images show an increase in Chinese air force activity at the Longitian Airbase on China’s southern coast. Meanwhile, the U.S. dispatched the USS Ronald Reagan aircraft carrier and strike group to the South China Sea this week after leaving port in Singapore. According to press reports, if Pelosi makes the trip to Taiwan, the Pentagon will send “fighter jets, ships, surveillance assets and other military systems to provide overlapping rings of protection for her flight.”

There are face-saving ways that Pelosi could nix the Taiwan leg of her journey. The visit can be postponed to a later date or something important demands her attention away from the Asian tour and travel is cut short. The most important reason for Pelosi to bow out gracefully, is that a boots on the ground visit in Taiwan does not provide any upside to U.S. national security or Taiwan at this time. Official and semi-official visits to Taiwan in the recent past are numerous. Adding one more serves no purpose when secure communication can be accomplished via an internet conference call. Here is the U.S. mainstream take on the situation this evening.

China issued an ‘unacceptable threat’ on Pelosi’s trip, Biden once again not being clear – Fox News