President Trump Has Dangerously Deceived Us All

Like millions of free-thinking patriots, I stood in shocked silence earlier this month when President Donald Trump visited Saudi Arabia — his first foreign trip as the Commander-in-Chief. Not only was the excursion outrageous given his powerful rhetoric during the campaign cycle, this marked the first time in history that a U.S. President has ever visited a Middle Eastern country as his first foreign trip.

This about-face by the Trump administration represents a dangerous, almost treasonous shift in his former hard-line stance against radical Islamic terrorism. Back in late 2010 — yes, 2010! — then U.S. Secretary of State Hillary Clinton’s private memorandums were released by rogue, “justice-seekers” Wikileaks. In one of the exposed documents, Mrs. Clinton had choice words for Saudi Arabia.

She wrote that the Islamic kingdom “constitute the most significant source of funding to Sunni terrorist groups worldwide,” according to The Independent. Former Secretary Clinton went on to state that “it has been an ongoing challenge to persuade Saudi officials to treat terrorist financing emanating from Saudi Arabia as a strategic priority.”

Yet the hypocrisy was that the Clinton Foundation, under the pay-for-play scandal, received millions of dollars from the Saudi kingdom, as well as individual Saudis. Furthermore, the governments of Kuwait and Qatar are also on the official list of donors. This fact was reported not by a conservative or far right news outlet, but by the very liberal CNN — and in the year 2008, no less! 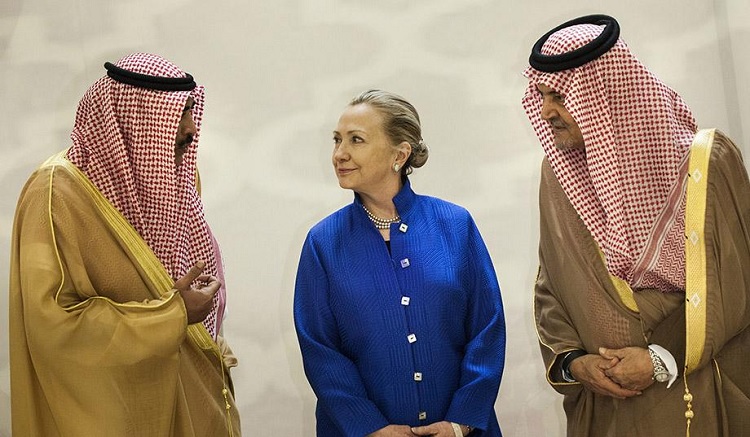 No wonder why then-candidate Donald Trump was outraged by Hillary Clinton and her ties to terrorism. During a presidential debate held in Las Vegas, Mr. Trump stated, “Saudi Arabia and many of the countries that gave vast amounts of money to the Clinton Foundation want women as slaves and to kill gays. Hillary must return all money from such countries!”

On top of that, the real-estate mogul added, “Saudi Arabia giving $25 million, Qatar, all of these countries. You talk about women and women’s rights? So these are people that push gays off business — off buildings. These are people that kill women and treat women horribly. And yet you take their money.”

A Return to Business as Usual

But now, as President of the United States, Mr. Trump has changed his tune dramatically. Rather than hold Saudi Arabia accountable for terrorism and its associations with terrorist organizations — which goes to the very top of the kingdom’s power structure — the Trump administration has now entered into an arms deal with them worth billions!

The President certainly cannot claim ignorance — he attacked Hillary Clinton for simply accepting money from the Saudis, which was (rightfully) bad enough in his mind. But what Trump has just committed is far, far worse. He has armed the very terrorists against whom he swore to the American public he would protect!

Make no mistake about it — Saudi Arabia is public enemy number one when it comes to radical Islamic terrorism. On February 6, 2002, “Saudi Arabia acknowledged for the first time that 15 of the Sept. 11 suicide hijackers were Saudi citizens, but said Wednesday that the oil-rich kingdom bears no responsibility for their actions.” How convenient — and yet, are we supposed to believe that nearly 80% of the 9/11 terrorists coming from the kingdom is a mere coincidence?

An Enemy Few Dare to Acknowledge

Indeed, at least one Republican member of the 9/11 commission, John F Lehman, had the guts to speak out. According to The Guardian, Mr. Lehman “believes there was clear evidence that Saudi government employees were part of a support network for the 9/11 hijackers and that the Obama administration should move quickly to declassify a long-secret congressional report on Saudi ties to the 2001 terrorist attack.”

Those that have researched the extensive ties to terrorism and Saudi government officials should not be surprised. According to the New York Post, “the kingdom’s involvement was deliberately covered up at the highest levels of our government.”

In Trump, the American people thought they had identified the culprits of this conspiracy to hide Saudi culpability, namely, Hillary Clinton and the liberal Washington establishment. Sadly, as it turns out, this swamp has infiltrated nearly every aspect of our government, including the Commander-in-Chief.