It’s one of the hallmark promises of the Trump administration — drive up GDP growth to at least four percent annually. Even more impressive — or outlandish, depending on your perspective — is the proposed time frame. A proper economic stimulus plan can get our country back on the right track. According to the President, a 4% GDP growth rate can be accomplished over the next few years.

As usual, the White House is light on details, but the economic stimulus goal is certainly within the realm of possibility. I’d argue that it’s more than probable that President Trump can make the American economy great again. The worst of the aftershocks stemming from the 2008 global financial crisis is behind us. Yes, that is the result of kicking the can down the road, but in the interim, the broader economy has stabilized.

To us, the question should not be whether President Trump can spark GDP growth; the real issue is whether or not his economic stimulus plan will impact the burgeoning national debt. To quote an old aphorism, there’s no such thing as a free lunch. As Isaac Newton might say, for every action, there is a reaction.

The main weapon for economic stimulus is Trump’s tax reform proposal. His idea is to reduce tax liabilities for all American entities, thereby stirring GDP growth through the free markets (ie. encouraging higher money velocity). The proposal itself is a bit shoddy, but it could still “work” by the country believing in its potential, not through its actual performance.

My research into historical GDP growth rate suggests that we are standing on an inflection point. While most mainstream analysts focus on annualized GDP growth, I decided to focus on quarterly trends. My idea is that if economic stimulus plans are effective, they would demonstrate generally even differentials. 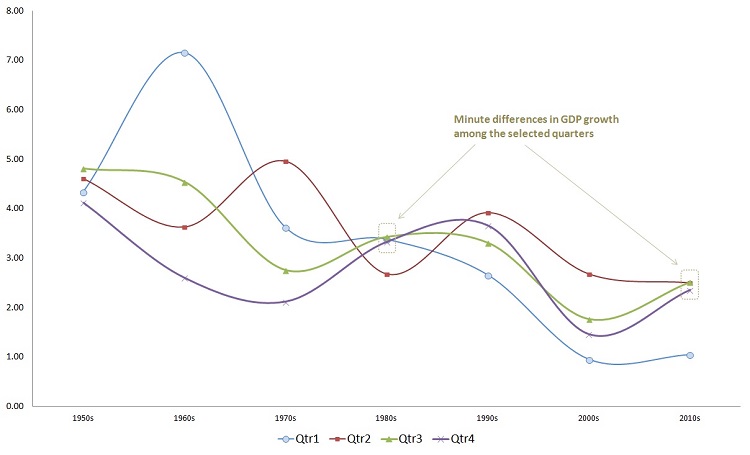 Based on my chart above, it’s obvious that this is not always the case. The seismic social shifts during the 1960s and 1970s produced wildly different GDP growth curves, depending upon the season. However, during the economic heyday of the 1980s and 1990s, the growth curve spreads were consistently tight. That indicated not only stability, but stability throughout each of the four quarters.

But an interesting pivot occurred during the 1980s. At that time, three of the four quarters (Q1,Q3, and Q4) had a high-low spread of only 3%. In modern U.S. history, that low of a differential has never occurred until this present decade. Currently, every quarter except the first has a spread of 6.7%.

What does this all mean? As stated earlier, I believe we’re on an inflection point — economic stimulus could send GDP growth up to the promised 4% annum, or we could go on a wild ride south. My gut tells me that President Trump will be successful in his plan for America. However, future generations may rue this day.

Consider that in the 1980s, a seismic backlash occurred. The 60s and 70s were a period of rampant liberalism, of “free love” and “flower power.” President Ronald Reagan came on board and induced a dramatic paradigm shift. No longer was America going to be subservient to foreign interests. Instead, we’re going to lead through strength. It’s absolutely no coincidence that in this era, Hollywood action heroes Arnold Schwarzenegger and Sylvester Stallone came of age.

You’d have to be living under a rock to not notice a similar dynamic with President Trump. In many ways, his administration is a reincarnation of Reagan. As such, it is also the resurgence of Reaganomics.

That will have diehard conservatives cheering. But remember, Reaganomics is not without its faults. His policies ballooned the national debt. Ironically, it fostered bipartisanship in fiscal recklessness. Of course, it’s true that President Obama nominally blew up the national debt the most; however, every administration has contributed to this problem. No one has clean hands here.

So yes, President Trump via his economic stimulus plan will get GDP growth to his 4% target — no problem. The question is, do we really want him to succeed?