I subscribe to The New York Times. For today’s briefing, I received an intriguing news item: the St. Clair Correctional Facility in Alabama has deteriorated into an unthinkable human tragedy and ongoing crisis. Immediately, I thought that falling prison expenditures contributed to this disaster.

Perhaps an element of financial scarcity applies here. However, federal statistics indicate that prison expenditures have skyrocketed since the late 1970s to early 1980s. In 2017, government costs for incarceration of prisoners totaled $92.7 billion. Although the U.S. Bureau of Economic Analysis apparently stopped recording expenditures since then, we can reasonably assume that costs are on the rise.

Everywhere we look, violent crimes dominate headlines. In recent days, I keep coming across painful stories about a college student who mistook someone for her Uber driver. That misidentified person later murdered the student, causing a ripple effect throughout the nation.

We can go into the granularity about why our society is devolving so badly. Suffice to say, one of the strongest contributors is the breakdown of the family unit. Incarceration costs provide an insightful, albeit alarming confirmation.

A relatively easy way to resolve our country’s increasingly coarse culture is through education initiatives. We already waste far too much of our wealth on military expenditures. How many nuclear warheads do we need to ensure our security?

Fortunately, that’s exactly what’s happening. In 2017, expenditures for education totaled more than $952 billion. That’s an extremely sizable amount, rivaled only by few federal programs like the military and social security. 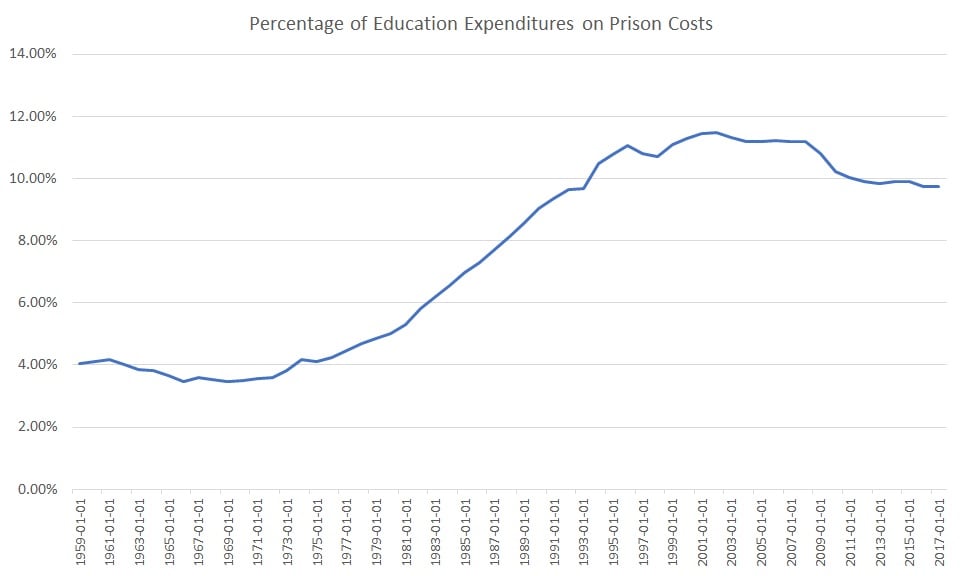 However, prison expenditures represent a worrying percentage of educational costs. The lowest ratio between these two metrics occurred from 1963 through 1973, averaging 3.62%. On the flipside, the highest ratio occurred between 1999 through 2008, averaging 11.25%.

I would argue no. While the magnitude has certainly declined, I’m worried that the government is spending excessive dollars on consumptive endeavors like incarceration. Furthermore, generational trends indicate that this trend will worsen.

During the 1980s and especially the 1990s, the American education system experimented with alternative methodologies. Gone were traditional, conservative, family-oriented values. In its place was an almost-theology of individualism.

Such enforced mechanisms have disrupted the family unit, resulting in children with no direction and guidance. Invariably, many of these lost kids grow up as dysfunctional adults, eventually entering and weighing down the penal system.

Although I’d like to believe that society is changing for the better, all the evidence suggests otherwise.