Pronouncements of the Bitcoin Crash are Premature!

We can get the low-hanging fruit out of the way first — bitcoin and most of the cryptocurrency markets have suffered a tremendous backlash in the past 48 hours. After a massive surge that saw bitcoin challenge the $2,700 level and ethereum jump past $200, early investors saw an opportunity and exited the markets. That caused the weak-hands to be flushed out, crippling near-term momentum.

Predictably, the mainstream media chimed in with their typical negativity towards any asset class not directly related to the paper equity markets. Bitcoin, they denounced, was a speculative vehicle — and they reinforced that spurious point with a reminder of the crash that occurred in 2013 and 2014. With such dire implications, it’s a wonder why anybody would reinvest in the cryptocurrency markets.

Except that they are. Irrespective of the recent bitcoin crash, what cannot be denied is that cryptos are gaining wide acceptance. A few weeks ago, Japan made huge waves, essentially declaring that bitcoin is a legitimate currency on par with the fiat of any developed nation. Any accusation of an unsustainable rally must first bring this integration into context.

The other point about the bitcoin crash is that it is much more accurate to define it as a correction. A crash is a descriptor of what happened to the Dow Jones Industrial Average in 1929 and the immediate years following that dark period in American history. The Great Depression was named as such in part because the Dow fell below the average levels seen during the mid-1910s and throughout most of the 1920s.

The present “bitcoin crash” would only be an appropriate term if the price fell well below the $1,000 mark. At time of writing, bitcoin is trading above $2,200. Furthermore, the rest of the cryptocurrency markets show signs of stability. Ethereum is trading above $170, while the burgeoning STEEM currency is just under the $1 mark. 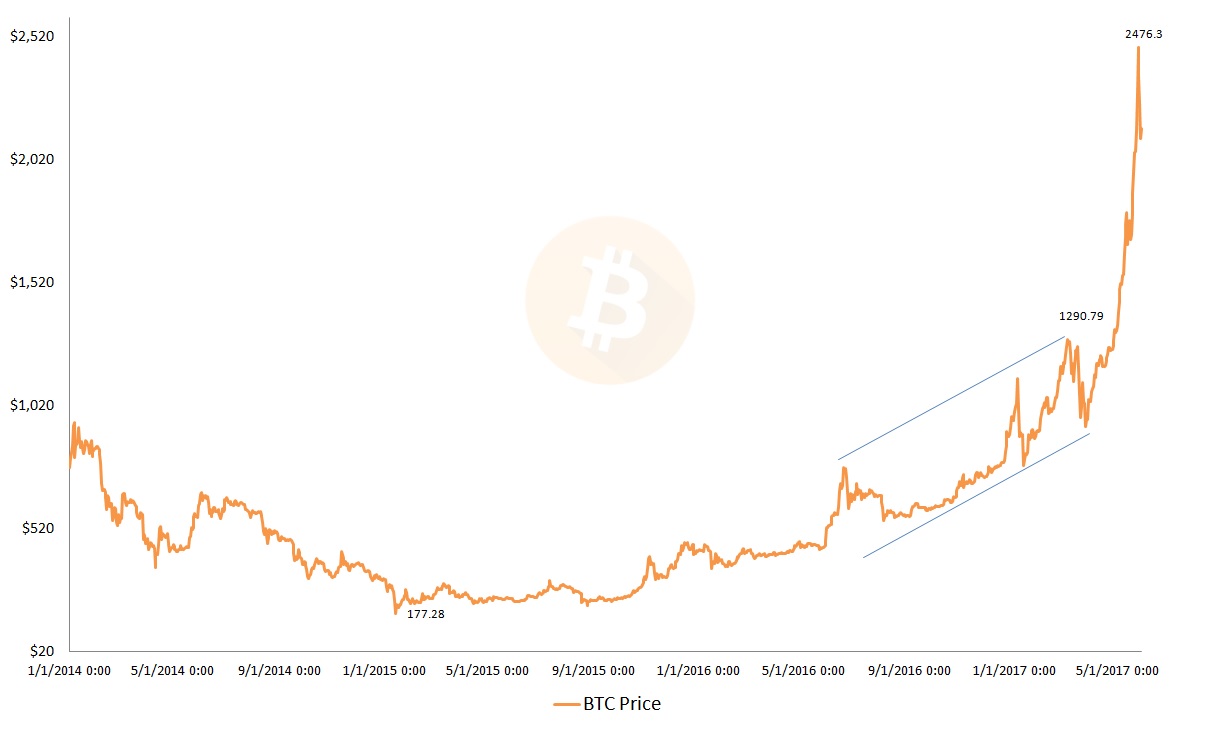 Rather than a crash, I view the cryptos as a buying opportunity. When bitcoin was first introduced, nobody had any clue what it was, nor how impactful it would later be. Today, we have a basic understanding of cryptos, but have yet to truly tap into its potential on a broader scale.

Imagine the possibilities if even 10% of every developed nation were to adopt and integrate bitcoin and other cryptocurrency assets into their daily lives — how much would that go towards further scalability? Even better, imagine what the cryptos could do for developing nations and frontier markets.

As Westerners, we take for granted the inherent stability of our fiat currencies. We are reasonably assured that tomorrow will come, and that one day from the next will not appear that different. That, however, is not the reality for billions of people across the globe.

What cryptos can do is to provide a basis for financial stability that is simply impossible with soft currencies. Filtering through the trials and tribulations of government corruption, cryptocurrency assets provide a benchmark for value independent of fiat.

Of course, we have a long way to go before integrating frontier markets. Still, the volume surge that we have experienced is nothing compared to what we will see in the future.

So no — don’t take the mainstream media’s assessment of bitcoin with any degree of seriousness. This ride is just beginning!