The Punishers – U.S. Preparing to Put Nuclear Bombers “Back” on 24-Hour Alert?

As I am writing early this morning, the following headlines glided across my screen…

North Korea is “mass producing biological weapons” and could unleash smallpox, cholera, plague and anthrax on US troops… “This chilling prospect is laid bare in a shocking report which states highly infectious diseases could be spread via a missile, drones, planes and sprayers.” – The Sun, Oct. 22

If you are not familiar with all three long-range conventional, nuclear-capable U.S. bombers in service, here is quick summary to get up to speed… 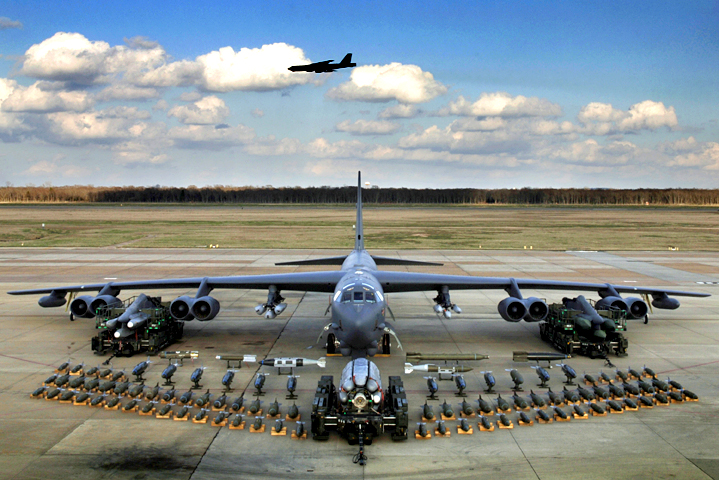 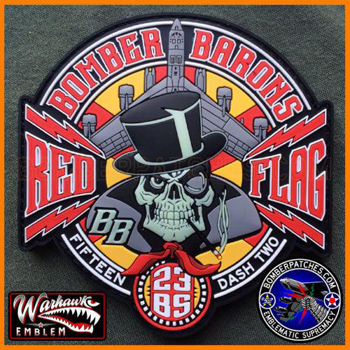 Serving the U.S. for Decades to Come… “The Boeing B-52 Stratofortress provides the United States with immediate nuclear and conventional global strike capability…On August 2014, the B-52 Stratofortress celebrated 60 years in the air. The eight-engine, 390,000-pound jet was America’s first long-range, swept-wing heavy bomber. It began as an intercontinental, high-altitude nuclear bomber, and its operational capabilities were adapted to meet changing defense needs.  B-52s have been modified for low-level flight, conventional bombing, extended-range flights and transport of improved defensive and offensive equipment — including ballistic and cruise missiles that can be launched hundreds of miles from their targets… In May 2014, The Air Force introduced the first B-52 aircraft upgraded with an advanced communications system developed by Boeing into its fleet. The Combat Network Communications Technology (CONECT) modification added several communication data links, full-color LCD displays with real-time intelligence feeds overlaid on moving maps, a state-of-the-art computing network, and the ability to retarget a weapon, or mission parameters, in flight. At that time, the Air Force operated 76 B-52s primarily out of Barksdale Air Force Base, La.; Minot Air Force Base, N.D., and Andersen Air Force Base, Guam, and planned to upgrade all of them.” – Boeing 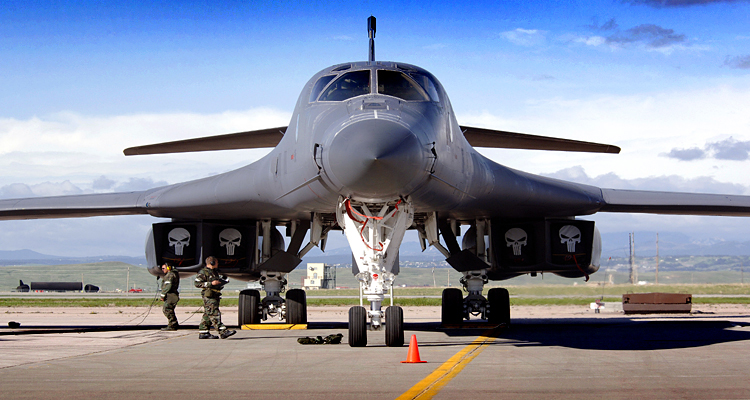 The Bone… “The B-1B Lancer is a long-range, multi-mission, supersonic conventional bomber, which has served the United States Air Force since 1985. The aircraft is on track to continue flying, at current demanding operations tempo, out to 2040 and beyond, and Boeing partners with the Air Force to keep the B-1 mission ready. Originally designed for nuclear capabilities, the B-1 switched to an exclusively conventional combat role in the mid-1990s. In 1999, during Operation Allied Force, six B-1s flew 2 percent of the strike missions, yet dropped 20 percent of the ordnance, and during Operation Enduring Freedom the B-1 flew on 2 percent of the sorties while dropping over 40 percent of the precision weapons. The B-1 has been nearly continuously deployed in combat operations over Afghanistan and Iraq since 2001.” – Boeing 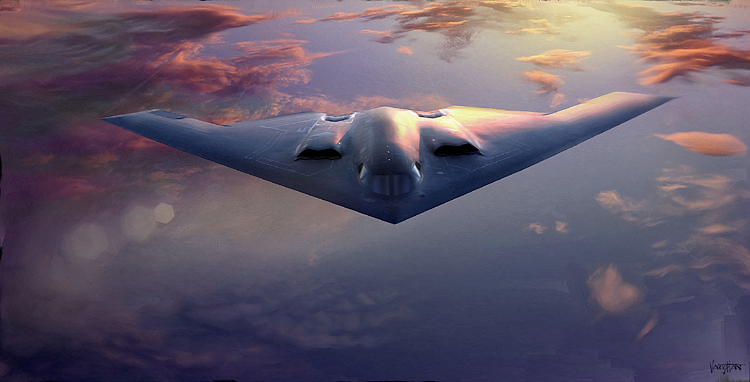 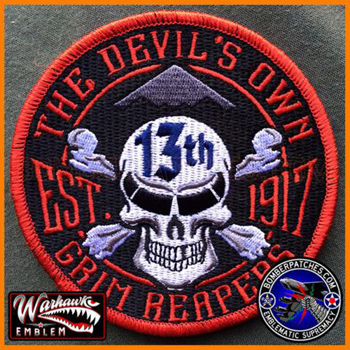 Centerpiece of Long Range Strike… “The U.S. Air Force’s B-2 Spirit Stealth Bomber is a key component of the nation’s long-range strike arsenal, and one of the most survivable aircraft in the world. Its unique capabilities, including its stealth characteristics, allow it to penetrate the most sophisticated enemy defenses and hold at risk high value, heavily defended targets… The B-2 is the only U.S. aircraft that combines long range, large payload and stealth in a single platform, giving it the ability to project air power anywhere in the world. It can fly 6,000 nautical miles unrefueled and 10,000 nautical miles with just one aerial refueling. With its ability to carry more than 20 tons of conventional and nuclear ordnance and deliver it precisely under any weather conditions, the B-2 also has the ability to change the outcome of a conflict with a single mission.” – Northrop Grumman

For some time, Russia has approached and violated sovereign airspaces across the globe, precipitating numerous interceptions by U.S. and NATO aircraft.  The purposes of such flights are aerial reconnaissance, to probe an enemy’s response time, light up their anti-aircraft capabilities, and send a message.

Typhoons Intercept Russian Supersonic Bombers… “The two ‘Blackjack’ bombers were flying in the UK area of interest when spotted on radar and then safely escorted until they turned for home… The Tupolev Tu-160’s are able to fly at Mach 2.05 (1380mph) and with its four crew are capable of delivering 12 short-range nuclear missiles… The first post-Cold War encounters between the RAF and Russian Tu-160’s were in 2007 when Vladimir Putin announced the resumption of ‘strategic aviation flights.’” – Forces, Oct. 10, 2017

More recently, due to the rhetoric, along with intercontinental ballistic missile and nuclear testing by North Korea, the U.S. and its Asian-Pacific allies have conducted several war game exercises around the Korean peninsula.  On Saturday, September 23rd, U.S. Air Force B-1B Lancer conventional bombers and F-15C fighter jets flew north of the demilitarized zone (DMZ) within international air space in the Sea of Japan, just off North Korea’s eastern coast.  Provocative?  Yes, but given the circumstances, it is an absolute necessity to conduct reconnaissance for mission-ready response.

Which brings us to the recent headlines in question…

EXCLUSIVE: US Preparing to Put Nuclear Bombers Back on 24-Hour Alert… “’This is yet one more step in ensuring that we’re prepared.’ Gen. David Goldfein, Air Force chief of staff, said in an interview during his six-day tour of Barksdale and other U.S. Air Force bases that support the nuclear mission. ‘I look at it more as not planning for any specific event, but more for the reality of the global situation we find ourselves in and how we ensure we’re prepared going forward.’ Goldfein and other senior defense officials stressed that the alert order had not been given, but that preparations were under way in anticipation that it might come. That decision would be made by Gen. John Hyten, the commander of U.S. Strategic Command, or Gen. Lori Robinson, the head of U.S. Northern Command. STRATCOM is in charge of the military’s nuclear forces and NORTHCOM is in charge of defending North America.” – DefenseOne, Oct. 22

Air Force denies report that nuclear bombers are being prepared for 24-hour alert… “The Air Force is not preparing to put its B-52 nuclear bombers on 24-hour alert, the service said Monday, adding that a misunderstanding might have led to a report claiming those preparations are underway.  Updates to facilities, exercises, and training related to the B-52 Stratofortress aircraft at Barksdale Air Force Base in Louisiana are done routinely to ensure the service is prepared, said Ann Stefanek, the chief of Air Force media operations at the Pentagon.  ‘We are not planning or preparing to put B-52s back on alert,’ Stefanek said.” – Washington Examiner, Oct. 23

In my humble opinion, the difference between those two articles is nothing but semantics.  If you believe the U.S. has not or does not currently have protocol and hardware in place for mission readiness, no matter the specific aircraft, platform, or location, you’re dreaming.  The status quo of Mutually Assured Destruction (MAD) policy remains. Current arms control efforts are aimed at finding a minimum MAD.  Any Strategic Defense Initiative (SDI) or National Missile Defense (NMD) are only supplementary backups within an integrated platform.

God Will Judge Our Enemies, We’ll Arrange The Meeting 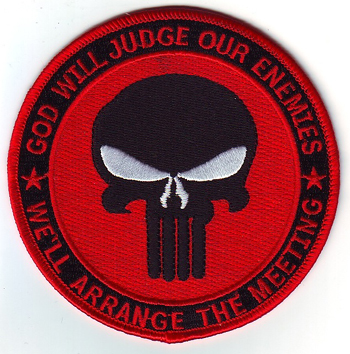 Bone Deep: The Relationship Between The Punisher And The Military… “But his aim, his goal, the intent of what he’s trying to do — it’s justice, it’s reciprocity, it’s revenge.” – TaskAndPurpose 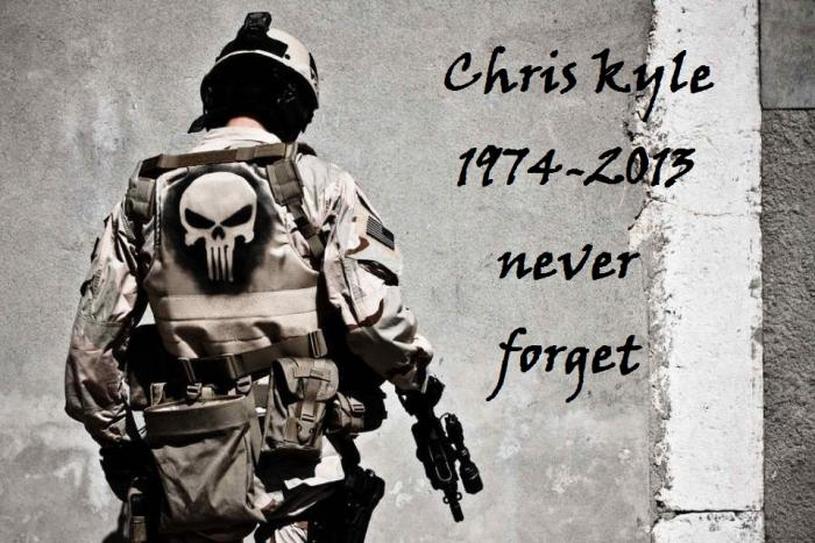 The Military Skull Art Inspired by The Punisher… “The Navy’s SEAL Team 3 paints The Punisher’s skull symbol on its military gear. Reporting on former SEAL Team 3 sniper Chris Kyle (who claimed to have made 255 kills, which would make him the most lethal U.S. sniper in history), the Daily Mail notes that for SEAL Team 3 the ‘action was enough that the members of the unit adopted the white skull of the gun-wielding comic book vigilante The Punisher.  They painted the symbol on their body armor, their vehicles and even their weapons.’ The New Yorker, reporting on Kyle’s death, also notes the use of The Punisher’s skull symbol by SEAL Team 3:  ‘Kyle seemed to consider himself a cross between a lawman and an executioner. His platoon had spray-painted the image of the Punisher—a Marvel Comics character who wages ‘a one-man war upon crime’—on their flak jackets and helmets.’  Kyle liked the skull symbol so much that he incorporated it into the logo of his company Craft International, which provides tactical training for military and law enforcement personnel.” – Nothing But Comics

What will it be then, tactical nukes for any North Korean mistake? 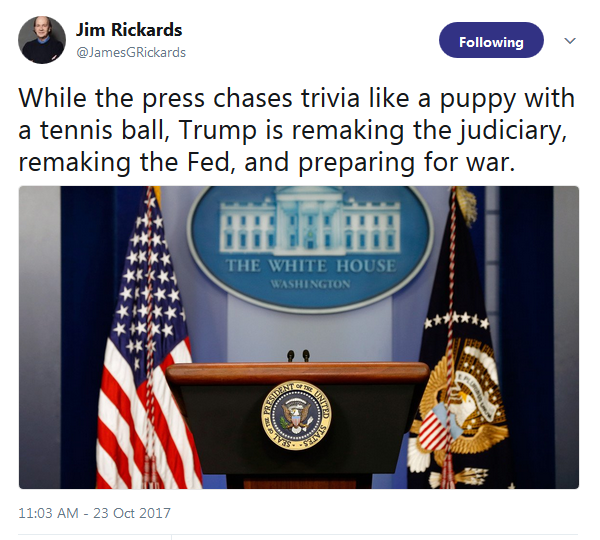 “While the press chases trivia like a puppy with a tennis ball, Trump is remaking the judiciary, remaking the Fed, and preparing for war” – Jim Rickards, Oct. 23