Over the past 72 hours, cryptocurrencies have made a stunning run in the digital markets. The most conspicuous achievement is Bitcoin, the undisputed king of cryptos, which crossed over the $2,000 barrier. This development is occurring against the backdrop of uncertainty and volatility in the international “paper” equity markets. Naturally, many are wondering if the cryptocurrencies are in an unsustainable bubble.

To set some minds at ease, bubbles typically require two elements to be considered as such — a massive valuation explosion and unprecedented participation in the markets. I’m not sure if either criteria has been met for the cryptocurrencies. Although we have seen nominal benchmark targets being exceeded, that by itself doesn’t say much. The question is whether or not the upswing is unsustainable. What we see instead are strong, but stable run-ups.

Obviously, we haven’t seen mainstream acceptance of the cryptocurrencies either. Even though Bitcoin is well-recognized, a large segment of the population have yet to hear about it or fully understand it. Mention Ethereum, Litecoin, or STEEM, and you’re likely to be called up to the loony bin. With all things considered, I would say we are far, far away from a collective, bubble implosion scenario.

Having said that, I’d like to take some time to help the newcomer to the cryptocurrencies. Of some of the major cryptos available, which one is the best bang for your buck right now? For this analysis, I will judge four popular digital currencies based on near-term technical potential. This does not, I repeat, this does not have any bearing on the long-term potential of cryptos, which I consider to be extremely bullish.

So without further ado, let’s get started on our crypto ranking!

Listing Ethereum at the back of the list may sound like sacrilege. But remember, this is not about present performance; rather, it’s about future potential. As such, Ethereum has done extraordinarily well for those that got in before the present rally. But if I had zero position in ETH, I wouldn’t want to jump in right now. 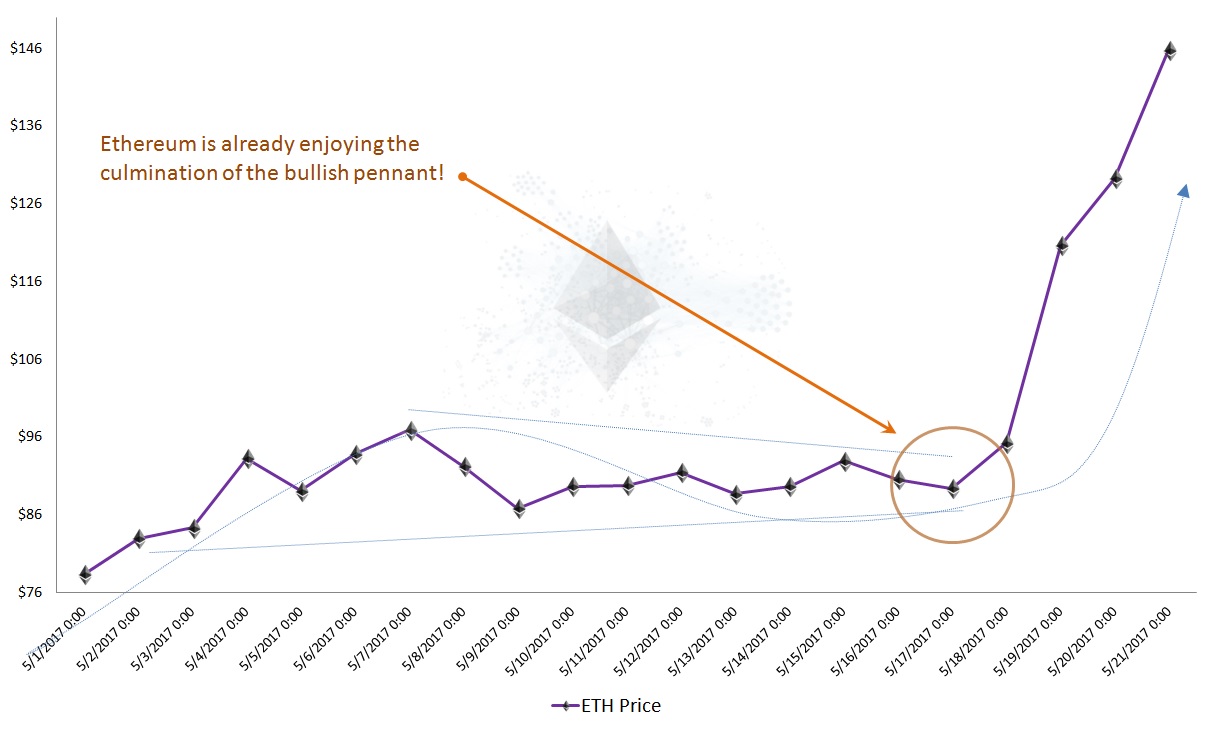 Ethereum has already benefitted from a bullish pennant formation. This is the culmination of bulls and bears driving the asset price down into a tightly condensed consolidation range. At the apex of this range, the price action can no longer be condensed any further. The end result is a breakout move. In Ethereum’s case, the breakout was to the upside.

The king of cryptos will have to take a seat towards the back on this one. Although no one can deny the massive reputation power of Bitcoin, the reality is that the price has gotten nominally rich. Thus, the law of large numbers apply. 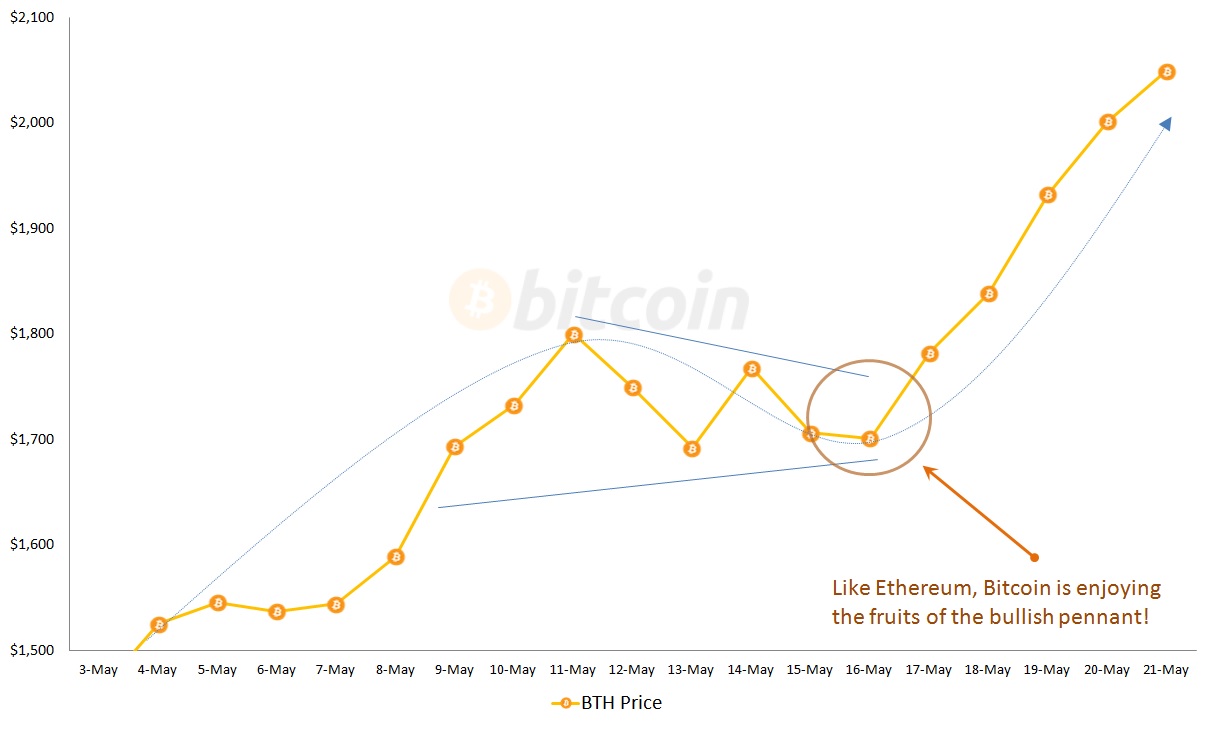 But that’s not a bad thing. Like Ethereum. Bitcoin is benefitting from a bullish pennant formation. Unlike Ethereum, Bitcoin has had a modest run up of around 25%, whereas Ethereum is at least riding a 60% rally. Thus, an investor can still put some money down on Bitcoin right now and have some reasonable confidence of near-term profitability.

STEEM is an explosive cryptocurrency, and is my personal favorite. It is in the process of breaking out of its bullish trend channel, and creating yet another plateau. I’m a firm believe that the days of sub-dollar STEEM is behind us. Therefore, whether we’re talking short-term or long-term, STEEM is, in my humble opinion, a buy. 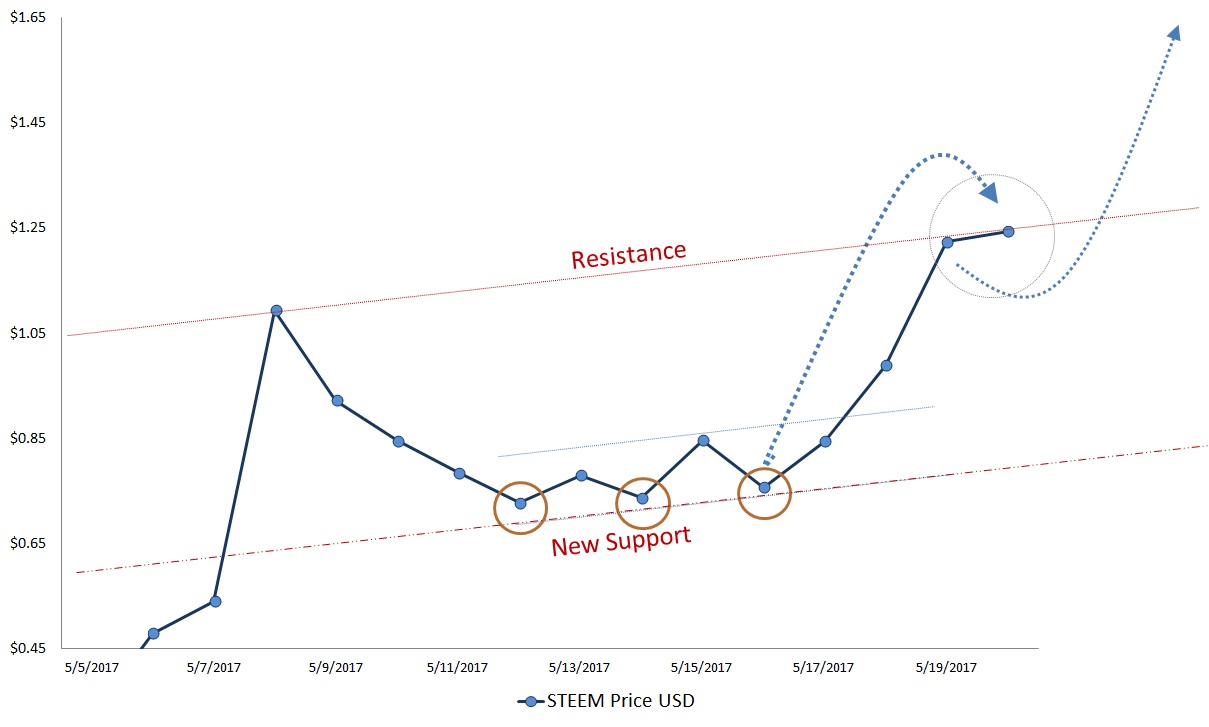 The reason why I didn’t put STEEM into pole position is because its technical posture — while still strong — is not as consistent or reliable as the bullish pennant formation. That should not dissuade you from STEEM, as it is a life-changing opportunity. I’m just trying to present a technically objective analysis.

Once pejoratively considered the “poor man’s Bitcoin,” Litecoin has really come of age over the trailing 30 or 40 day period. Now, Litecoin stands among the giants of cryptocurrencies, with a time of writing price tag exceeding $25. The best part is that of the majors, Litecoin has the strongest technical posture. 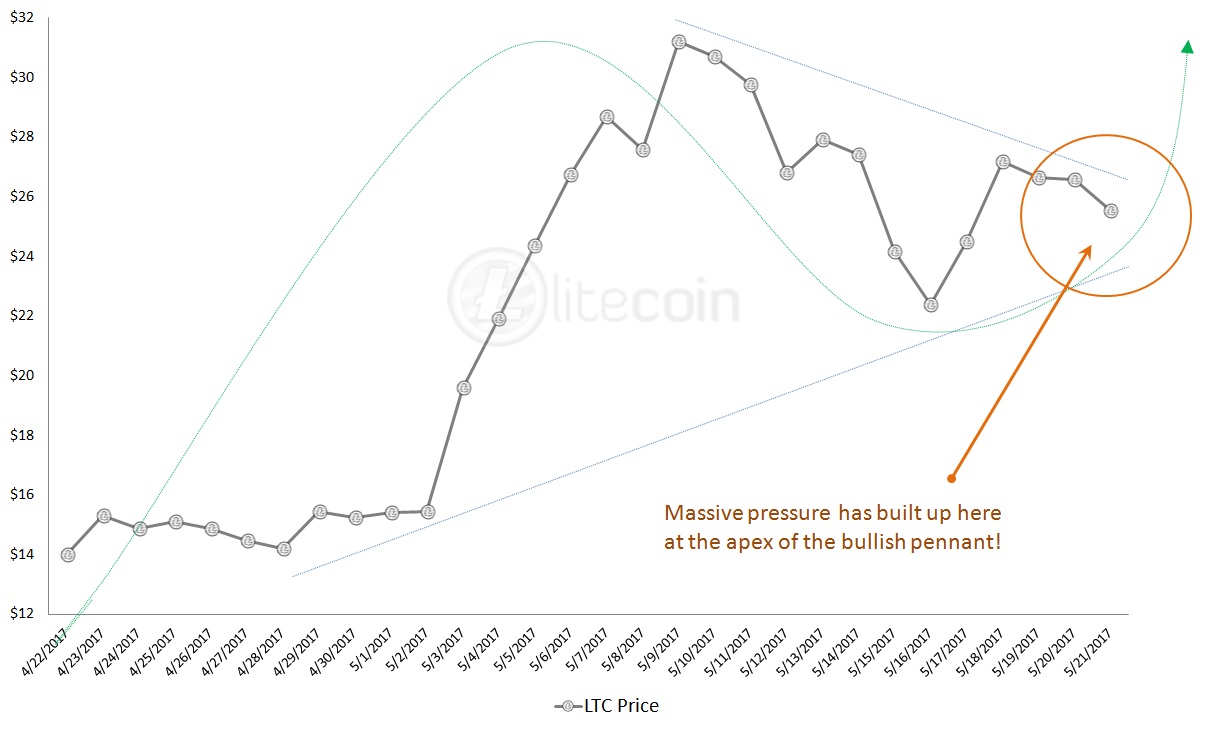 Similar to its bigger brethren, Litecoin is forming a bullish pennant formation. The difference is that Litecoin is lagging the other two, meaning that it’s in the middle of development. Based on the massive explosion of Ethereum, we could easily see Litecoin hit $40 and beyond over the next few weeks.

That’s serious profitability at a price tag that is still very reasonable now that the majors have found their moxy. To me, Litecoin is just like Bitcoin or Ethereum, but at a steep discount!

Disclaimer: Josh Enomoto is long all of the mentioned cryptocurrencies.