Bitcoin has been making significant moves as of late. Just a week ago, the king of cryptocurrencies was trading around $1,180. Although it had finally cracked back into four-digit territory following a sharp correction early in the year, the sideways consolidation was frustrating for many investors. After all, digital currencies are steadily becoming the new normal — and that means massive opportunities in days, not years.

Still, we may have gotten a bit spoiled by the rise of bitcoin. Half a year ago, bitcoin was trending at the $800 mark — give or take a few bucks. At time of writing, bitcoin breached the $1,250 level, bringing our trailing half-year return to more than 56%. This is the kind of consistent performance only available to cryptocurrencies — you’re just not going to get this performance out of the bland S&P 500.

For the doubters and critics of digital currencies, the discipline of technical analysis — ironically, a discipline that has finally found acceptance on Wall Street — forecasts bigger moves in bitcoin. From where we’re standing, the next upside target is $1,600. 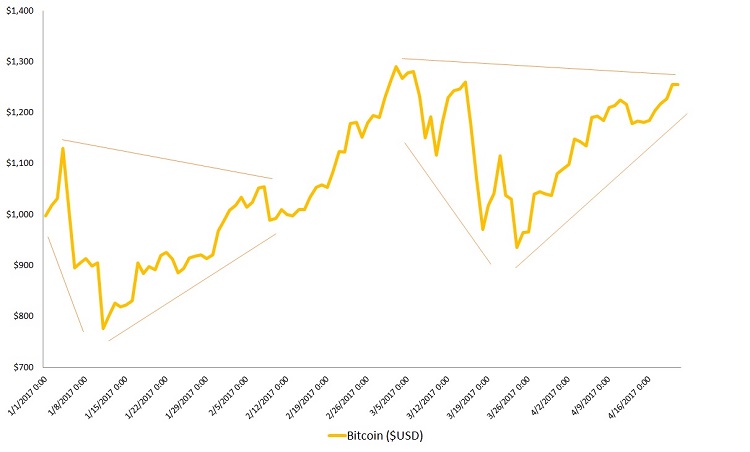 Let’s take a look at the most recent reading for bitcoin. Right now, the blockchain-fueled asset is at the tail end of a triangular consolidation pattern. This is a three-step pattern comprised of 1) initial peak 2) sharp correction and 3) return to peak. From the number three point, we can expect a sharp directional move, either to the upside or down.

If we consult technical analysis, and refer to past patterns, we’ll notice that the triangular consolidation occurred earlier this year. Bitcoin broke above $1,100, then crashed mightily. However, it began a steady recovery. At the apex of the triangle, bitcoin then launched into an attack of the $1,300 level, which it just barely failed to breach. From there, we entered the consolidation phase which we are in now.

If we assume a similar response, we can expect a 30% swing higher, which would bring bitcoin to $1,600. From a purely technical perspective, the odds favor this upside swing. Momentum is scorching hot, and newcomers are increasingly buying into cryptocurrencies.

So the major risk factor I see are the fundamentals. For digital currencies that are not tethered to the performance of a company, the fundamentals are related to user engagement rates. In other words, how likely is it that cryptocurrencies will be integrated into greater society?

This is solely my opinion but I say extremely likely! An increasing number of countries, such as Japan, consider bitcoin to be a legitimate currency. Popular companies, like DISH Network, allow their members to pay their bills in bitcoin. To me, the integration equation is rising, not declining. So the forecast accuracy of bitcoin then gets sent back to the technicals.

But we already know what the charts say!