The Remarkably Easy Case for $500 Ethereum

Still, broader acceptance is harder to come by. Business media outlets are just now writing about bitcoin as a legitimate alternative to paper equity markets. This, after the cryptocurrency is knocking on $3,000! If timing were a virtue, the mainstream media would be shut down in a heartbeat.

Aside from the lack of proper context, the dearth in information towards digital currencies substantially hurts the retail investment markets. That’s because contrary to perception, bitcoin isn’t the only proven cryptocurrency. Ethereum, with a market capitalization of $31.3 billion, is ranked number two among all digital currencies.

And this year could go down as the year that ethereum truly comes of age.

Indeed, ethereum could secure an astounding benchmark accomplishment — $500 per coin, perhaps, even by the end of this year.

Now that’s an audacious statement considering that earlier this year, ethereum was trading in single-digit territory. At time of writing, ethereum is trading in a range between $330 and $340. However, the case for $500 is a lot easier than it appears to the “naked eye.” 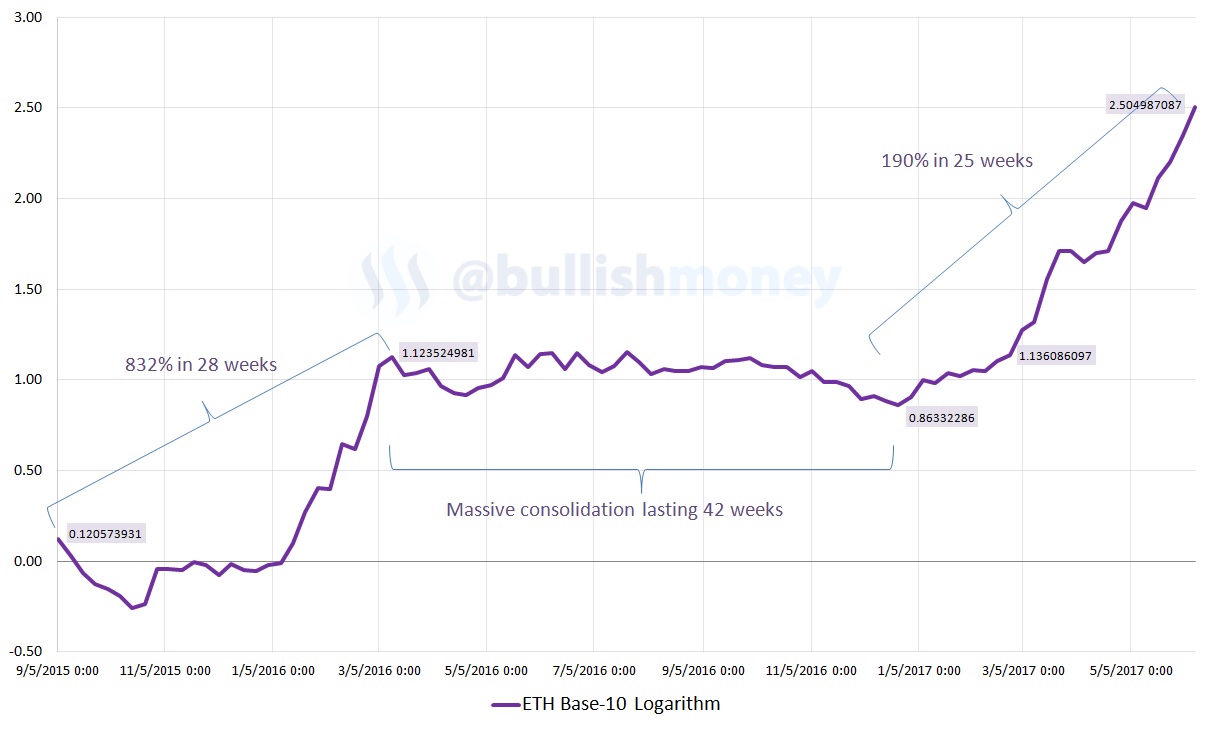 First, the magnitude jump to $500 isn’t really that stressing. From $330, this would only be a 51% swing higher. We’ve already witnessed multiple leaps in valuation that hit 50% or higher over the last few months.

Second, the law of large numbers is dramatically working in our favor. Just 12 hours ago from this time of writing, ethereum was trading around $270. Although investors who bought a full coin at that time have now profited $60 to $70, this was only a 26% move. Given the mass enthusiasm surrounding cryptocurrency markets these days, a series of small moves could quickly get us to the $500 mark.

Naturally, with so much valuation gained in such a short period of time, the question that comes up is whether or not ethereum is in a bubble.

Admittedly, when the number-two cryptocurrency touched and exceeded the $200 level, I was worried. Perceptually, it seemed too fast, too soon. But upon examining the entire history of ethereum (using a base-10 logarithmic chart), I’m far less convinced that it’s in a bubble.

When ethereum was first launched, it enjoyed a 832% introductory rally that lasted 28 weeks. From there, the cryptocurrency went into a largely sideways consolidation lasting a frustrating 42 weeks. Only recently has ethereum demonstrated the promise of a bona fide bitcoin rival.

Currently, ethereum is riding a 190% rally that has taken place over the last 25 weeks. While this is no doubt an impressive run, it’s not nearly to the same percentile magnitude as its initial run. So I’m not yet ready to call it a bubble until we truly go parabolic.

The long consolidation pattern also suggests the existence of built-up pressure. Keep in mind that ethereum has been in consolidation for 14 more weeks longer than it has been rallying. That possibly indicates we may see greater upside moves.

Overall, the case for $500 ethereum is an easy one to make at this juncture. We’ve seen far more massive moves in digital currencies, so a 50% profit is well within reason. Finally, the law of large numbers is now going to work overtime for both bitcoin and ethereum!