Is the Ripple Price Set for Another Big Move?

While bitcoin prices soared, then later faltered, we saw an unusual development within the “blockchain markets.” Typically, cryptocurrencies tend to follow bitcoin’s ebb and flow. This applies not only to major altcoins, such as ethereum or litecoin, but also to the thousands of digital tokens now traded in exchanges throughout the world.

But one virtual currency challenged the notion that the entirety of the blockchain had to follow bitcoin. Ripple, the bank-owned blockchain network, went completely against the grain, rising more than four-fold to all-time record highs. Currently, the ripple price stands at $1.26, more than a dollar up from early December.

This is simply astonishing. One of the biggest moves in cryptocurrencies occurred in bitcoin cash, which was trading at around $1,400 at the beginning of this month. Now, bitcoin cash trades hands at over $3,000. The bullish sentiment is understandable: bitcoin cash is the quicker, more efficient version of bitcoin. Coinbase recently greenlighted it. I can easily see a case for $10,000 bitcoin cash.

But a $1 ripple price? Even though this milestone is etched firmly in reality, part of it makes little sense. If there was ever an odd-man out among cryptocurrencies, ripple would be it. The vast majority of crypto proponents love the blockchain for the freedom it engenders. And from whom do we need freedom? The big banks, of course!

So it’s reasonable to ask: why in the world would anyone who values decentralized and transparent markets opt for a blockchain network whose very existence is governed by centralization and kleptocracy? It’s one of the nagging arguments that prevent full trust and adoption of ripple, let alone the chasing of the ripple price.

Still, speculators who are far less ideological about their portfolios are constantly on the lookout for the “next big thing.” Ripple could potentially provide that roadmap. At a little over $1, the Ripple price is just right for those who may have missed the boat on bitcoin and other major altcoins. Also, the fact that big banks endorse the ripple network provides an aura of confidence lacking in other cryptocurrencies. 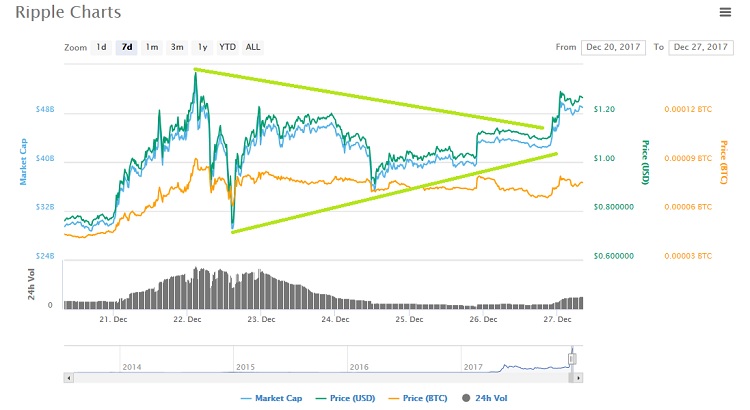 Furthermore, the seven-day chart indicates that a massive bullish move could be around the corner. A bullish pennant formation is evident, which has usually proven accurate in forecasting significant breakouts. In other words, don’t be surprised to see a $2 ripple price in the near future.

At the same time, I would caution investors in betting too heavily on ripple. At nearly 40 billion outstanding coins, there’s too much supply relative to bitcoin and rival altcoins. Furthermore, if the ripple price hit double digits, its market capitalization would hit at least $380 billion, or more than 40% bitcoin’s current market cap.

That truly doesn’t make any sense at all. Ripple could be a shrewd, short-term trade, but don’t get too excited about it.