Another day, another loss in the Dow Jones. The venerable index again put up a disappointing performance earlier today, shedding 174 points, or down 0.72% from the prior session. The other indices, the S&P 500 and the Nasdaq, didn’t fare that much better.

My Crush The Street colleagues have largely been consistent in warning against overexposure to the U.S. stock market, but it’s worth remind where we are. Year-to-date, the Dow Jones is down nearly 3.6%, contradicting the supposed economic recovery under both the Obama and Trump administrations.

Interestingly, the gold market hasn’t necessarily performed that well, either. The average price of gold bullion is virtually at parity since the start of this year. Nevertheless, at slightly above $1,300, we’re well above the $1,000 support line that was under threat during late 2015, early 2016. 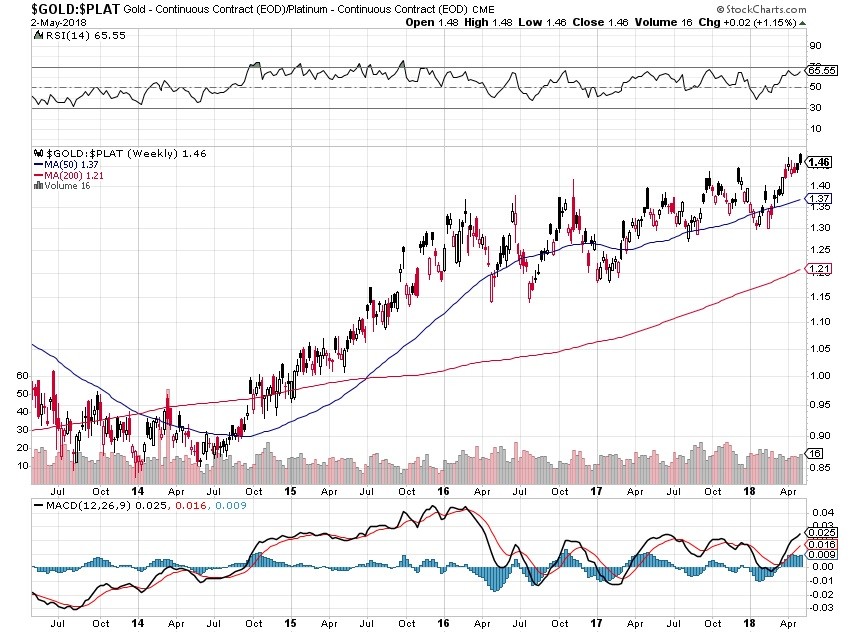 Thus, against a longer-term framework, gold bullion have performed their traditional role as safe-haven assets. But here’s where it gets even more interesting: gold is the only precious metal this year that’s technically in positive territory.

Every other publicly-traded precious metal – silver, platinum, palladium – is down, and down sharply.

That by itself should be alarming. The U.S. Dollar Index (outside of recent trades) has largely cratered since President Trump took office. Thus, we should see most commodities, especially precious metals due to their rarity, rise higher. But that’s not at all what we’re witnessing.

Furthermore, the gold premium relative to platinum is startling. It’s often stated that all the gold mined throughout human history can fit in a single, Olympic-sized swimming pool. But if that’s the case, all the platinum ever mined would fit inside an average-sized living room. The differential is simply stunning!

This is the reason why platinum typically trades significantly higher than gold, which makes perfectly logical sense. Platinum supply is roughly 10% that of the yellow metal; at the very least, platinum should be a few basis points higher than gold.

Again, observational data contradicts the logical deduction. Currently, the gold premium is $1.46, meaning that the traditional safe-haven asset trades at a 46% premium over the platinum spot price. That, my friends, is sheer lunacy.

But it also points to another worrying concept. Platinum is used exclusively for industrial purposes. As such, actual, available supply decreases over time. But since the platinum price is underperforming relative to gold, it indicates that industrial demand is at least stagnant. Put another way, platinum isn’t being used up like it used to.

Do insiders recognize that the stock market is about to roll over? Stay vigilant, my friends!