Over the past several weeks, I’ve had to turn off all distractions due to a ramp-up in workload. One of the things that I immediately tuned out was my television, which was fine by me. Aside from very few programs, all I used my TV for was keeping up with the news. Unfortunately, the mainstream media has dominated the discussion with Russia, Russia, Russia.

Recently, during a lull in my schedule, I turned on my TV set. Sure enough, more Russian collusion stories entered my living room. It’s truly remarkable that more than a year after President Trump’s inauguration, the media is still chasing after fairy tales. That being said, I believe the media is successful at wearing down the Trump administration, which actually bodes well for burgeoning marijuana sales and the broader cannabis issue.

Marijuana legalization is a hot-button topic for any political party; however, it’s a tricky minefield for President Trump. Famously, he ran on a “law and order” platform, and he placed Senator Jeff Sessions as the nation’s Attorney General. Sessions is no stranger to tough talk on cannabis and other “social ills,” putting marijuana legalization, and by direct logical deduction, marijuana sales, at risk.

That said, Trump needs real, tangible victories that will encourage people to vote Republican in the midterm elections, and for him personally in 2020. Truly, there’s no better way to do this than putting money in people’s pockets. Aside from outright bribery, marijuana legalization initiatives will do just that.

Colorado is a living proof-of-concept when it comes to the dramatic, positive impact that marijuana sales can have on the economy. Starting in 2014, marijuana sales accounted for slightly less than $700 million. By the end of 2016, “green businesses” hauled in over $1.3 billion. Recently, Colorado disclosed that cannabis revenues took in a record $1.5 billion! 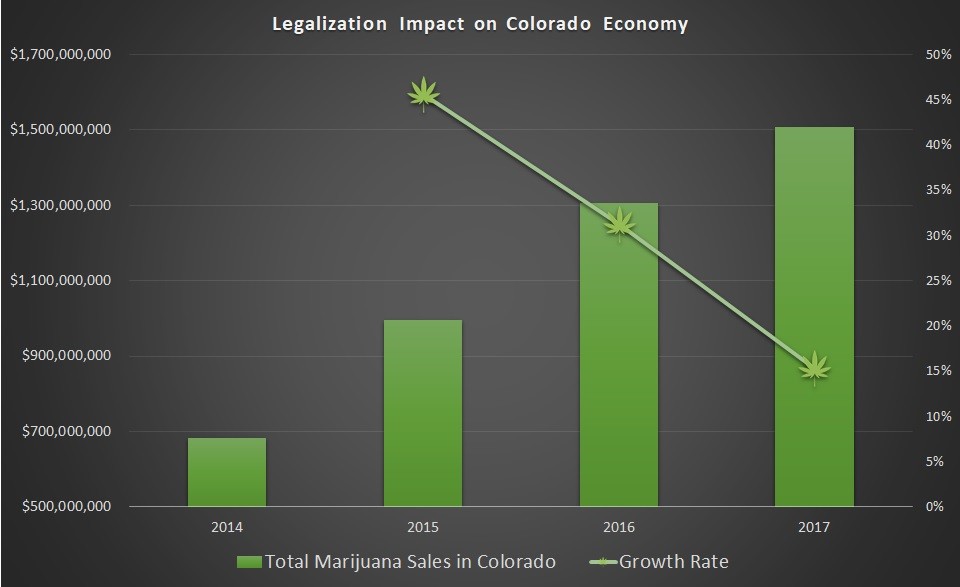 If you’re doing the math, we’re seeing strong double-digit growth in marijuana sales – just under 31%, to be more specific. This level of enthusiasm and sentiment towards “botanical industries” confirms that the entire country can benefit from marijuana legalization.

While I understand President Trump’s position in the “law and order” department, I think he has to simply look at the numbers. Without much investment in infrastructure, the U.S. could become a cannabis powerhouse. Such measures would also curtail the rapid – and worrying – decline of our agricultural industries.

This administration has the unique opportunity to turn around a sinking ship. Best of all, they don’t have to dig that deep or go to the ends of the earth. They merely need to reconsider the marijuana legalization debate. Irrationality is currently trumping real results.