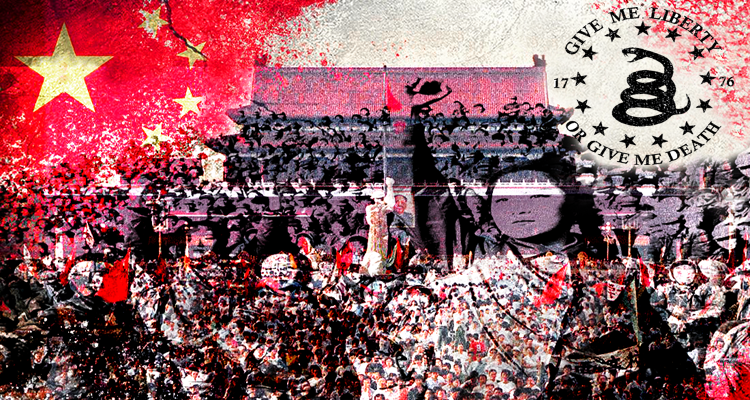 Protests escalated in China this weekend (#ChinaProtests) due to the CCP’s zero-COVID policy and draconian lockdown of hundreds of millions of people for the last three months. If you’re attached to the global financial industry, it is the single most important story to keep an eye on this week. If the unrest escalates further and President Xi cracks down with the military at some point, expect a pronounced impact on multiple sectors of financial markets in addition to any positioning that takes place overnight and tomorrow morning in the West. President Xi is unlikely to tolerate dissent. The vast number of simultaneous protests in China’s key cities across the entire country is unprecedented. Some well-qualified analysts have expressed concerns that “China is on the verge of descending into chaos.” The Wall Street Journal opined today that “having protests over the same issue break out in multiple Chinese cities is unheard of, outside of nationalist outpourings, such as anti-Japanese protests.”

The spontaneous protests in the last few days are a rare display by a citizenry that’s viewed as complacent after crackdowns on dissent intensified following the brutal suppression at the Tiananmen Square pro-democracy demonstration in 1989 and the political dismantling of Hong Kong’s democracy that unfolded in 2021. A privately managed Tiananmen Square museum in Hong Kong was shut down by CCP authorities in June 2021 based on a charge of “incitement to subvert state power.” Fortunately, the museum was digitized and moved online before the physical contents were confiscated.

Are we witnessing a replay of sentiment in the population that launched the Tiananmen Square demonstration? That protest lasted until military units and tanks arrived from outside the local area, gave birth to the famous “Tank Man” photograph, and soldiers fired upon the protesters and brought it to a bloody end. Any survivors were arrested, imprisoned, reeducated, or exterminated.

Legacy media in the West has focused on a deadly apartment building fire in Urumqi, in the western Xinjiang region, as the reason behind the protests. Many people were burned alive because they couldn’t escape from homes with doors welded or bolted shut as per lockdown policies. It’s been reported that local leaders were competing to see who could get away with the most stringent lockdowns and falsely believed they would have better results.

“On Nov 23-24, when a fire broke out in Urumqi, people’s doors were locked from outside. Fire trucks couldn’t get closer either (see my previous tweet). The latest figure says 44 were burnt to death, including a 3 y/o kid. That’s one of the reasons for today’s protests.” – Jennifer Zeng Video, Nov. 25 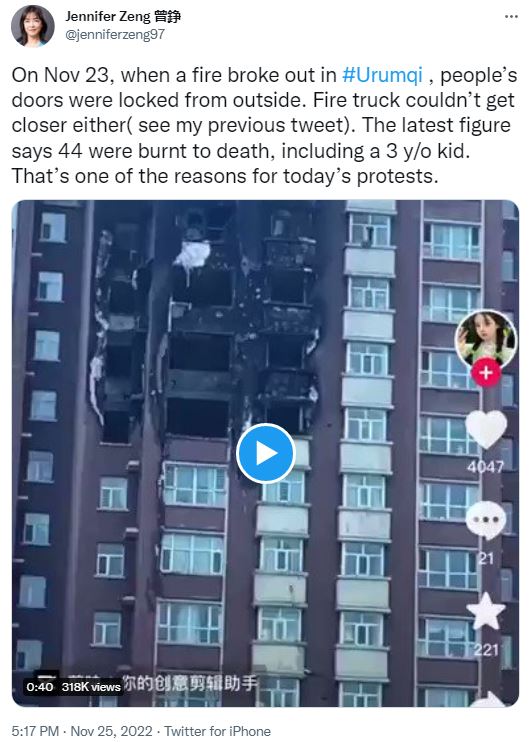 The protests actually began in late October at the Foxconn iPhone factory in Zhengzhou when employees protested over lockdown-related unsafe working conditions, rioted, quit their jobs, and fled the premises on foot to avoid being detained and/or sent to quarantine camps. Thousands of replacement workers were hired under a new contract and eventually protested for similar reasons as the previous workers, along with a wage dispute.

The second trigger was the 2022 FIFA World Cup tournament televised from Qatar. China’s population noticed that nobody wore a mask, there were no social restrictions, daily COVID testing wasn’t required, and they suddenly realized they were living in a restricted world under draconian lockdowns. That visual display of freedom burst China’s propaganda bubble. Third, a Chinese netizen posted 10 questions to the National Health Commission about COVID and the lockdowns that circulated widely in China, but the CCP deleted his online account. Lastly, the apartment building fire in Urumqi was a turning point that encouraged extensive protests across the country, including in front of government buildings, and in Beijing.

“For the second day in a row, China has recorded an explosive increase in coronavirus infections. In the city of Guangzhou, the capital of Guangdong province, which has the largest number of cases, the construction of a quarantine center for 80,000 people has begun.” – NextaTV Video, Nov. 2 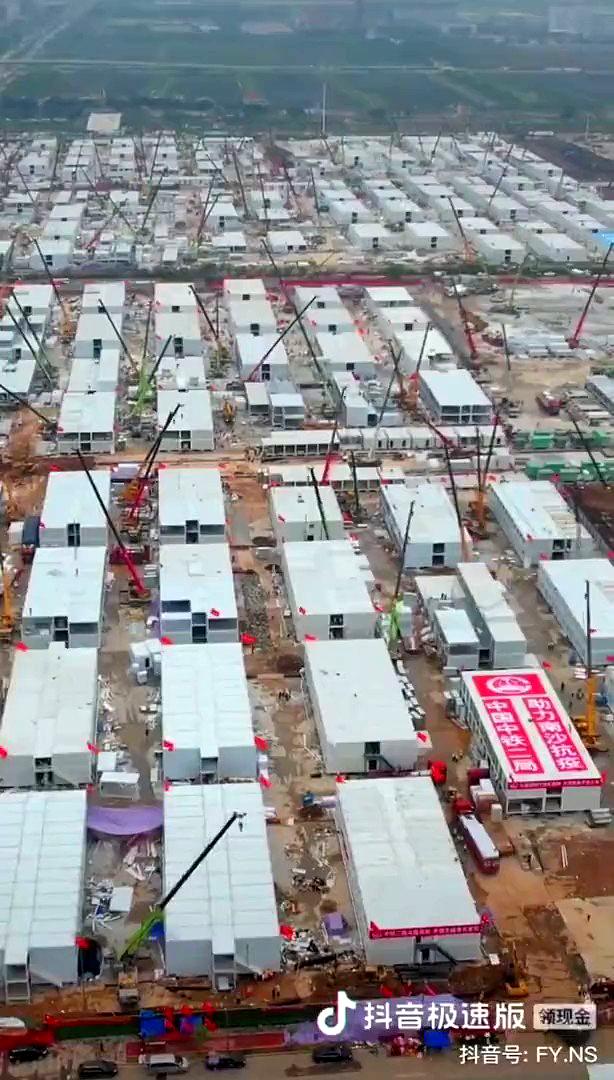 Unlike in 1989, the Chinese people have gone straight to the root of the problem: the CCP is destroying China economically and spiritually. Massive lockdowns over the last three months escalated with increasing reports of COVID infections. The citizenry has had enough tyranny, quarantine, and death. What’s noteworthy in the current uprising is that fellow protesters have rescued their comrades from the grips of riot police as they made arrests and were putting them into cars or busses to be taken away. I’ve perused dozens of videos that escaped China’s controlled media and noted a few quotes that the people are chanting:

The protests include university students and regular folks alike. Ground zero of the COVID pandemic was supposedly Wuhan, China. The “Great Reset” panopticon surveillance state infrastructure is in use throughout all of China’s major cities, which includes facial recognition, various biometrics, and social credit scores. Everyone stepping out into the streets is putting themselves at a huge risk and will suffer the social and financial ramifications of being identified. Will 1.4 billion people allow the CCP to control them? 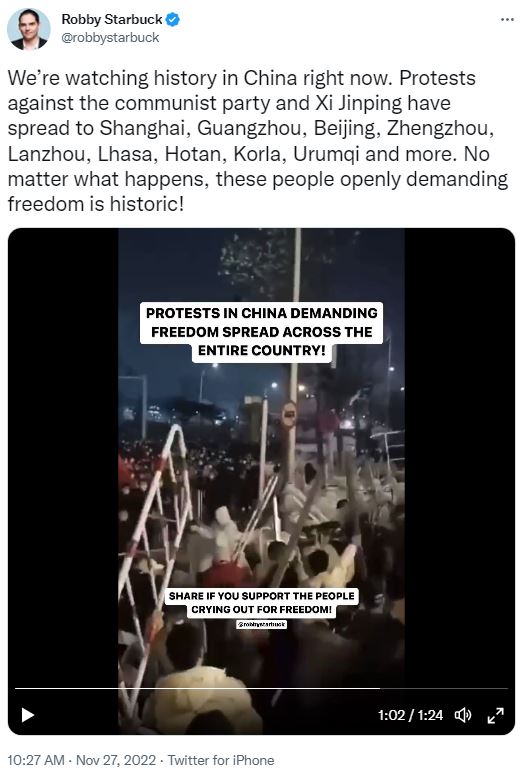 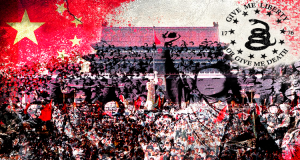