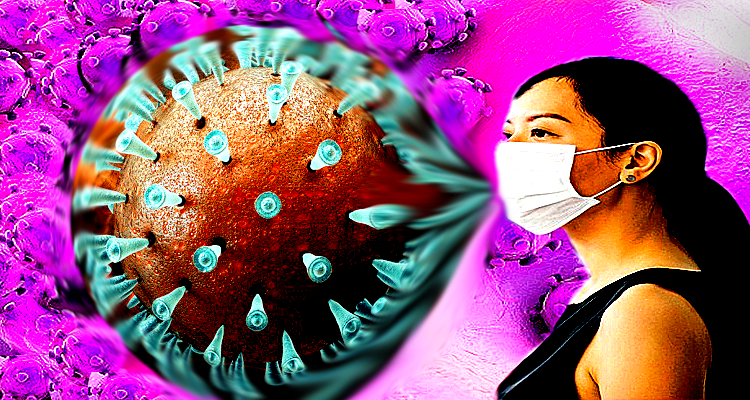 Severe acute respiratory syndrome (SARS) is a deadly viral illness caused by the coronavirus that was identified during a 2003 outbreak in Asia. U.S. stock markets were volatile in pre-market trading today and declined midday on reports that a U.S. citizen in Seattle contracted the coronavirus superbug from China. There are concerns that a new pandemic may blunt any REPO-induced momentum as the Federal Reserve reports that riskier corporate debt threatens the financial system’s stability and the IMF warns of risk for another Great Depression.

In a Squawk Box interview with Paul Tudor Jones released from the annual Davos meeting this morning, he described the stock market as “explosive” and reminiscent of early 1999. He also made a point that the new SARS outbreak is a potential “curveball” and ”a big deal” that needs to be monitored. He recommends that traders not be long in the market until it is determined how virulent the outbreak is. The stock market appeared to be making a recovery during the 3 pm bewitching hour but resumed its rollover into the close and remained in the red.

1st confirmed case of new Coronavirus reported in US: CDC… “The first case of the new Coronavirus that has sickened nearly 300 people in Asia has been reported in a patient in Washington state, the Centers for Disease Control and Prevention said in a Tuesday news conference. At least six people have died, according to officials. Chinese authorities have said the outbreak began in a seafood and live animal market in the city of Wuhan, China. The Washington state patient, a man in his 30s, had traveled to Wuhan, but said he did not visit the market in question or know anyone who was ill. Cases have also been reported in Beijing, Shanghai, Shenzhen, Taiwan, Japan, Thailand, and South Korea.” – ABC News

Global Stocks Sink On Wuhan Worries, Bonds Bid Back To 2020 Highs… “My name is coronavirus… and I remember everything.” – Zerohedge

It is important to note that patient zero in the U.S. arrived from China on Jan. 15, then transferred to a second aircraft that landed in Seattle. He self-reported his illness at Providence Medical Center on Jan. 19, which is 30 miles north of Seattle and translates into 2 flights and four days as a virus carrier before hospital admission. In most cases, you would not know whether you have a coronavirus or a different cold-causing virus, such as rhinovirus. If a coronavirus infection spreads to the lower respiratory tract it can result in pneumonia.

Dr. Henry Niman PhD. (his recombinomics Website is in the middle of redesign – see his Twitter feed and forum) documented the current outbreak on alternative media as a guest on the Jeff Rense show last evening (in the first hour at the 19:20 timestamp). The strain responsible for the current outbreak matches the previous SARS virus transmitted by Bat meat, and the Wuhan market sold Bat. “There are 40,000 coronavirus strains in the database and these two strains were easily identifiable because the gene sequences are almost identical.” There is virulence with this particular infection and it has the potential to morph into a pandemic. The “Center for Disease Control (CDC) doesn’t know how many are infected so don’t believe the numbers,” and do not rely on numerical data coming out of China or the World Health Organization (WHO) at this time. The following graphic on coronavirus cases in the Asia-Pacific region appeared on CNN today at 5pm EST. 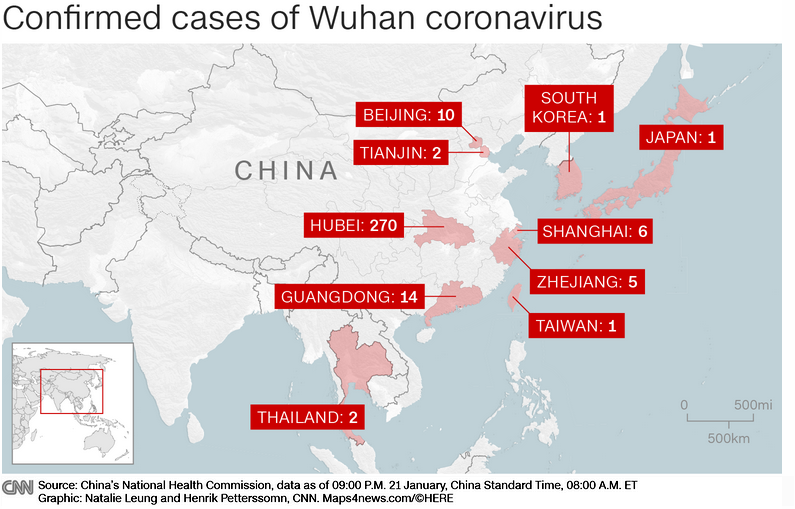 Human-to-Human (H2H) Transmission Confirmed in Novel Coronavirus Outbreak… “‘It has been confirmed that two people in Guangdong province were infected through H2H transmission,’” said Zhong Nanshan, MD, in a CCTV news conference reported on by China Daily. Zhong was the pulmonologist who discovered severe acute respiratory syndrome (SARS) in 2003… The WHO announced on January 20 that it would convene an emergency committee on January 22 to ascertain whether 2019-nCoV constitutes a public health emergency of international concern.” – ContagionLive, Jan. 21

Ground reports from China indicate that pneumonia cases have overrun some hospitals and many patients are sent home for self-isolation. Healthcare workers in China are being photographed wearing hazmat suits. 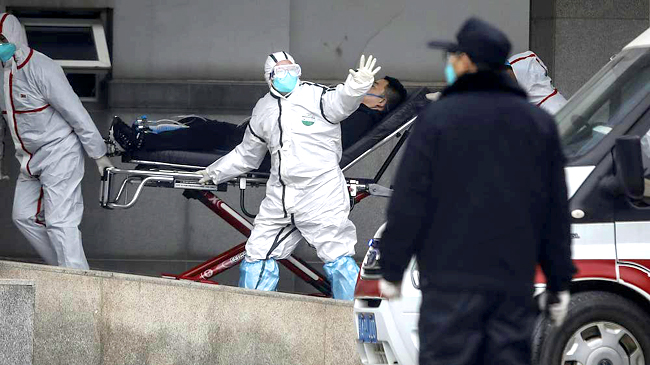 After the seafood and meat market in Wuhan closed on Jan. 8, the sudden rise in new cases made it problematic that they were infected at the market. Authorities in China initially denied any H2H infections until evidence from a second patient cluster showed they were not associated with the market in Wuhan. An additional report from Wandong north of Hong Kong confirmed H2H cases and is the same locale where the 2003 SARS outbreak originated.

IMHO, the most important piece of information is that healthcare workers are infected despite standardized precautions and wearing protective gear. One case cluster was infected by the same patient, which identifies that patient as a “super-spreader.” All of the ingredients from the 2003 SARS outbreak are in place, with super-spreaders and onward transmission by friends and family members to other people by contact. The number of cases and deaths reported by official sources is likely to escalate quickly in the near-term.

China is in the middle of its biggest travel time during the 2020 New Year of the Rat holiday season. The Chinese government estimates that 3 billion trips will be made by citizens to visit family and friends. Approximately 19 million people have already boarded flights from the region where the current outbreak originated. As a comparison, U.S. travelers made 55 million trips over the Thanksgiving holiday period, which is the busiest of the U.S. travel year.

The best way to avoid any type of infection is to keep your hands clean, avoid touching your eyes, nose and mouth, and avoid contact with people who are infected. Physical cleaning and keeping away from people is your only defense. There is no vaccination and no cure available with allopathic medicine.

“When I woke up just after dawn on Sept. 28, 1928, I certainly did not plan to revolutionize all medicine by discovering the world’s first antibiotic, or bacteria killer… It is not difficult to make microbes resistant to penicillin in the laboratory by exposing them to concentrations not sufficient to kill them, and the same thing has occasionally happened in the body. The time may come when penicillin can be bought by anyone in the shops. Then there is the danger that the ignorant man may easily under dose himself, and by exposing his microbes to non-lethal quantities of the drug make them resistant.” – Andrew Fleming, 1945

My Experience in the Microbial Superbug Epidemic… “Antimicrobial resistance is not only an extreme challenge for the patient, but also risks financial destruction if an individual or family lacks the resources to survive the medical needs. What I learned from my experience is to avoid hospital environments as much as possible, educate yourself on the superbug threat without being a germaphobe, and take common sense measures in your daily life to mitigate the risk of any type of infection. A good start is to use old-fashioned hand soap instead of antibacterial cleansers, keep your tummy flora healthy with probiotics, and maintain a supply of a proven natural remedy, such as oregano oil of at least 85% carvacrol strength.” – TraderStef, Apr. 2019 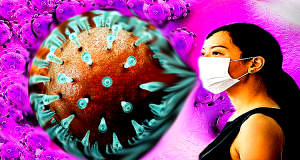