In my last report, I asserted that the notion of white racism leading to the presidential victory of Donald Trump over rival Hillary Clinton was largely a myth. If indeed President Trump was solely elected on the basis of racial politics, then white voters would mostly vote along racial interests. Instead, what we saw was that the white electorate votes on the issues. That, more than any other element like race relations, did in Hillary Clinton.

The leftist bloc willfully chooses to ignore that fact. To them, white racism is alive and well. We apparently have not evolved past the period where racial politics dominated the broader social discourse. When watching pundits and so-called experts rabble on about race relations, one motif is constantly present — they have no data, no facts to back up their wild accusations. If they did, they would come to the conclusion that Donald Trump won because of growing distrust and discontent with Washington politics.

Whether or not white racism led to a Donald Trump victory can be easily calculated by performing a scatter-plot analysis. The two metrics are Trump’s margin of victory or defeat against Hillary Clinton (y-axis), and the percentage of white people in each state (x-axis). 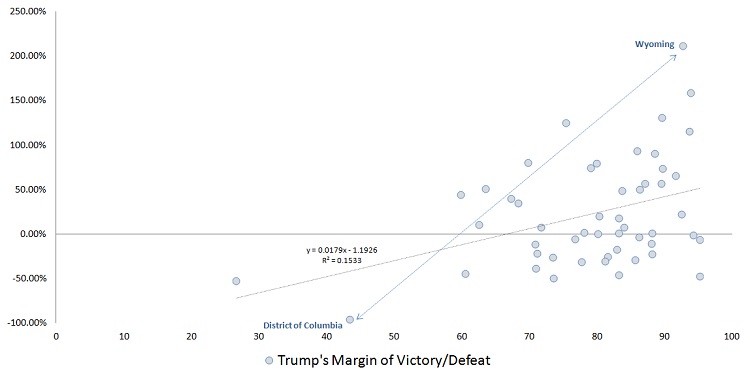 Should white racism be so pronounced as the leftists claim, then racial politics will be the anchor of voting behavior. Therefore, we should see a linear relationship in our scatter-plot chart. The whiter a state gets, the greater the margin of victory for Donald Trump. The less white a state gets, the greater the margin for Hillary Clinton (and a wider loss for Trump).

That, however, is NOT what we see. On the extreme ends of the spectrum, race relations do impact voting behavior. The District of Columbia and Hawaii — where white demographics are the minority — voted heavily in favor of Hillary Clinton. Wyoming, which has the greatest concentration of whites, voted overwhelmingly for Donald Trump.

But the vast, vast majority of whites did not vote along interests of racial politics. The concentration of the white electorate is completely shifted away from the implied linear trend line between the D.C. and Wyoming results. If race relations dominated the social discourse as the leftists are claiming, the election results would be shifted towards this implied trend line.

Mathematically, the majority of the data do not follow a linear trend. That means you cannot say with a high degree of confidence that white racism impacted the general election. In order to get a clearer picture of voting behavior, one would need to apply calculus. In other words, voting behavior is a non-linear trend.

In human terms, white voting behavior is extremely nuanced. The “whiteness” of a state is no predictor of voting behavior. Logically then, the white racism boogeyman is simply a manufactured story.