Shipping and Supply Chain Crisis Will Not End Anytime Soon 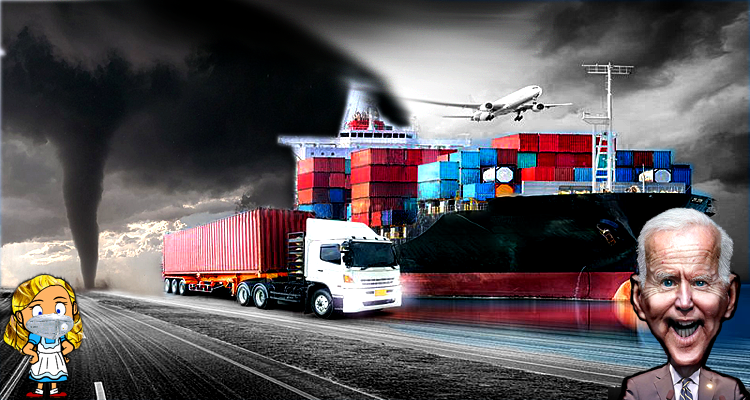 The extensive global network of shipping ports, containers, transnational vessels, rail freight, and trucking that transports the supply chain of commodities and finished products around the world is in a scrambled mess. While bottlenecks remain and the cost of shipping keeps skyrocketing, the chaos spells trouble for everything you shop for, from groceries to big-box retail and gift purchases that will impact the upcoming holiday season. Pay close attention to the video message from Aug. 24 at the end of this article, 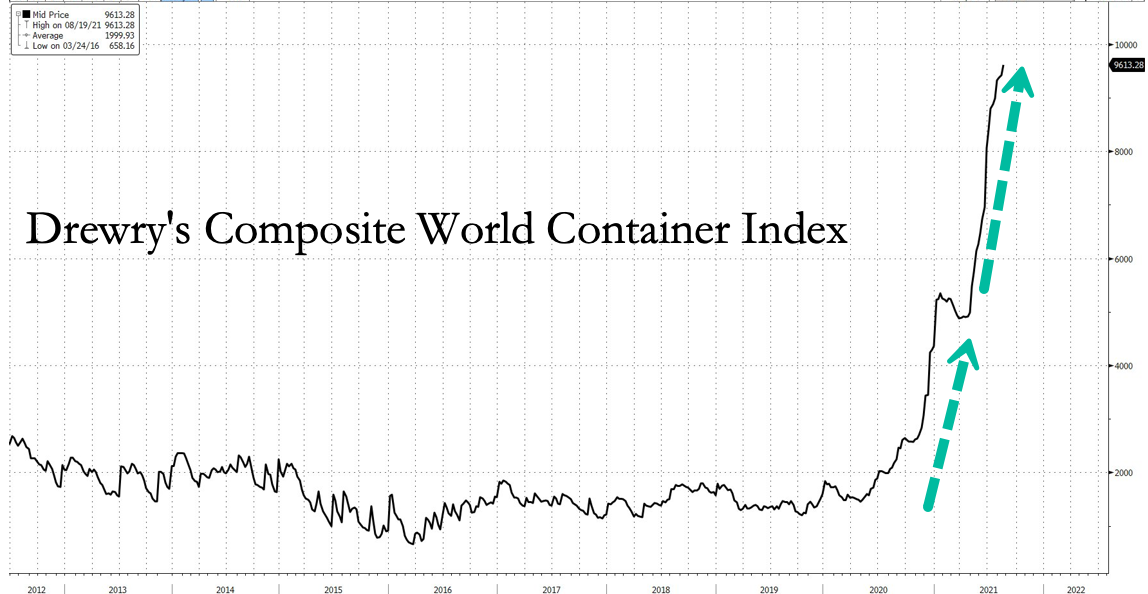 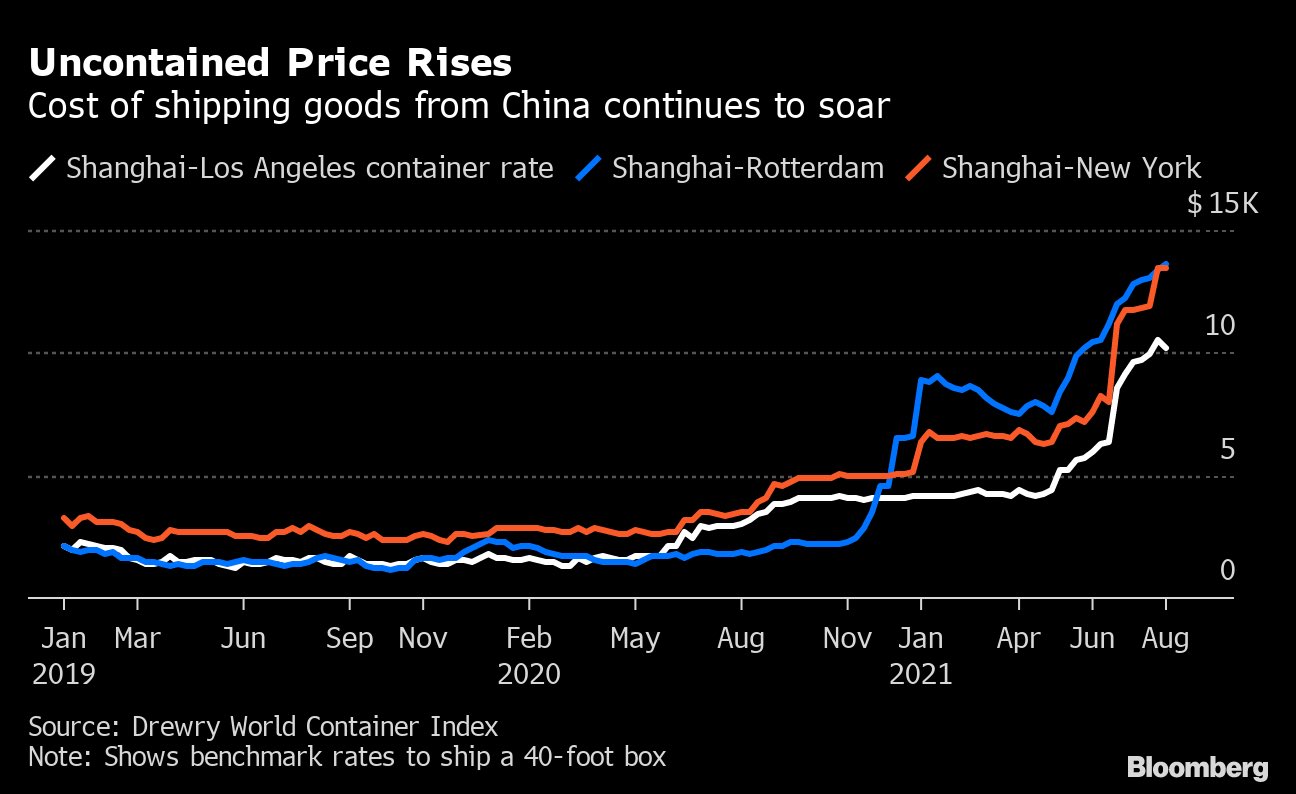 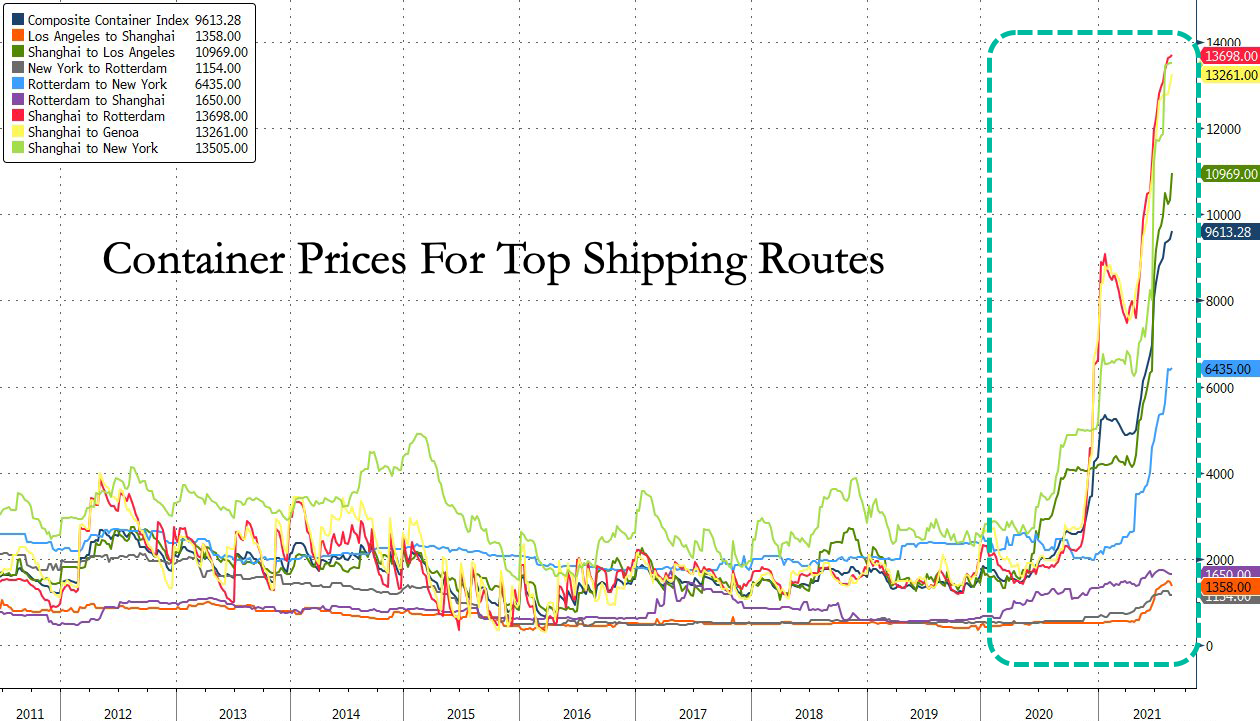 My recent article “A Mileage Tax to Experience the American Dream – Part 2” covered the Vehicle Miles Traveled (VMT) tax pilot program in the U.S. that is buried within an Infrastructure Bill pending on Capitol Hill. Here is an excerpt:

“The elephant on the highway is trucking, which is how everything you place your eyes and hands on and open your wallet to magically appears at your local retail mom and pop store or big-box operation. If you are livid about inflation today, just wait until the shit-show on that distant horizon… Maybe someday soon, the plebes will revolt in mass and remove the socialist squads from Capitol Hill and move them into Guantanamo. Unfortunately, half of us are dumbed down and voluntarily inoculating with gene-modifying jabs without informed consent and vilifying fellow Americans, so I’m not sitting in a cloud of optimist hopium among the zombified… Truckers, on the other hand, might save the potato butts by striking, and maybe not, but at least they’re more likely to prioritize some precious time to listen.”

In the land down under, “truckies” have risen to the occasion and are staging a prolonged protest slated to start this weekend over COVID mandates by blocking highways across the country. That peaceful protest is concurrent with thousands of other truckers and employees from multiple transportation businesses that are about to go on strike because negotiations failed to resolve disputes at the largest road freight company over wage rates, overtime, and contractors in a proposed new enterprise agreement. Here is a short video from the peaceful protest side of the road that plans a blockade of highways and deliveries throughout Australia.

Australian Truckies Warn Citizens to Stock Up on Food

Trucking is a big deal, and ValueWalk pointed that out back in Jan. 2020 when the U.S. was on the cusp of the COVID plandemic.

Trucking Industry: A Canary in the Coal mine?… “71% of all the freight tonnage moved in the U.S. goes on trucks. So, a number of adjacent industries, as well as industries that rely on trucks to move their products, are impacted by the health of the trucking business. In addition, RTS Financial estimates over 7 million jobs are tied to the trucking industry. But, that’s not all. As Misheloff points out, trucking is an indicator of the financial wellbeing of the country’s economy beyond the trucking industry.”

After reading the following article on China today, I could not help but surmise that a partial shutdown of shipping from their ports on targeted products is a plausible scenario that would make life and the economy even more painful in the U.S.

China accuses US of politicizing COVID-19 origins research… “China went on the offensive Wednesday ahead of the release of a U.S. intelligence report on the origins of the coronavirus, bringing out a senior official to accuse the United States of politicizing the issue by seeking to blame China. Fu Cong, a Foreign Ministry director general, said at a briefing for foreign journalists that ‘scapegoating China cannot whitewash the U.S. If they want to baselessly accuse China, they better be prepared to accept the counterattack from China,’ he said.” – Darien Times

In context, China’s counterattack threat did not sound like an outright military response. Although, with China seeing the U.S. as weak due to Biden’s lack of leadership and “Kabuki Theater Revealed With Kabul’s Saigon Weekend” floating in the geopolitical ether, an opportunity to conquer Taiwan is definitely on the table. Imagine the state of global shipping if a war over Taiwan broke out, as the Strait of Malacca, the Taiwan Strait, and the South & East China Sea would be blockaded due to military operations. Have a look at “Dancing With a Taiwanese Time Bomb and Black Gold” along with its Twitter thread then get back to me. It’s not just China to consider since U.S. allies are turning to Russia for help because Biden and his administration have proven to be incompetent on multiple fronts.

Saudi deputy minister of defense signs military cooperation agreement between the kingdom and Russia… “Saudi deputy minister of defense Khalid bin Salman said on Twitter on Tuesday that the kingdom and Russia signed an agreement aimed at developing areas of joint military cooperation between the two countries.” – Reuters

While bottlenecks continue to make headlines across global and domestic supply chains, inflationary pressures will prevail until deflationary forces take their rightful place in the U.S. business cycle circlejerk. For an overview of why a majority of inflation metrics are actually transitory and a detailed presentation by Lacy Hunt, it is worth your precious time to peruse “The Inflation, Deflation, and Disinflation Rabbit Hole” published on Apr. 30, 2021, along with its ongoing Twitter thread.

A few mainstream companies have made news in the U.S. lately regarding a shortage of various products. McDonald’s is running out of milkshakes and halted sales in the U.K., KFC is running out of chicken that will probably save more lives than all the unvaccinated combined, paper bags for takeout orders have fallen into the supply chain rabbit hole, shoe stores are short on footwear inventory, Taco Bell and Starbucks have warned customers that some items may not be available, and Walmart, Target, and Home Depot are having supply chain meltdowns of their own. That is the short list. Also, take note that diesel fuel rationing is taking place in the western U.S. at various truck stop locations, and severe drought conditions have prompted water rationing, crop failures, and the price of beef is set go even higher.

So, what’s going on? Consider the situation in the U.K. as a mirror of issues found in the U.S.

Why Is the Supply Chain Still So Snarled? We Explain, With a Hot Tub… “Supply-chain delays cascade through manufacturing. For just one type of hot tub, 1,850 parts come from seven countries and 14 states and travel a cumulative 887,776 miles.” – WSJ

Supply chain issues impacting farm to fork and could roll over into next year with Christmas at risk… “Labor and driver shortages are cutting across every part of the supply chain in sectors from hospitality to construction. A shortage of workers in key industries such as food production and transport has been compounded by the post-pandemic reopening of the hospitality sector which has created more openings.” – Institute of Export

From a U.S. point of view, many ports in the shipping industry are backed up or nearing a crisis point and backlogs lead to a deterioration of overall performance across the world. Legacy systems and procedures did not respond well to the pandemic and time must pass for balance to return, but the current environment is filled with carnage due to the whims of a pandemic and how sovereign nations respond to the fallout. A good example of the shipping crisis is rolling backlogs in the busy ports of Los Angeles and Long Beach, and small backlogs are beginning to show up on the east coast. 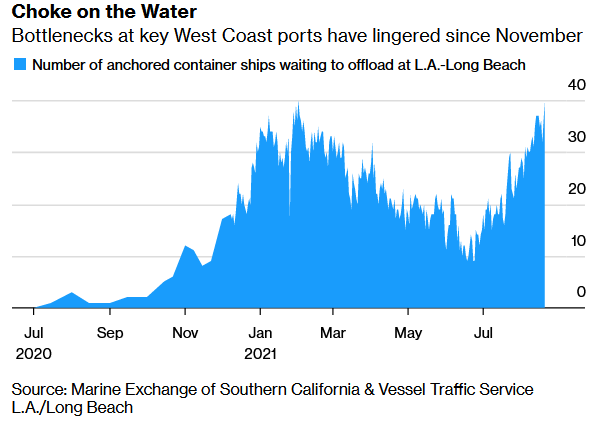 At Port of Los Angeles, More Boxes Leave Empty Than Loaded… “Exports from the top ten US container ports slumped by 8.3% in July, compared with the same month of 2020, to 763,619 teu, while imports gained 14.3% to 2,096,076 teu… According to Blue Alpha Capital founder John McCown, the impact of tariffs on exports has combined with equipment shortages and action by carriers to hobble the nation’s export market. ‘While the impact of tariffs looks to have dissipated for container imports, volume data strongly indicates they are having a more adverse effect on exports’ … According to Gene Seroka, executive director of Port of Los Angeles, July’s exports was the lowest since February 2005. And he said exports had declined in 29 of the past 33 months at LA, and that empty container exports were now running at more than three to one to loaded boxes. ‘Our largest export commodity continues to be air as we reposition empty containers back to Asia,’ said Mr Seroka… But despite the new facility at Long Beach, July throughput figures provide further evidence of the acceleration of modal shift from the highly congested US west coast ports to the east. Indeed, July’s single-digit 3.9% import growth for the west coast was dwarfed by the 27.7% surge for boxes arriving at US east and Gulf coast ports.” – ODOMANKOMA

Ports face biggest crisis since start of container shipping… “Ports have always faced delays due to waves, fog and storms, but the pandemic has caused the greatest disruption since the start of container shipping 65 years ago… According to real-time data from logistics company Kuehne + Nagel, there are currently 353+ container ships stacked outside ports around the world, more than doubling earlier this year. In some cases, such as the Ports of Los Angeles and Long Beach in the United States… it can take up to 12 days for vessels to anchor, unload containers and distribute them for factories, warehouses, shops and homes throughout the United States. When the pandemic-led boom in online shopping increased demand for overnight deliveries, logjam caused inventory shortages and delivery delays, raising prices and frustrating consumers. Covid-19 border restrictions, distance requirements, and factory closures all disrupted traditional supply chains and boosted fares on major transportation routes between China, the United States, and Europe.” – California News Time

The world’s third busiest container port is back but the shipping crisis isn’t over yet… “‘The pressures on global supply chains have not eased, and we do not expect them to any time soon,’ said Bob Biesterfeld, the CEO of C.H. Robinson, one of the world’s largest logistics firms. The latest obstacle is in China, where a terminal at the Ningbo-Zhoushan Port south of Shanghai has been shut since August 11 after a dock worker tested positive for Covid-19. Major international shipping lines, including Maersk, Hapag-Lloyd and CMA CGM have adjusted schedules to avoid the port and are warning customers of delays. The partial closure of the world’s third busiest container port is disrupting other ports in China, stretching supply chains that were already suffering from recent problems at Yantian port, ongoing container shortages, coronavirus-related factory shutdowns in Vietnam and the lingering effects of the Suez Canal blockage in March. Shipping companies expect the global crunch to continue.” – CNN Beijing

Everyone should be prepared for new and prolonged supply disruptions on multiple fronts, including a pandemic pseudo-lockdown across the U.S. Get your financial house in order and stock up on non-perishables for the fall and winter asap.

I leave you this morning with a few words of wisdom from Michael Yon (Aug. 24), a seasoned combat journalist. Pay particular attention to his final comments in the last ten seconds.