There are two commonly accepted facts about life: death and taxes. But in modern American society, we may rightfully add a third, which is ever-rising healthcare costs. Despite allegedly massive improvements in health awareness, and untold innovations in pharmaceutical technologies, we only seem to be getting sicker. Worse yet, that sickness costs us a great deal.

In 2016, Americans spent approximately $3.3 trillion in healthcare costs. Per patient, this astronomical figure amounts to more than $10,000. Immediately, the conspiratorially-minded individual will point the finger at Big Pharma. Indeed, every person that walks into a hospital or treatment center is a giant cash register, funneling wealth into a pharmaceutical industry that has grown fat off others’ misery.

The worst part about this equation is that even if you don’t require the services of Big Pharma, you’re still paying dearly. When we think of healthcare costs, we associate the term with actual treatment. But in the U.S., a small family can be expected to pay $1,000 a month merely for health insurance.

At the end of the year, this amounts to $12,000, significantly higher than the average per-patient allocation of healthcare costs.

When will the madness end? Turns out, there is a very simple solution: stop eating processed foods! What I’m saying isn’t anything unique or groundbreaking. Several health experts have advocated not eating processed foods, for various, typically scientific reasons. But the most convincing factor is that increased junk-food consumption is directly correlated with rising healthcare costs.

According to data pulled up from the Bureau of Labor Statistics, I juxtaposed the producer price index (PPI) of processed-food products and U.S. health expenditures as a percentage of GDP going back to 1960. I initially undertook this statistical experiment expecting to find at least some meaningful correlation. What I discovered, though, was simply shocking. 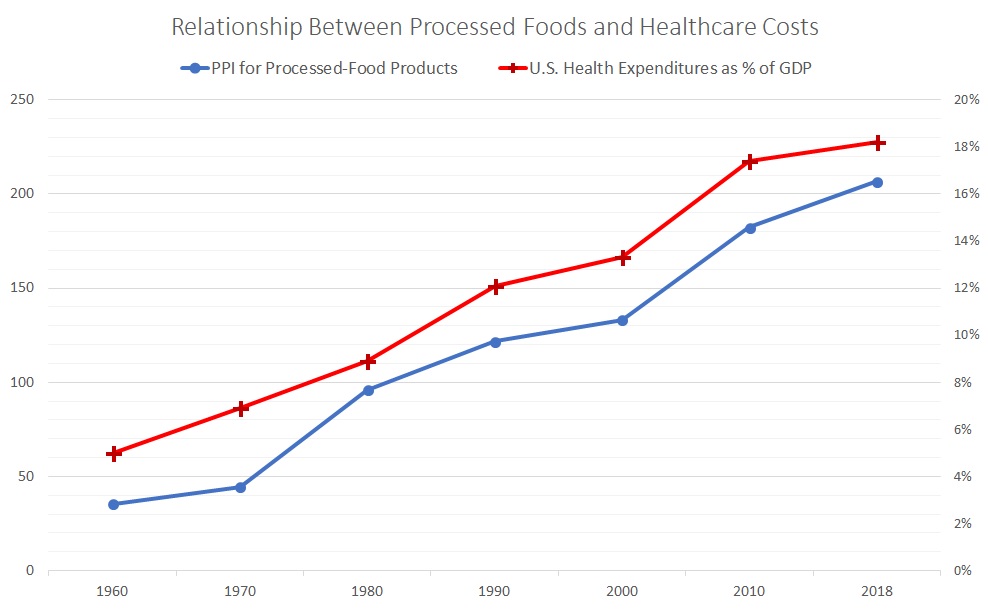 In 1960, Americans spent only 5% of GDP on healthcare costs. Ten years later, that allocation increased substantially to 6.9%. And by 1990, the figure leapt into double-digits at 12.1%.

Clearly, a correlation exists. But the strength of it, a whopping 99%, revealed the undeniable truth: processed-food production and Big Pharma are inextricably linked.

In looking at the evidence, the real enemy towards declining health isn’t cigarette smoking, or other high-risk behaviors, nor is it conspiratorial fare like vaccinations. While I certainly don’t recommend these things, we have a far more fundamental explanation for rising healthcare costs.

It’s what you eat. Stop consuming junk, and you’ll have a much higher probability for a longer, healthier life.