To say that it’s been a rough day for silver is a gross understatement. Out of nowhere, silver tanked nearly 3.5% under extremely heavy volume — the biggest selloff volume of the year. On the other side of the precious metal markets, gold fell a little more than 1%.

However, the bearish spiral of silver prices has gotten completely out of hand. Due to an ugly week of trading, silver bullion is now underwater for the year, by a margin of more than 3%. Indeed, silver prices have trending inside an ugly bearish channel since early March. Subsequent attempts to pull out of it has met with frustratingly abject failure.

Yet those that are holding on to the precious metals long-term are not completely dismayed by the markets. In a recent article for Crush The Street, I reported that Bloomberg acknowledged the possibility of gold manipulation. Gold prices have fallen prey to large and suspicious selloffs, starting from late June.

It thus wouldn’t be surprising at all to find that silver prices are also manipulated. I would argue that silver bullion is more susceptible to such actions based on its thinner market relative to gold, and “management” by a select few elite institutions.

But one of the shocking — and hardly ever disclosed — data points is that silver volatility hit multi-year record lows. Such dynamics contradict the relative quiet that we have seen in both gold and silver markets. In fact, Bloomberg expressed surprise that the yellow metal hasn’t jumped higher due to its safe-haven asset category, hence the accusation of gold manipulation. 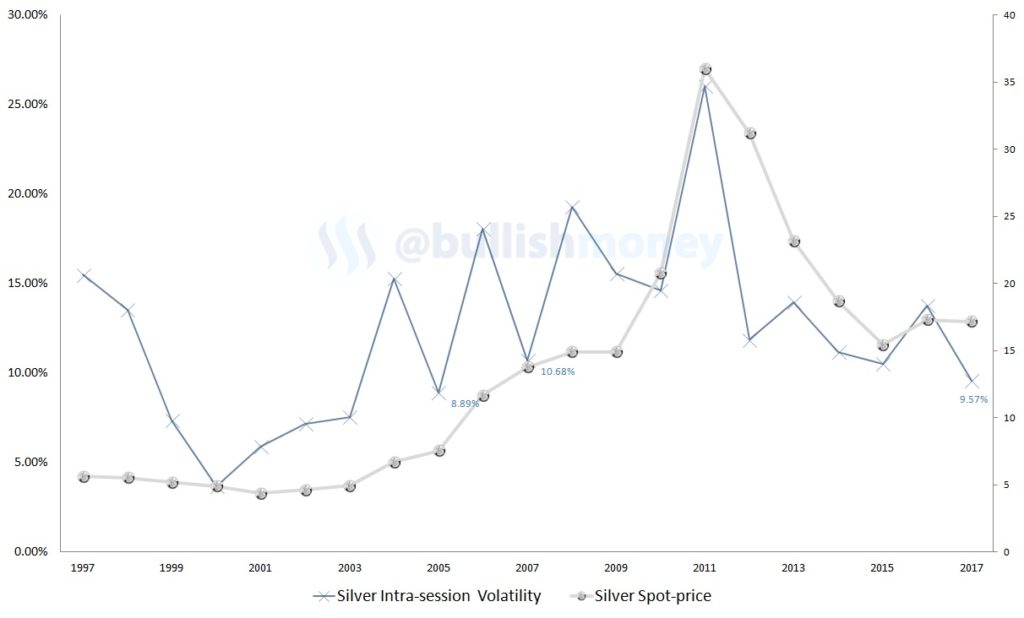 Silver as well should be moving higher. Geopolitically, the U.S.-Russia relationship is strained at best, leading to potential conflicts in Syria, the Middle East, and North Korea. The latter has amped up not only ferocious rhetoric but has blatantly launched ICBMs in violation of international mandates. President Trump is not someone who takes things lightly, and many fear an explosion of tensions in the region.

Instead, we’re witnessing what technically appears to be the resumption of a bearish cycle. The problem here is that we’ve already seen a substantial collapse in silver prices. Another such corrective period could see bullion prices at mind-numbingly low levels.

However, silver investors should be aware that hope is not lost. Low silver volatility typically signals an upcoming bullish move in the metal. It’s higher-than-average volatility that investors should watch out for — high-volatility metrics represent a possible sign that markets are overheated, as the parabolic move in 2011 demonstrates.

While the precious metal markets are no doubt a risky venture, the present bearishness runs counter to both fundamental and technical trends. Shrewd speculators may interpret this trend as an idea to go contrarian.