Big Tobacco could be in a world of hurt, and it’s not just from the usual negative ad campaigns. While anti-smoking advocacy groups have impacted the non-smoking public’s sentiment against cigarette producers, the broader statistics on smoking trends weaves a worrying tale for the industry – cigarettes no longer carry social cache.

Of course, Big Tobacco firms have adapted to the changing times, engaging in fiscal efficiencies as well as new “smokeless” products designed to comply with ever-tightening nicotine restrictions. Yet despite these efforts, the negative impact to the industry overall is palpable. If trends don’t change or if Big Tobacco doesn’t find a profitable solution, we could see a dramatic shift in the markets.

For instance, consider these smoking stats: since at least the year 2000, U.S. tobacco production value has largely declined from $2.5 billion to less than $1.3 billion in 2016. Just as concerning is that production values have steadily declined, and while gains have been made, such rallies have failed to push production values to $2.0 billion. 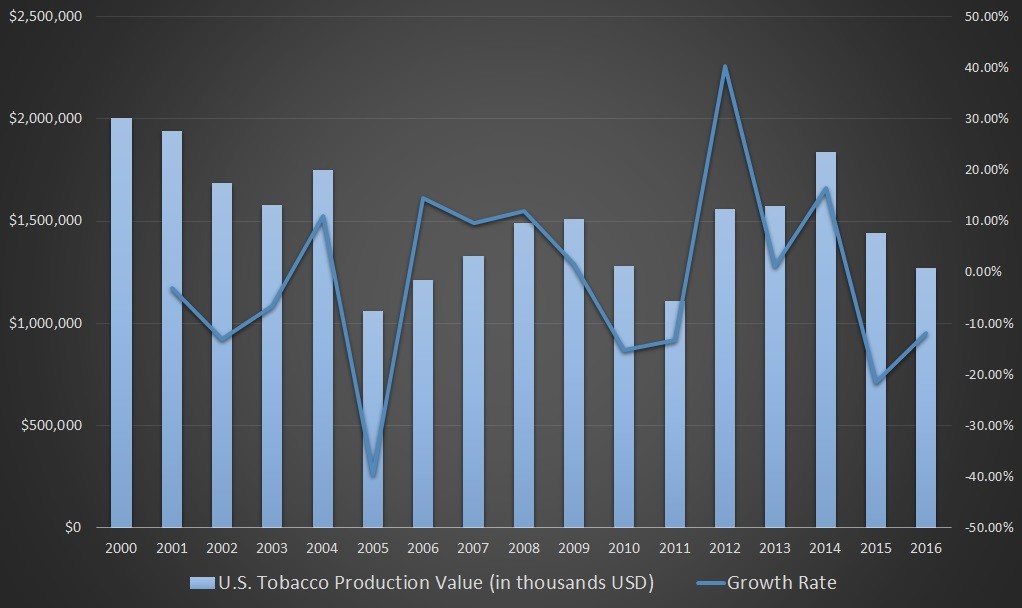 What’s perhaps most alarming in these smoking stats is that the decline in the production value growth rate has aggressively intensified in the current decade. For instance, throughout the entire 2000s decade, Big Tobacco incurred four years of growth rate declines. In this decade, we’ve already tied the record, and we’re left with two more years to spare!

Another set of smoking stats that stress Big Tobacco executives behind the scenes is the usage rate of underaged teens. In 1996, nearly 58% of student populations combining 8th, 10th, and 12th graders admitted to smoking at least once in their lifetime. Had smoking rates gone any higher, the figure would have likely hit two-thirds of teens, which then would have created more lifetime smokers. 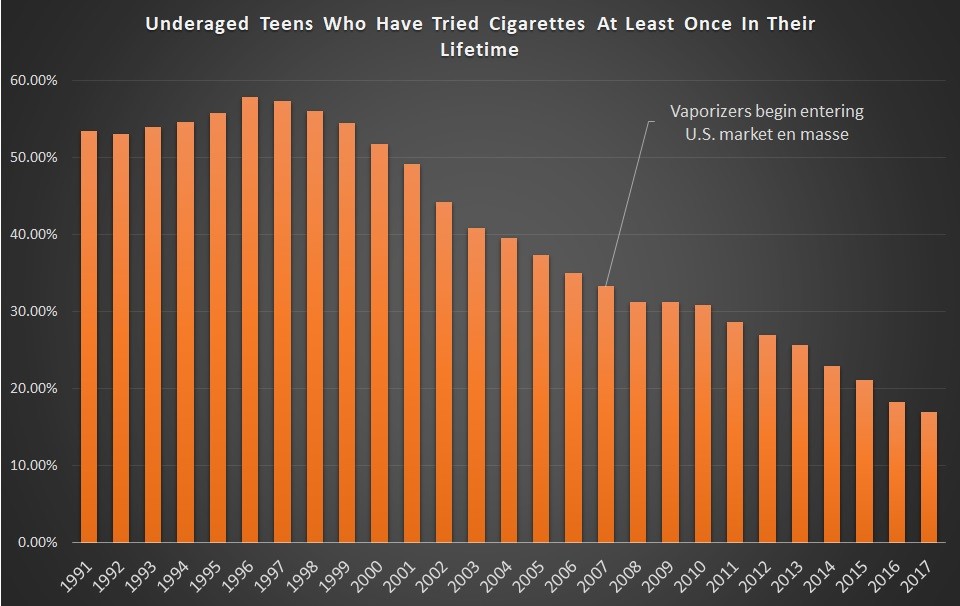 As it stands, tobacco usage dramatically declined since 2000. Last year, the rate fell to 17%, an all-time low. Given the mass societal transition away from cigarettes, Big Tobacco is unlikely to catalyze significant positive growth in this area.

Worse yet, the revolution in e-cigarettes, or e-cigs for short, have leveled a heavy toll in youth smoking stats. Ecigs were first introduced into the U.S. market around late 2006 to 2007. This new digital platform immediately found favor among traditional smokers, sparking an entirely new industry and consumer demographic.

Most significantly, underage youth who do smoke ecigs overwhelmingly do so with flavors that contain no nicotine. That leaves Big Tobacco conglomerates at a further disadvantage since the new wave of “enthusiasts” prefer young brands, not old-guard ones.

The counterpoint of course is that Big Tobacco levers extraordinary resources. However, don’t be surprised that over the next several years, the impact on the war against tobacco will finally start to hurt the conglomerates’ wallet.