The utter lack of imagination and the contribution of exactly nothing substantive was played out in all its gory details for the company’s first publicly-disclosed earnings report. Earnings per share fell to a net loss of 20 cents, well behind the expected forecast of 16 cents. Top-line sales were also disappointing, registering $149.6 million against a consensus of $159 million.

It’s never good to miss so badly on your first report as a publicly-traded entity. Wall Street was likely to give Snap Inc. some leeway, considering that it’s a social media company geared towards a demographic that’s not known for their financial wherewithal. But to deserve this margin, Snap had to pull together strong daily active user (DAU) figures. Needless to say, it did not.

During the first quarter, Snap added eight million new users to the Snapchat app, moving the DAU figure to 166 million, or a 36% increase. That sounds wonderful in isolation. But against the year-ago level, Snap grew its DAUs by 52%. As Business Insider notes, “Snapchat’s user growth slowed to its lowest pace in years.” 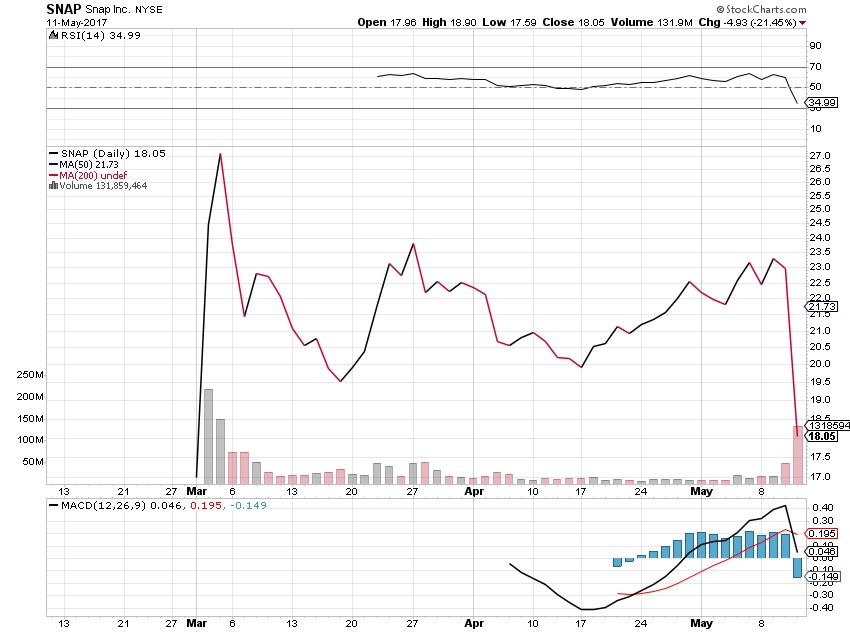 That’s not what Wall Street was expecting and SNAP stock paid a dear, dear price. Once the bad news was revealed, shares plummeted to nearly 21.5%.

Much of this pain was foreseen long ago. For instance, Twitter Inc (NYSE:TWTR) has been a perennial disappointment since its initial public offering. While user engagement is relatively high, Twitter just doesn’t inspire confidence in the markets. Snapchat, with a decidedly more immature demographic, lacks the upside potential of Twitter, which doesn’t have much to begin with.

But the downfall of SNAP stock is more than just a bad business decision. It really exposes most mainstream social media networks as paper tigers. They may leverage considerable popularity; however, when you break down the true value of these companies, an alarming gap is exposed.

Snapchat cannot convert the bulk of their DAUs into sales. Millennials love to receive stuff for free because they feel entitled to them. You can multiply that sentiment twice over for the next youngsters, or Gen Z.

In a way, Snapchat is stuck in quicksand. This is essentially because mainstream social media is in the same dilemma. With the advent of Facebook — and MySpace before that — nothing new, nothing innovative has sprung forth (exceptions exist, which I will discuss in a later post).

Until it does, I would take any financial advice towards a mainstream social media company with a large grain of salt.