As stated numerous times before, the global debt-to-GDP ratio is more than 300%. The Keynesian experiment to create inflation is failing if you look at official CPI numbers. In the real economy and using pre-1990 government methodologies, this inflation is near 10%. Granted, some technologies (such as cell phones and computers) have decreased in price, the average is much higher. Not only does this debt burden hinder economic output and small business, it also hinders multinational corporations. Many Americans believe that their state pensions will be there for them when they retire. Naivety is a strong illness, one of confusion, delusion, and outright ignorance. Based on current projections, one state in the entire union has a fully-funded pension. Public pensions have a $5-8 trillion deficit. Illinois is not the state in which I would want a pension.

State-owned pensions are not the only pensions that have serious liquidity issues. Some of the biggest companies in the world are underfunded, and some of the names on the list are very surprising. A global debt-to-GDP ratio of over 300% leaves no one untouched. According to Bloomberg, at the end of 2016, 90% of the top 200 corporate pensions in the S&P 500 were unfunded by up to $382 billion. 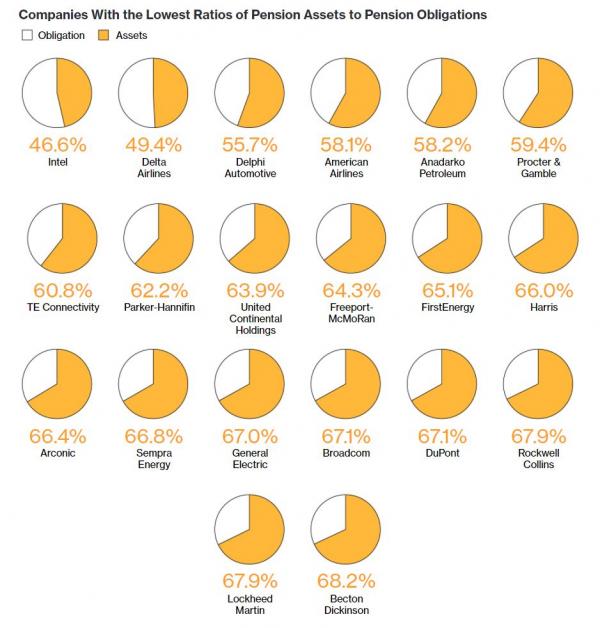 As you can see by this graphic, Intel has the most underfunded pension plan in the S&P. At the end of 2016, the funding ratio was only 46.59%, versus 52.33% at the end of 2015. The shortfall is $1.94 billion, and this number will increase in scale as the debt burden increases. One surprising name on the list is Lockheed Martin, the number one defense contractor. Lockheed Martin’s pension funding ratio is 67.91%, and the shortfall is around $14 billion. If the number one defense contractor is underfunded by $14 billion during a supposed boom period, what happens when the next crisis comes? If these funds become so underfunded, how will they be fixed? Several pension funds know that they are in trouble and will be handed over to the Pension Benefit Guaranty Corporation, which is bankrupt itself. Once these funds are moved over to the Pension Corporation, the funds will be cut in half and retirees will surely be the ones that will be hit hard.

In the defense industry, hiring peaked several decades ago, and not until recently has it begun to pick back up. The reason for this is that many high-level managers are part of the baby boomers and are retiring. As the demographics continue to shift and place deflationary pressure on the defense industry and the overall economy, pensions will be hit hard. These shifting pressures may be offset by new hires at lower wages for a time, but eventually, like Social Security, the number of workers supporting each retiree will not be sustainable. A certain devaluation of fiat currencies will make these pensions worth nothing. As a 29-year-old, my generation was not entitled to a pension, but a FDIC insured 401(k). I suspect at the time I reach retirement age, the 401(k) system will be like the Social Security system.