Did SPY ETF Expose Insider Information in the Market Crash?

Investing market events over the past few weeks have been quite a startling affair. From a bull market that wouldn’t quit to an outright market crash, the entire paradigm shifted almost immediately. But did the establishment benefit from insider information just prior to the Dow Jones collapse? The SPY ETF provides shocking clues.

As you may know, the SPY ETF is the tradable fund that tracks the performance of the benchmark S&P 500 index. While the major indices receive all the media attention, the real money is made in the SPY ETF. Thus, if insider information was actively utilized just prior to the market crash, the trading dynamics would likely be apparent in the fund’s volume levels. 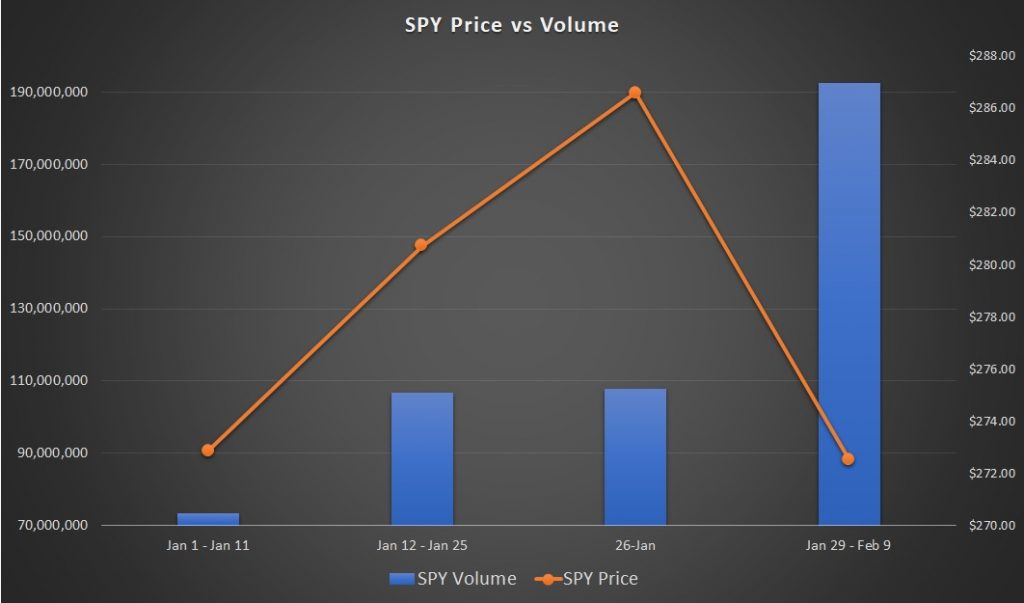 Unusual activity is exactly what we saw in the SPY ETF in the weeks prior to the market crash. From January 1st to the 11th, the SPY volume averaged 73.4 million shares. Suddenly, between January 12th to the 25th, the average volume jumped to 106.7 million, or a 45.4% increase.

On January 26th, the day that the SPY ETF hit its highest price point so far this year, volume was 107.7 million shares.

From there, everything started to unravel. Between the 26th to February 9th, the average price of the SPY ETF dropped nearly 5%. Moreover, volume skyrocketed, led of course by selling pressure. Comparing the period between January 26th and February 9th, to January 12th and January 25th, trading volume increased 80.5%.

Isn’t it convenient that the SPY ETF saw a 45.4% increase in volume days prior to the market crash? And for those that claim such a magnitude is normal, consider that when the actual panic occurred, trading volume doubled – a significant magnitude, to be sure, but well within reason. Therefore, a 45.4% magnitude is contextually surprising because it occurred in the absence of bearish news!

Another eye-brow raising event is the concurrent correction in the cryptocurrency markets. In fact, cryptos have been falling consistently since late December, taking the bitcoin price far below the five-digit threshold.

Did the establishment have insider information prior to the stock market crash, and transfer their wealth to cryptocurrencies?

It’s truly a conspiratorial position, yet it’s not completely unfounded. When given the opportunity, most establishment figures and Wall Street fat cats will take advantage – whether it’s legal or not.

But if indeed insider information was used, investors who suffered during the crypto market crash should take heart: the mainstream just confirmed that the blockchain is the future!