As an established figure on Wall Street – I have over 700 mainstream articles to my name – I’m required to constantly analyze the ebb and flow of the stock market. One of the recurring patterns I noticed was how quickly establishment analysts were quick to call the bull market recovery.

I, on the other hand, have been on record multiple times that it was too early to signal a reversal in recent bearishness. On the week of February 12th, I noticed the shifting tide of analyst sentiment, from morose back to unabashed enthusiasm. What they failed to recognize was that consecutive bullish sessions didn’t really mean anything if they didn’t result in actual gains.

Consider that the Dow Jones closed at a high this year of 26,616.71. Prior to the present correction which started with the February 2nd selloff, the stock market benchmark ended at 26,186.71 on February 1st. Therefore, the 26,000-point level is the minimum target to hit before confirming that a reversal has begun.

You don’t want to call a recovery before that point because the stock market has the proven ability to create head-fakes. 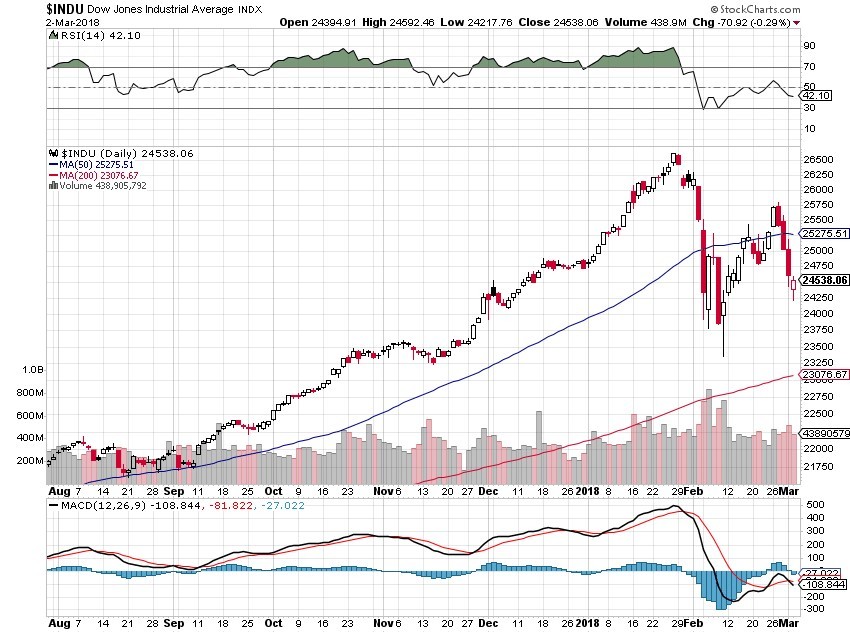 Unfortunately, that’s exactly what’s going on. The Dow Jones closed at 25,709 points on February 26th, a few hundred points below the critical 26,000-point threshold. So far, that’s been all she wrote. Since February 26th, the stock market index is down 4.5%. Obviously, mainstream investors are finding it extremely difficult to get past established resistance areas. Should they continue to fail, we may find even more volatility ahead.

That’s because broader economic concerns are now impacting the stock market. For instance, the U.S. Dollar Index has fallen throughout President Trump’s administration, and it doesn’t look like this situation will improve anytime soon. Year-to-date, the index is down almost 2.2%, which is remarkable considering the prior (relative) stability of the greenback.

A weaker dollar should catalyze higher nominal valuations for assets; for instance, experts predict that this year will be a multi-year record for gasoline prices. That’s understandable given that a weaker dollar is inflationary (more dollars chasing after fewer goods). But that should also be the case for the stock market, which it isn’t.

The imploding dollar further validates that economic concerns, or the fundamentals, are finally starting to ripple down into negative sentiment in the Dow Jones and other indices. To their credit, the mainstream equity markets have floated seemingly on air, but the gravity mistress appears to be calling.