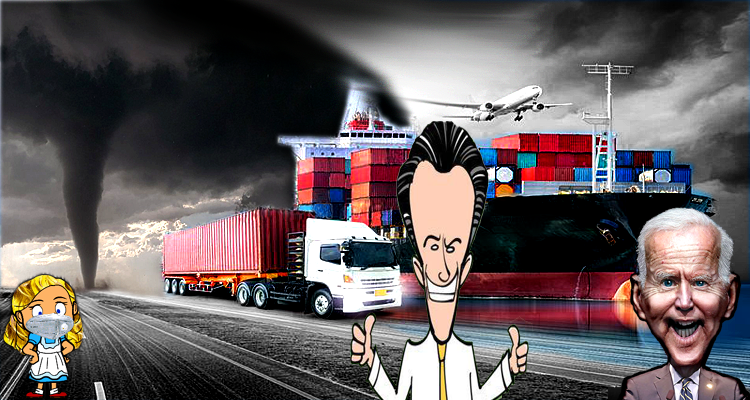 Just as the domestic supply chain crisis in transporting goods across the United States was loosening up a tiny bit, another problem within the trucking, freight, and shipping industry popped up on the West Coast that’s spreading to East Coast ports. The conflagration of bad news in geopolitics, the U.S. economy, and international supply chains are not subsiding.

The U.S. has been through a lot since shipping ports were jammed after the pandemic’s initial global shutdown. We’re now at the doorstep of a potential hard-landing recession with a clueless clan in the White House, ongoing deficiencies continue in microchip and semiconductor supplies for everything electronic, high inflation across the board is not abating, fertilizer shortages threaten famine around the world, a NATO proxy war in Ukraine and sanctions imposed upon Russia are backfiring on Western economies and energy supply, the U.S. bird flu outbreak in poultry has tripled the price of eggs and added supply constraints, diesel fuel shortages will soon include diesel engine oil and DEF scarcity, reductions in railway capacity and cargo is growing while facing a possible railroad union strike, new shipping delays due to China’s spring lockdown of its major cities and shipping ports is set to unleash a backlog at U.S. ports, and we have farmers across the world protesting and/or shutting down supply chains and transportation due to ridiculous edicts imposed by government greenies.

Articles that cover the topics noted above will be listed at the end of today’s missive. The following picture of an empty egg refrigerator is from a major grocery chain in my neck of the woods in New Hampshire. 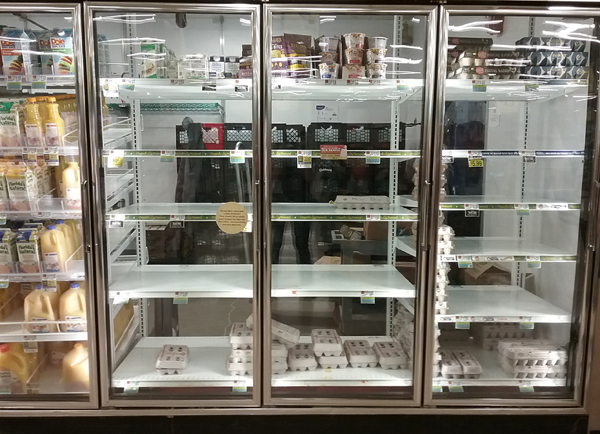 Protests by truckers were launched in California last Monday following the Supreme Court’s refusal to review a case brought by the California Trucking Association. The issue surrounds implementation of the AB5 gig-worker law passed in 2019 that “redefines the definition of employee,” and requires a three-part test for a broad range of workers to determine if they retain independent contractor status. If entrepreneurs fail the government screening process they’ll be categorized as employees entitled to job benefits, and companies that employ them must honor the regulations and liabilities that govern employers such as workers compensation, overtime, and sick pay. There are roughly 70,000 big-rig truckers in California that are owner-operators and required to comply with the AB5 screening process. They’re not thrilled about big brother prying into their privacy to dictate the terms of life, liberty, and pursuit of happiness.

The strike may not be resolved in the near-term because truckers stated that this work stoppage is indefinite until an exclusionary amendment is incorporated into AB5. There’s been no indication of when California will begin enforcing AB5 and it’s still being contested in the lower courts. Governor Newsom’s Office of Business and Economic Development stated this week that “it’s time to move forward, comply with the law, and work together to create a fairer and more sustainable industry for all.”

Dockworkers associated with the International Longshore and Warehouse Union (ILWU) are honoring their principles by respecting trucker picket lines and not entering terminals for work. The ILWU is currently involved in contract negotiations for 22k members across 29 West Coast ports with the Pacific Maritime Association that represents over 70 employers. The most recent agreement for a contract expired a month ago. Meanwhile, trucker picket lines are worsening issues that already exist due to delayed pandemic cargos at major ports that left a stockpile of goods at terminals. Countless businesses along supply chains that the ports feed are concerned about dealing with additional logistics issues. Close to one-third of all containers shipped to the U.S. enter through Los Angeles and Long Beach ports. Import dwell times for July are rising quickly with shipping containers sitting at docks an average of 17.5 days, up from 12.4 days one week ago based on project44 real-time data.

Keep in mind that a nationwide trucker shortage already exists due to 91k drivers that left the industry since 2020 after the pandemic took hold. As of 2021, a shortage of 80k drivers was an all-time high and the American Trucking Association expects that number to double by 2030. The transportation industry relies heavily on flexible contractors that operate on their own terms and California truckers have fought for an exemption from AB5 for years.

I’ll close up shop tonight with a brief link garden as promised, a CNBC video from yesterday that briefly covers the strike situation on the West Coast, and an article excerpt from CNBC today but the full article includes contagion details not found elsewhere and is worth a read. Buy food and ensure your financial house is in order!

Shippers avoiding Port of Oakland as trucker protests over gig worker law and stop flow of trade… “The amount of container volume waiting to get into the port at anchor has tripled, according to MarineTraffic monitoring of the congestion. That wait has some ocean carriers now pulling up anchor and leaving… The closure has also impacted loaded U.S. exports. The Port of Oakland is a major export port of U.S. agriculture… vessels waiting to unload at the Port of Los Angeles are waiting longer as a result of the growing container congestion. That port is at 90% land capacity with over 60% of its containers destined for rail… The diversion of trade away from the West Coast ports to the East Coast continues and as a result, an increase in the number of vessels at anchor… ‘You have 36 container vessels waiting outside of Savannah carrying a total combined volume of 311,300 TEUs (twenty-foot equivalent unit),’ Charvalias said. ‘That’s over half a month’s volume of what Savanah handles… Rerouting ships just creates a ping-pong congestion effect that further disrupts the already strained landside operations. It may take months to clear the backlog.’” – CNBC, Jul. 22 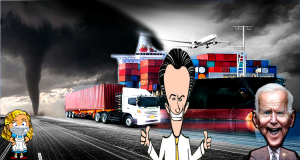