Named after Pallas Athena, the Greek goddess of wisdom, palladium is indeed proving to be a powerful opportunity for the astute investor. Despite rising interest for commodities and hard assets, palladium remains the only member of the precious metals to have a convincing run in the markets.

The obvious catalyst for the commodity’s incredible resilience is its supply-and-demand dynamics. With Russia controlling the vast majority of global inventory, the supply chain for palladium was already inherently restricted. Add in today’s geopolitical tensions, and growing distrust between the U.S. and Russia, and you have a recipe for explosive gains.

Typically, gold prices — and to a large extent, silver prices — also move higher on economic and geopolitical uncertainties. However, we’re not hearing much about palladium competitors because gold and silver have viable alternatives. As a safe haven, foreign currencies and bonds often replace gold. Manufacturers prefer cheaper industrial metals over silver.

In contrast, palladium has no economic alternative. While platinum can mimic its industrial attributes, such a move would be cost prohibitive due to platinum’s higher spot price. Furthermore, palladium — thanks to the auto industry — has a constant stream of demand from the automotive industry as a key component of catalytic converters. 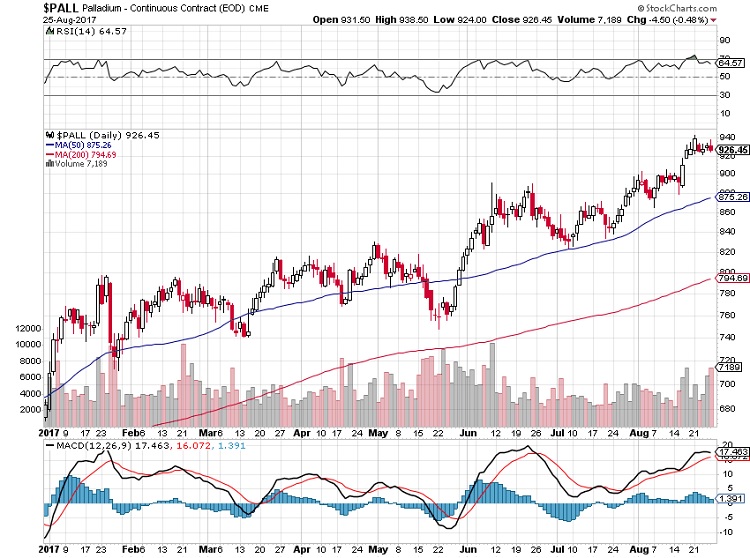 Yet strangely, palladium continues to rise even though auto sales have peaked in the U.S. Additionally, the industry is suffering a subprime loan crisis not dissimilar structurally to the mortgage crisis of the mid-2000s. We also shouldn’t forget the fundamental detail that fossil-fuel technology is on the way out, and clean, electrical energy is working its way in.

A declining demand base, especially one that’s telegraphed, usually spells the end for commodities and precious metals. But not only is palladium defying the precious metals rout, it’s also defying market logic. In this broader geopolitical environment, gold prices and silver prices should be moving decisively higher. Although their industrial uses have waned, their validity as safe havens have not (despite the existence of competitor safe havens).

Why is palladium so robust while the other precious metals have floundered? I offer two explanations. First, supply is likely much lower than advertised. Russian inventory is a state secret, but the markets absorb all the best information that is available. Palladium prices wouldn’t move higher due to declining demand unless the supply situation was dire.

Second, palladium is a thinner market than gold and silver, and is typically traded and transacted among “real” market participants. With palladium, we’re getting a glimpse of what a precious metals exchange looks like without manipulation.

The latter explanation could actually be the biggest reason why palladium continues to surprise investors.