Target Corp Shows Danger in Taking Too Many Left Turns

As if the giant retailer needed any more problems, Target Corp. CEO Brian Cornell has yet another one on his hands, perhaps the biggest in recent memory. At a recent industry event in Aspen, Colorado, Cornell stated that ” The Hispanic consumer in the U.S. is shopping much less. They are staying home. They are going out less often.”

Often cited as the major demographic that will take over America, Hispanics are regarded as the bread and butter of retail, and Target is no different. Retailers go well out of their way to cater to Hispanics, whether that involves inventory procurement or bilingual signage. Some companies are even lax on their documentation requirement, eschewing obedience to immigration law for cheaper labor.

But for all the extensive work that Target has performed for Hispanics, TGT stock remains one of the worst in the markets — even against other retailers. For instance, TGT is down nearly 26% year-to-date, whereas chief rival Wal-Mart Stores is up over 10%.

Herein lies the disconnect between Target Corp’s excuses and reality. Cornell can claim that Hispanics are staying home all he wants. He can blame President Trump and his crackdown on illegal immigration, even cite some Washington “think tank” to assuage his bias. None of that gets down to the heart of the matter.

Since Target announced that it will take a firm stand on gender identity issues, and thereby, open its restrooms to anyone, irrespective of gender, that created a firestorm from which they, and TGT stock, never recovered. Since announcing the awful corporate policy, TGT is down more than 33% in the markets. Furthermore, it has never reached its announcement-day highs. 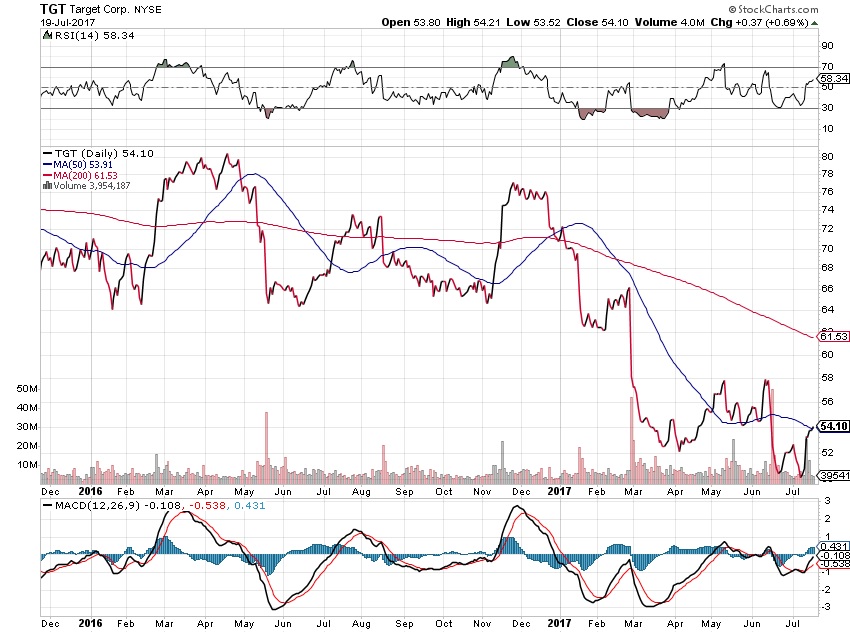 This, more than any other event, is the reason why Target is knee-deep inside its own troubles. Irrespective of its marketing data and political undercurrents, the reality is that a vast majority of Americans still care about core, ethical values. No matter how much TGT tries to push the transgender agenda, they will find resistance throughout the political and cultural spectrum.

But this is all the more true for Hispanics. Most Latin American families are deeply traditional, holding to Roman Catholic values. Additionally, Hispanics have a “machismo” culture and identity. To be considered “less than a man” is devastating to a typical Hispanic male. To insinuate that he is anything other than a healthy heterosexual amounts to fighting words.

But because Target is so engrained in political correctness, they can’t tell their left from their right. Even though Hispanics largely vote Democrat, they absolutely do not support the broadening agenda of the left, which includes homosexuality, transgenderism, and non-Christianity based religions.

In this manner, Target took too many left turns. In attempting to please its allegedly liberal base, they patently offended its key demographic. This finally forces Target to decide which leftist policy is more important than the others.