Filing your taxes for 2018 is still a few months down the road, but it would be prudent to stay up to speed on any impact The Tax Cuts and Jobs Act of 2017 (TCJA) and upcoming Tax Reform 2.0 will have on your wallet. For a large portion of taxpaying citizens, the actual returns will now be the size of a postcard instead of a stapled stack of two-sided pages full of questions and answers and mind-numbing calculations. 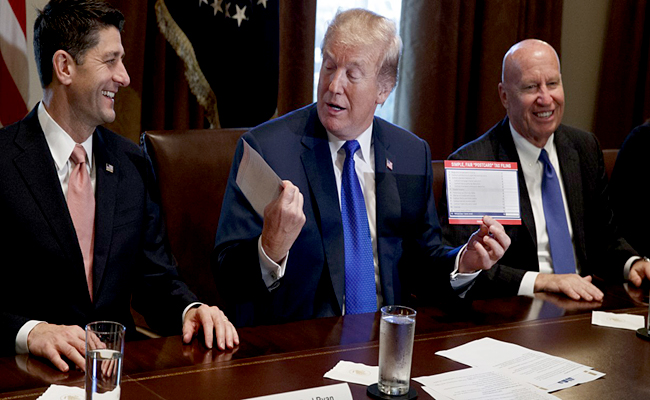 IRS Releases Draft Instructions for Postcard Size 2018 Form 1040… “Starting with the 2019 tax filing season, many taxpayers will be able to file federal income taxes on a new postcard-sized Form 1040. The IRS planned to finalize the new base 2018 Form 1040 this summer, an IRS spokesperson previously told Wolters Kluwer. ‘This early release is part of our standard process to invite stakeholder input into draft forms before finalizing them,’ the IRS spokesperson told Wolters Kluwer after the official release of the draft 2018 Form 1040.” – CCHgroup, Oct. 2

On December 22, 2017, the POTUS signed into law the most sweeping changes to the U.S. tax code since President Reagan’s tax cuts in 1986. There are considerable changes to rates and bases for both individuals and corporations, with corporations having a maximum rate of 21%, a redesign of international tax rules, and a deduction for passthrough income. Other major changes include expensing of equipment investment; the elimination of personal and dependent exemptions, the individual health insurance mandate penalty, and the corporate alternative minimum tax; and increases in the standard deduction, estate tax exemption, and individual alternative minimum tax exemption.

8 Facts About the GOP Tax Cuts That Dems Don’t Want to Talk About – ATR, Apr. 17

A few other noteworthy benefits include a doubling of the child tax credit, up from $1k to $2k, and $1,400 is refundable, whereas it was only a deduction before. The estate and gift tax also doubled, with the baseline exclusion amount going from $5 million to $10 million for descendants dying or for gifts made after Dec. 31, 2017 and before Jan. 1, 2026. There is a new $500 credit if you support a non-child dependent, such as an elderly parent or child over the age of 17. And funds from 529 accounts that could only be used for college tuition in the past can now be used (up to $10k) for enrollment in K-12 public, private, or religious schools.

It is not all good news for everyone, as nobody can make everybody happy all the time. The TCJA eliminates or limits many former tax breaks, and much of the tax relief is temporary unless Tax Reform 2.0 addresses those issues. For individuals, most of the changes that take effect in 2018 will expire after 2025. There will be seven income tax brackets, and the new two-sided Form 1040 will replace the current forms 1040, 1040A, and 1040EZ. A draft of the new booklet and instructions are available from the IRS. 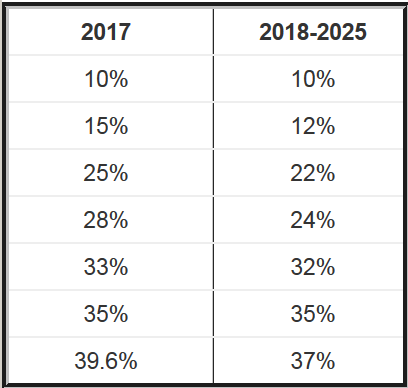 My favorite change in the tax code is the capital gains relief. I sent a note to the POTUS in May of 2017 regarding capital gains taxes.