Dr. Peter Navarro interviewed Dr. Robert Malone today and war-gamed the party line pushed by government officials and mainstream media about the pandemic’s evolution and potential consequences of intervention by jabbing an experimental gene therapy into billions of arms under an Emergency Use Authorization (EUA) and not FDA approved application. Navarro said “the authoritarianism does not match up with the science” and Malone coined recent revelations as “The Great Pivot.” The full interview is posted below along with one damning quote among many.

The most important takeaway, IMHO, was justified concerns about an Antibody-Dependent Enhancement (ADE) spurring vaccine-resistant mutants (i.e., breakthrough cases, immune escape) in the middle of a hot coronavirus outbreak, as you “cannot vaccinate your way out of a pandemic.” Here is a very brief and succinct explanation about ADE a few days ago:

During the winter and spring of 2020, I often quoted virologist Dr. Henry Niman while he educated virus gormandizers that tuned into alternative media radio when COVID was ripping through China and Italy (D614G mutation). One of his concerns was virus recombination because the viral reservoir was growing exponentially as it seeded the entire planet. I reiterated his information in numerous articles and interviews that began with my first pandemic-related piece on Jan. 21, 2020. On Apr. 7, I created a solo Twitter thread about virus recombination and rapid evolution, and the first Twitter post I referenced ADE in was on May 5. The full list of articles and Twitter threads is at the end of this article. 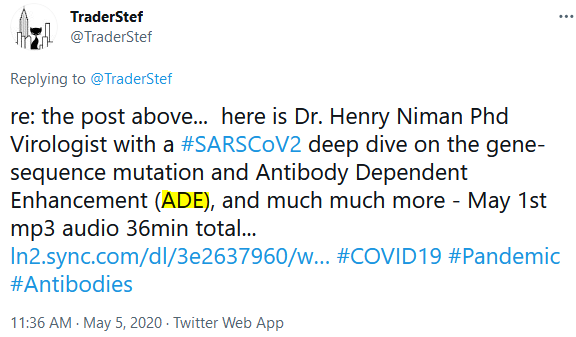 I penned a reminder within an Oct. 23 article that the threat of ADE was not going away and cited a few research publications that were discussing it or picking up potential signals.

“Unfortunately, COVID-19 is a SARS family coronavirus (common cold) that adapts at a higher rate than the flu, antibody testing has shown only months of protection and reinfection confirmations are on the rise, and the potential for Antibody-dependent Enhancement (ADE) is high on the list for virulence and reinfection. ADE allows the virus to use antibodies to enter cells (think that one through here, here, here, and here)” – TraderStef, Oct. 2020

More research came to light during the winter of ’21 and I referenced the following publication on Twitter on Apr. 19:

Evidence for increased breakthrough rates of SARS-CoV-2 variants of concern in BNT162b2 mRNA vaccinated individuals… “From a biological point of view, the breakthrough cases observed in this study might either be due to immune evasion of both strains, or the ability to create higher viral loads.” – medRxiv, Apr. 6

“And the real question is what are the average relative levels of viral titer in unvaccinated vs vaccinated. If NBC news did not mis-speak, then the vaccinated titers are higher. And if this is true, this would pretty much be a smoking gun for ADE.”

On July 29, the CDC and Fauci flip-flopped on policy and said vaccinated Americans must mask up because they are being infected and spreading the virus. After the Washington Post and New York Times published an article about the leaked CDC presentation deck, SHTF with a key point:

“Detailed analysis of the spread of cases showed that people infected with Delta carry enormous amounts of virus in their nose and throat, regardless of vaccination status, according to the C.D.C. document.”

There you have it, folks. We could be on the precipice of a worst-case scenario since government officials, agencies, and the mainstream media have been caught red-handed over censorship and misinformation. All seasoned virologists know that you don’t implement a vaccine in the middle of a hot pandemic, as it puts more pressure on the virus to adapt, improvise, and overcome. In my first informed consent article, I referenced Dr. Vanden Bossche and linked his letter “to all authorities, scientists and experts around the world, to whom this concern, the entire world population” that warned ADE could develop and create a monster mutation if the world continued mass ‘vaccination’ in the heat of the global pandemic. The potential for Nuremberg 2 continues to creep closer to reality in our lifetime.

Excerpts to consider from the CDC slide deck that was leaked on July 29:

Examples of mainstream mixed-message damage control after the slide deck:

Shortly after Malone’s interview with Navarro and inserts by Steve Bannon, Senator Ted Cruz posted that the CDC has destroyed their credibility. 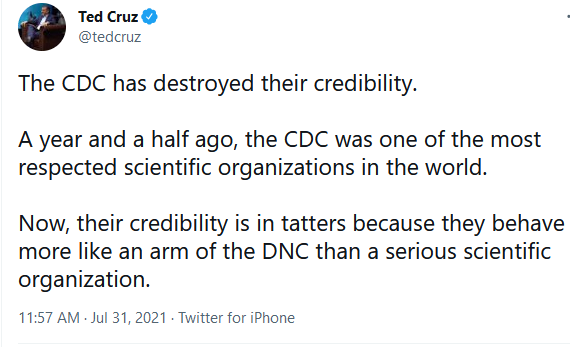 “The Great Pivot: This was rolled out in the Washington Post as they looked at the CDC slide deck and said the CDC is going to have to pivot from its messaging before and do it in public view and its going to be extremely difficult for them to do that in terms of public policy. What it amounts to is we can all see the lies now, they are transparent, there was a leaked slide deck. This is why Erin Burnett just lost her cookies the other day on her show as the press is coming to terms with the fact that they’re lied to repeatedly and they’ve had this party line pushed at them and they bought it hook, line, and sinker. Those that aren’t dependent on Toni Fauci’s money have been speaking out saying no no no, this isn’t right. There’s no surprise here as far as I’m concerned. Now the government that’s been promoting this noble lie strategy where the vaccines are perfect, they have no adverse events, they can get us to herd immunity, all of that has be known to be false. Now they got to confront the fact they’ve been caught in a lie.” – Dr. Robert Malone

As promised, here is the link garden to my articles and Twitter threads focused on the pandemic since Jan. 2020:

A pre-covid experience with microbial resistance accelerated my dad’s decline and death. He passed away with an “unknown” infection three months after I published the following article. He is RIP at Arlington National Cemetary.

My Experience in the Microbial Superbug Epidemic… Antimicrobial resistance personally affected my family beginning in 2014 and will forever haunt my dad, who was stricken with methicillin-resistant Staphylococcus aureus (MRSA), as well as a fungal infection that tagged along for the ride.” – Apr. 2019 / short Twitter thread)

Some folks follow the herd and group-think, while others practice strategic due diligence.

Former President Trump has failed to sound a clot-shot alarm bell on the “Trumpcine,” and he knows it. Sorry to burst any savior bubbles. His doctor Vladmir Zelenko red-pilled Israeli politicians about the mRNA jabs.

Pathologist Dr. Ryan Cole, his visual summary (a Vimeo copy) on what the jab does to the brain & body.