“The Gig is Up” – Free Trade is a Fair Trade, Not a Trade War

It was in towns of the Middle Ages where rudiments of economics surfaced with economic, legal, and social institutions that were essential for the development of widespread and multifaceted markets. Medieval Europe is where the fundamentals of capitalism took hold, creating legal protections, individual rights, ownership of property, and economic order where participants could fulfill their own needs by serving others through production and trade. There is an interdependency that develops with an exchange-based system and the division of labor. The institutions of property and contracts developed slowly, but the initial strides in economy were not “free markets.”

Competition did not exist, and it was dangerous doing business because prices and wages were controlled by the conceptions of equality and justice as understood at the time. Collective ownership and the administration of property within a township were common practice, such as access to the grain mill, the pastures where citizens grazed livestock, the bakeries and ovens, and the marketplaces were all communal enterprises because everyone had to utilize town facilities in order to maintain a convenient and “civilized” structure.

Just as we have unions, guilds, and trade associations in modern times, there were guilds during the Middle Ages. They acted as a mechanism of regulation by deciding who was permitted to trade in town, under what terms, how products or services were produced, and what products were offered in the market. Foreign merchants were only allowed under special permit, were not allowed to undersell resident merchants, and their products could only be of a specific quality and type.

Guilds had a lot of power over a township, and the rules they created were extensive. They managed guidelines for apprenticeships; who and how many folks were allowed to pursue professions on a yearly basis; the methods and types of materials used to produce goods were clearly defined; what hours a business was allowed to remain open; specific products could not be taken down from shelves until a certain time of day; and all pricing was fixed with minimums and maximums. Rule violations were subject to criminal prosecution. The rationale behind the regulations was to maintain fair prices for customers and minimum qualities of goods offered. Guilds thought it was better to control supply, production methods, and prices and wages to assure continuity of the town and its mercantile life.

What the guilds ended up with was a legal vehicle to monopolize trade among all crafts and professions. It also became an impediment to improve the qualities of goods or the variety of commodities offered on the market. The restrictions created a disincentive on the part of artisans and professionals to lower the cost of production and increase profit by offering their goods at reduced and more attractive prices. Any attempt at improvement was considered an unjust and unfair trade practice that harmed the honest man. Free trade was viewed as a destabilizing force that eventually harms producers, as well as consumers.

Then the “Free Fairs” idea came along and changed everything.

A free fair typically required permission by the king, and the authority bestowed upon a local lord or a church luminary the power to act as the sponsor. The first recorded grant was during the 12th century, from William the Conqueror to the bishop of Winchester, to hold an annual free fair at St Giles Hill. Fairs were often held at the crossroads of heavily-traveled trading routes where towns were founded over time that later became famous cities. The hours of operation coincided with religious festivals or other holiday celebrations that attracted large crowds and could last for a few days or weeks. The most successful fairs became an institution throughout Europe and attracted merchants and tradesmen from across the continent. The benefits for merchants and tradesmen who participated in the fair were exemptions from the usual tax, tolls, and trade regulations, but unfortunately, the event sponsor usually took advantage of the opportunity to collect a kickback from foreign merchants. The fairs also served as a social diversion for amusement, with sideshows, animals, magicians, musicians, and freaks, creating a circus-like atmosphere.

The fairs inadvertently served the purpose of introducing free trade. They acted as a means through which all of Europe could have contact with each other and become familiar with the types and qualities of goods from across the continent – and the world. They also introduced the idea of the free flow of goods, commerce, contracts, property rights, and provided the opportunity for mutual benefit and profit without the cost of taxation or severe regulation. Pure capitalism was born. A drawback was kickbacks to the sponsor of an event, reminiscent of how the mob in the modern world sometimes operates to keep a neighborhood or industry in its back pocket. Better yet, kickbacks are comparable to the one-sided modern-day tariff that skims off the top with the World Trade Organization (WTO) turning a blind eye.

Fast-forward to the 21st century and we have a United States administration reintroducing the world to a free fair, which is sunlight to globalist vampires who prefer a kickback. The POTUS was crystal clear about trade to his voting base during the election campaign, and he delivered during his closing comments at the G7 Summit in Canada before departing to meet Rocket Man in Singapore. Here is the full statement and Q&A session with the press. I suggest listening carefully in its entirety, but if you must, fast-forward to timestamp 7:45 through 20:55 and witness the Kool-Aid being taken away.

The POTUS on international trade:

“That’s the way it should be. No tariffs, no barriers, no subsidies – that’s the way we learned it at the Wharton School of Finance, that would be the ultimate thing… We’re like the piggy bank that everybody’s robbing.” 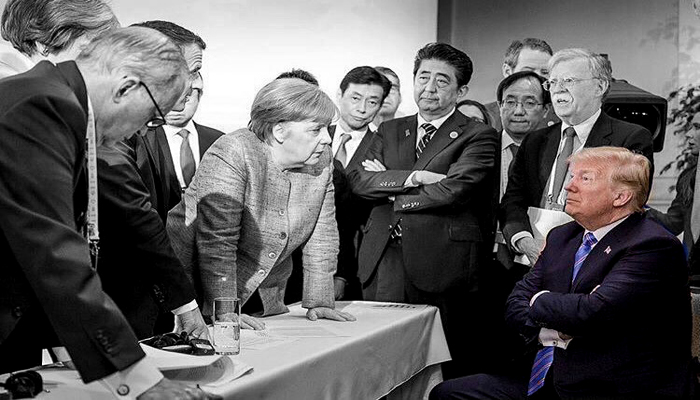 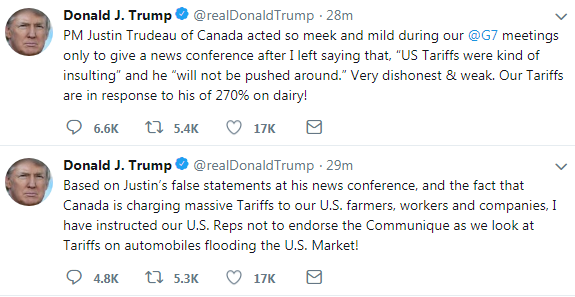 “Don’t blame Trump for trade disputes… tariffs are a tool… blame the countries who have broken away from conditions… … Trump is trying to fix a broken system… the WTO has become completely ineffectual… international, multilateral organizations are not going to determine American policy.”  – You can view the full Jun. 6th White House press conference on trade policy with Larry Kudlow, or just the sweet and short version.

The Economist’s point of view on its June 2018 magazine cover, “Demolition Man…”

Larry Kudlow calls Justin Trudeau’s verbal attacks ‘amateurish,’ a ‘betrayal’… ““He really kind of stabbed us in the back… He did a great disservice to the whole G-7.” – Washington Times, Jun. 10

The Renaissance that swept across Europe found its roots from the freedom of thought and exposure to international trade that was provided at free fairs. In the U.S., we celebrate the Renaissance by attending a Renaissance Faire that can be found in almost every state.