The Great Exodus of “Leftugees” from Blue States to Red

The pioneers that joined wagon trains and headed west were in search of inexpensive land to build their homesteads with the opportunity that liberty and freedom provided. Wagon trains began in the early 1820s by using the Santa Fe Trail from Missouri and emigrant trains to Oregon and California in the 1840s, which peaked during the 1850s following the Gold Rush in California.

A lesser-known fact about the migration west is that thousands made the trip by boat. Ships traveled around the southernmost tip of South America and dropped off their passengers on the west coast, then filled their hulls with guano (bird poop) from islands in the Pacific and sold it as fertilizer on the east coast upon their return.

Following the American Civil War, the transcontinental railroad was completed in 1869 and the migration west took on a completely new dynamic. Many still chose to travel by covered wagons and ships, but the majority took advantage of the comfort, convenience, and safety of the railroad. Railroad companies were awarded large land grants by the government that extended up to 20 miles on both sides of the rail, and they recruited people to head west that would purchase that land for homesteading.

Why Buy Land When It’s Free?… “Through the settlement years, there were four major laws that made land available to settlers — the Preemption Act of 1841, the Homestead Act of 1862, the Timber Culture Act of 1873, and the Kinkaid Act of 1904. Some settlers paid $15 in filing fees for a homestead with free land. Other settlers bought and paid for land from the railroads that were charging around $800 for 160-acre farm. Why did they do that? For one thing, the railroads had more to gain, so they advertised… They wanted paying customers who would ship goods to markets and buy things from those markets. The closer a farmer was to the railroad, the easier it was to ship crops and livestock to market… If you were interested, the railroad would put you on a special land-seeking train. If you decided to buy, the price of the train ticket would be applied to the price of the land.” – Nebraska Studies

In our modern era of convenience, many are choosing to flee areas of the U.S. once considered an ideal place to settle down or raise a family. Folks are increasingly unhappy with high taxes and the cost of living, crime, burdensome regulations, a growing infringement on constitutional rights, and the socialized political correctness that characterizes many “blue states” vs. “red states” across the nation.

“During the 1980s, Democrats were associated with the color red, while Republicans were represented by the color blue. It was during the 2000 presidential election when journalist Tim Russert used the terms “red states” and “blue states” based on the colored maps that were used during his televised coverage. Since that time, media outlets have used red for Republican and blue for Democrat as the standard color scheme for their maps.”

It makes perfect sense that people prefer to live and work in a safe, business-friendly, and fiscally responsible state. If a state reverses on its principles, the voters can vote out the politicos responsible for reckless mismanagement or simply move to a different state without an entrenched political class that deprives you of life, liberty, and the pursuit of happiness.

Millions are fleeing high-tax states to pursue a low-cost American Dream… “Evidence suggests the burden of state and local government was an important factor for families moving around the country in search of the American Dream. Millions of regular people left states that penalized them for working hard, seeking or creating jobs, in favor of states who encouraged those things… State and local officials should learn from the past. But, unfortunately, new governors and state legislatures in high-tax states like Connecticut have doubled down on past policies by keeping taxes and spending high or raising them even further. And things are getting worse in the highest-taxed state in the country, New York, which has lost more than 200,000 people since just 2015. No one should be surprised.” – NYPost, Jan. 18

Unfortunately, for the progressive left, states with a Democrat governor alongside a Democrat-controlled legislature are in the worst fiscal condition. A study released by Truth in Accounting found that the majority of states in much better fiscal health are under Republican control.

The top 10 states with the highest unfunded liabilities per citizen are:

Kentucky is the only exception with a Republican-controlled legislature and governor at the time of the study.

The top 10 states with a surplus per citizen are: 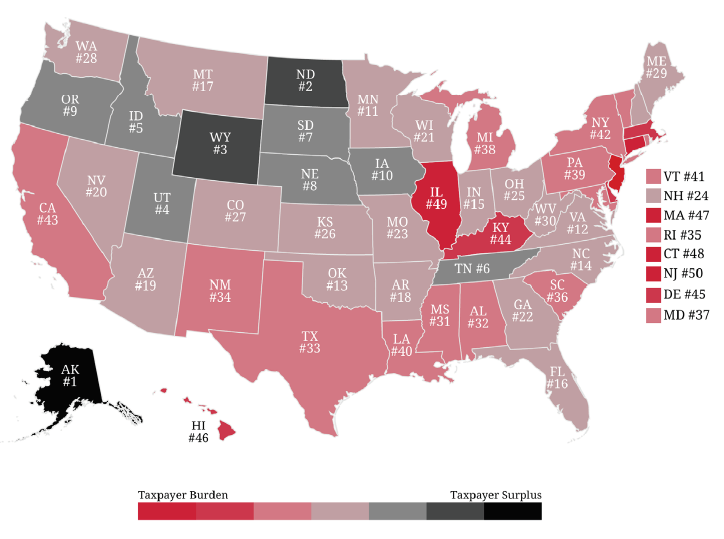 New IRS data reveals winners and losers of wealth migration across 50 states… “On the losing side, New York suffered the worst outflow of money of any state in 2018. The Empire State lost a net $9.6 billion in income, or more than 1.3 percent of its AGI base. California was next, losing a net $8 billion, followed by Illinois and a loss of $5.6 billion. New Jersey and Maryland were in 4th and 5th place, with $3.2 and $1.7 billion in losses, respectively.” – Wirepoints, Jan. 5

Why so many of America’s financial elite have left Greenwich… “Connecticut lost $1.1 billion in wealth to other states in 2018.” – Yankee Institute, Jan. 10

“Leftugee” is a new moniker making its way through the media that describes a Democrat, progressive, or socialist who is fleeing from the financial and big-government hardships their blue-state politicos created in the first place. While they are moving in pursuit of more affordable housing and a higher quality of life, it does not mean they prefer a red policy model of low taxes and fewer services, which creates a dilemma for a red state on the receiving end of the current trend.

Blue-state migrants are slowly nudging the politics of their newly-found utopia to the left and reshaping congressional districts. That dynamic is a big reason why Colorado transitioned from red to purple to almost completely blue over the last decade or so. Colorado experienced a net inflow of more than 100,000 folks from California, Illinois, and New York between 2010 and 2016. The following video is a clear example of what is taking place in Denver.

The growing tension within states that are experiencing the consequences of blue-to-red migration is obvious if you consider the battle over gun control in Virginia. In formerly-red Virginia, the most liberal Democratic government in the state’s history has taken control and brought forward a rural backlash over the Second Amendment. It is the first time I have seen a battle over the right to bear arms become such a public spectacle on mainstream media.

The Democrats may have unintentionally stumbled upon a solution to a problem they find with the Electoral College process: Invade the red-states and turn them blue.

America: The Story of Us Westward Oregon Trail

The Great Exodus of ‘Leftugees’ from Blue States to Red

The Great Exodus of ‘Leftugees’ from Blue States to Red