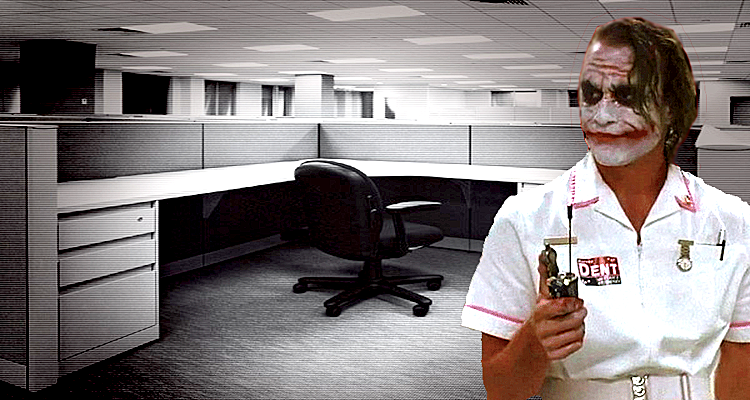 It can be difficult to find a bear among analysts in the commercial real estate market despite the fact that office vacancy rates continue to rise across the country and distressed mortgages for office buildings are at the highest level since the Great Financial Crisis. More than two years after COVID-19 transformed the world of work, there are signs of a slow-motion trainwreck taking place at your former office cubicle. The commercial market includes manufacturing space, warehousing operations, consumer retail frontage that occupies a variety of property types, and corporate office space. They all have their own dynamic and localized market variables vs. the national and local economies. This article is focused on the big picture of office space that’s responsible for leasing large swaths of square footage within commercial buildings.

The impact on real estate due to the pandemic is unprecedented and continuing. Folks who were a slave to the rat race commute, and a maze of office building cubicles are keeping their newfound “work from home” (WFH) arrangements and flexible hybrid working models permanent. That phenomenon continues to transform how, where, and when we work if the job doesn’t require in-person labor or professional services. The exodus from large metropolitan areas in search of a better quality of life and/or a WFH paradise contributed to a sellers’ market and the growing unaffordability of residential real estate. You can find my take on it from last month in “The Illusion Next Door to Housing Bubble Happiness.” The appearance of a pandemic in retreat will not slow the diaspora from the megalopolis anytime soon.

The exodus continues from America’s biggest cities… “Covid, crime and hybrid work are remaking urban life… despite some gains in big traditional cities, roughly 80% of all job growth has been in the suburbs. For the past decade, the leading job creating metros are largely away from the big coastal cities… These areas, in which offices tend to be spread out largely in suburbs, most people live in more spacious accommodations and rarely take transit, are ideal for an online or hybrid work model… Online and hybrid work is not about to go away. Stanford economist Nicholas Bloom suggests that even after Covid has faded, remote workers will constitute at least 20% of the workforce, more than three times the pre-pandemic rate. Midtown New York offices are still barely 50% full — hybrid work has turned central business districts into anachronisms. To be sure some businesses will remain, but much of the workforce will be, for the most part, somewhere else.” – UnHerd, Mar. 28

One outspoken bear in the commercial real estate industry is J. Scott Scheel at The Commercial Academy. He’s an entrepreneur, founder of multiple national businesses, a commercial real estate developer, and educator. His companies manage over 6 million square feet of commercial properties across 30 states. He appeared on Fox Business in January to discuss the coming “bloodbath” that will be exposed by the troubled asset deferral program as part of the CARES Act.

Property analysts and the mainstream financial press have touted reports of an increase in signed leases in the largest U.S. cities. The problem brewing under the hood is that the amount of square footage that’s being leased is shrinking.

Big NYC office tenants quietly shrink square footage in ‘major reset’… “Some large new Manhattan office-lease signings this year seemed to bode well for the pandemic-battered commercial market… But there’s a shadow over the deals as well. All of them were for much less space than the companies had previously, a trend that Wharton Property Advisors president Ruth Colp-Haber views as portending a “major macroeconomic reset” looming in the office market… Most landlords and brokers downplay the threat. They routinely cite positive data such as a large first-quarter increase in leasing volume.” – NYPost, May 8

Commercial buildings that will go bust have only begun to surface in the private sector, and state and local governments are also dumping rented office space that will add to the carnage.

Another Office Tower Goes Bust: CMBS Holders to Eat Remaining Losses… “Older office towers are besieged. Working-from-home and hybrid-work aren’t helping. The losses are huge… Blackstone is walking away from the 26-story 621,000-square-foot office tower at 1740 Broadway in Midtown Manhattan that it had bought in 2014 for $605 million. The two biggest tenants moved out well before their leases expired: L Brands, occupying 77% of the rentable area (lease expires March 31); and law firm Davis & Gilbert, which had 15.8% of the space. Now the building is mostly vacant. The property, built in 1950, is the collateral for a $308 million loan that was originated by Deutsche Bank and securitized into a single-asset single-borrower CMBS in 2015. This CMBS is backed by only the loan on this building, and there is no diversification within it. Now Blackstone is letting the holders of the CMBS have the building and eat the losses.” – Wolf Richter, Mar. 22

What’s giving the commercial office sector a cushion before bankruptcies begin to pile up are long-term leases that can span a decade. Barclays analyst Lea Overby walked CNBC through the potential red flags in the office building market. Take note of the office building occupancy rates for some of the largest cities in the U.S.

Cushman & Wakefield’s global head of economic analysis and forecasting Rebecca Rockey notes the rising office vacancy rates. She tried to find green-shoots in the office sector and attributed future defaults to older office buildings that may not have modern amenities and a contemporary technology infrastructure. 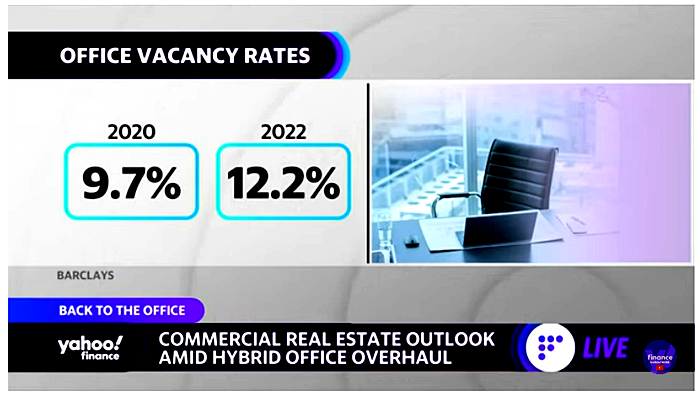 I often see missives on social media that point to how infallible real estate investment trusts (REITs) are due to the rental yield they pay. One thing about those REITs is that they’re very sensitive to the bond market. When bond yields are trending low, investors accept a lower yield and pay more for their REITs. That was beneficial for the real estate sector for a very long time. The current increase in the 10-year Treasury yield has brought it above the dividend yield paid on the index of U.S. REITs, and that scenario has led to a spike in REIT yields, which causes their share price to go down. That dynamic is similar to government bond income funds. When interest rates are low, the share price rises. But when interest rates are rising, the share price falls and dividends paid will not make up the difference. 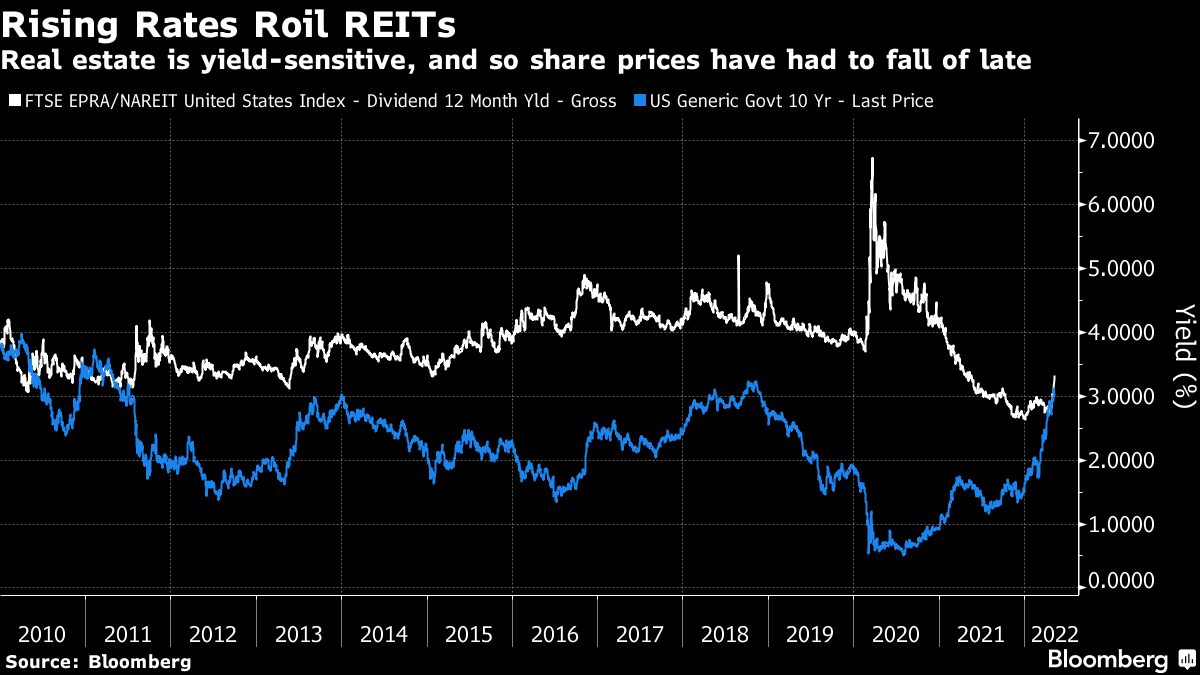 Office REITs plunged during the first few months of the pandemic and never regained all of the losses. It’s becoming more obvious that the commercial office sector is not returning to its glory days before the pandemic since office REITs are selling off. Apartment REITs were expected to benefit from the WFH trend, but even their price is below the level of early 2020. 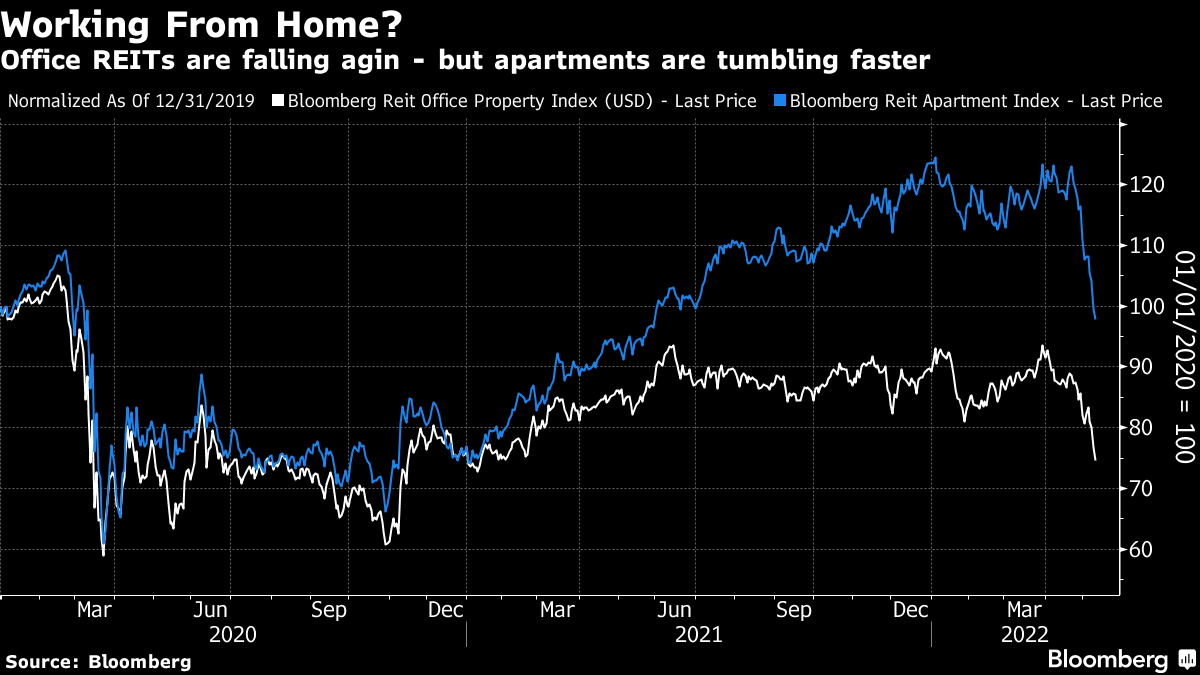 The way the office sector is performing should be a warning that the WFH phenomenon will continue to have profound economic effects in the U.S. as everyone adapts to a home-office world. There is also a contagion risk on the horizon due to U.S. banking institutions that are exposed to the commercial real estate sector in Russia that’s on the brink of collapse. The negative trends are far from played out.

Why Global Commercial Real Estate Crash Is Inevitable In The Next 2-5 Years and How It Will Cause Major Global CRE Foreclosures, Bankruptcies, and Change The World?… “The commercial real estate market seems to be taking a turn for the worse. Is there a fatal crash on the horizon? When we study the indicators and recent events, it appears there won’t be a recovery. The situation will continue to deteriorate.”  – Ashok Khedkar, May 10

The Illusion of Happiness by Steve Cutts 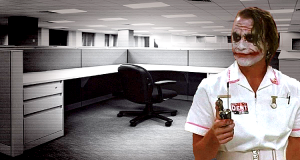