Interest rates jumped last month after a disruption in short-term lending markets. Banks and other financial institutions count on the interbank lending markets to ensure they have access to funding. To compensate for a lack of liquidity, the Fed began giving financial institutions enough cash in return for safer assets like government treasuries and bonds. The only difference between the Great Financial Crisis (GFC) bailout and the current scheme is that the Fed is purchasing shorter-term debt instruments instead of longer-term debt.

The Latin phrase “quod erat demonstrandum” (QED) translates to “what was to be shown,” which is a formal way of ending a mathematical proof or logical argument to show that the proof or argument is complete. Its purpose is to signal the reader that the immediately previous statement is the original statement trying to be proved. Got it?

Whatever the Fed calls the reopening of a special repo financing facility not used since the GFC to address overnight funding liquidity issues, its effects are the same. It will create money out of thin air and buy assets from financial institutions or TBTF banks, who then pour their capital into other assets and create more debt, malinvestment, wealth inequality, and social conflict. Nothing like a dose of debt monetization to help assuage any fear the market may have concerning a liquidity crisis.

“So, unlimited guarantees, unlimited money printing and unlimited currency swaps and, yeah, they truncated the crisis (GFC), but all that happened was the bad debts, the leverage and the problems were now lifted up to the central bank level. You’ve got this progression. First, it is the hedge fund. Then, it’s Wall Street. Now, it is the central banks. Who is going to bail out the central banks? That problem has not been solved, and it’s still on the table.” – Jim Rickards, Jul. 18

“It smells as sweet as QE, but the spin of some other name and rationale may be more palatable to the public. By not calling it QE, it may allow the Fed more leeway to do QE without being in a recession or bringing rates to near zero in attempts to avoid becoming a political lightening rod.” – RIA, Oct. 3

“Powell is a smart man and means well, but he was handed a lousy hand by Bernanke and Yellen. Interest rates need to go to zero, the balance sheet needs to expand, and the yield curve needs to normalize. Powell is in denial on all three. This will be interesting.” – Jim Rickards, Oct. 10

Since the GFC, the world’s major central banks lent incredulous amounts of low-interest money and bought trillions of dollars in bonds and assets, all in an attempt to stimulate the global economy out of financial Armageddon. Some central banks continue to grow their balance sheets, as the European Central Bank announced the restart of a multi-trillion bond-buying program last month and the Bank of Japan has utilized bond buying as stimulus over the course of their “lost decades.”

Central bank stimulus is distorting financial markets, BIS finds… “The BIS, the central bank for central banks, said on Monday that, while the immediate impact had eased the severe market strains created by the 2008 financial crisis, there had been several negative side-effects. These included a scarcity of bonds available for investors to purchase, squeezed liquidity in some markets, higher levels of bank reserves and fewer market operators actively trading in some areas. ‘Lower trading volumes and price volatility, compressed credit spreads and flatter term structures may reduce the attractiveness of investing and dealing in bond markets. Some players may leave the market altogether, resulting in a more concentrated and homogenous set of investors and fewer dealers. This ‘could result in market malfunctioning when large central bank balance sheets are eventually unwound’, the BIS warned. ‘For instance, it could make it more difficult for reserves to be redistributed effectively between market participants.’” – FT, Oct. 7

On the heels of that prescient BIS note, the Fed approved the loosening of Dodd-Frank rules surrounding banks’ capital, cash, and living will requirements.

Fed approves rules loosening Dodd-Frank bank restrictions… “The Fed on Thursday approved a set of rule changes that implement legislation passed by Congress last year to loosen restrictions, particularly for smaller community banks, imposed by the Dodd-Frank Act passed in 2010…. The Fed’s changes will ease requirements on banks for holding capital and cash and also for the so-called living wills big banks must develop in case they fail. The Fed approved the capital and liquidity changes and the modifications on living wills by 4-1 votes, with Fed board member Lael Brainard casting the lone no vote. She said she believes the changes will weaken critical safeguards governing the largest institutions.” – AP, Oct. 10

Fed Balance Sheet Expansion, Unicorns, Unintended Consequences and Gold… “But make no mistake, the repo operations function as emergency room triage until the Fed and the Treasury Department formalizes another round of money printing, or QE or whatever you want to call it. At this point it is nothing more than a game of Orwellian semantics.” – Investment Research Dynamics, Oct. 10

After the Fed extended temporary repos that began in September out to November, it fired off a bazooka today.

Fed to Start Buying $60 Billion of Treasury Bills a Month From Oct. 15… “The Federal Reserve said it will begin buying $60 billion of Treasury bills per month to improve its control over the benchmark interest rate it uses to guide monetary policy after turmoil rocked money markets in September. The central bank, in a statement Friday, stressed that ‘these actions are purely technical measures to support the effective implementation’ of interest-rate policy and ‘do not represent a change’ in its monetary stance. ‘In particular, purchases of Treasury bills likely will have little if any impact on the level of longer-term interest rates and broader financial conditions.’” – Bloomberg, Oct. 11

That $60 billion a month is in addition to:

It appears that $60 billion of “not QE” a month is not enough to plug a growing list of liquidity holes under the hull of the global banking Titanic, as the Fed will continue with $75 billion in overnight repos and $35 billion in term repos twice a week until the second quarter of 2020. Under the current plan, the Fed’s balance sheet will revisit the $4.3 trillion mark by June of next year. Keep in mind that the Fed went from holding less than $1 trillion in assets in 2007 to roughly $4.5 trillion in 2015. The quantitative tightening TaperCaper slowly trimmed its balance sheet back to under $4 trillion, but that move shrank the level of reserves available to banks.

The Fed’s press release states that the current purchasing “actions are purely technical measures to support the effective implementation of the FOMC’s monetary policy, and do not represent a change in the stance of monetary policy.”  I have heard there are bridges available for purchase in Brooklyn.

For a TaperCaper recap, consider the following articles I published since January:

Never forget the slow train wreck that led to the GFC. 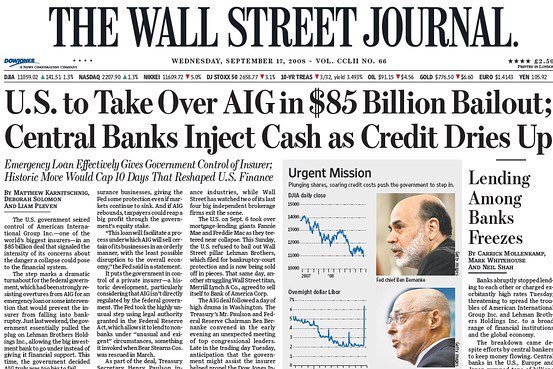 The Remains of the Day – Meaning of “Quod Erat Demonstrandum”