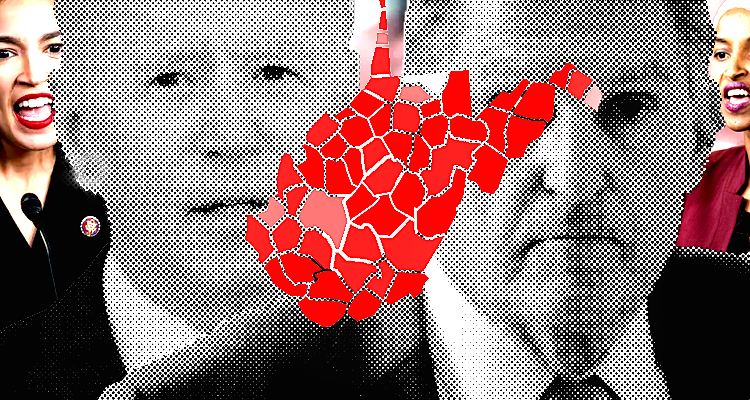 If John Denver was still alive, he might be penning a new folk song about West Virginia turning red and nuking Biden’s socialist squad on Capitol Hill. The so-called progressives that touted a theme of unity during the 2016 and 2020 presidential campaigns have often shown their true colors, but Bette Midler bested them all with a demeaning outburst yesterday directed at West Virginians. Before reading Midler’s rant, be mindful of Hillary Clinton when she branded anyone that did not follow her political ideology as a “basket of deplorables that are racist, sexist, homophobic, xenophobic, Islamophobic, you name it.” That statement and her body collapse at the 911 memorial ceremony were defining moments that solidified Trump’s landslide into the White House.

This is how the elite feel about normal Americans… “Bette Midler, 76, draws the ire of conservatives AND liberals after branding people in West Virginia ‘poor, illiterate and strung out’ during attack on Manchin… One Twitter user commented: ‘Do you feel good tweeting this from your mansion in LA?’… Another Twitter user wrote: ‘Remember this when you think about voting blue next time around.’” – Daily Mail U.K. 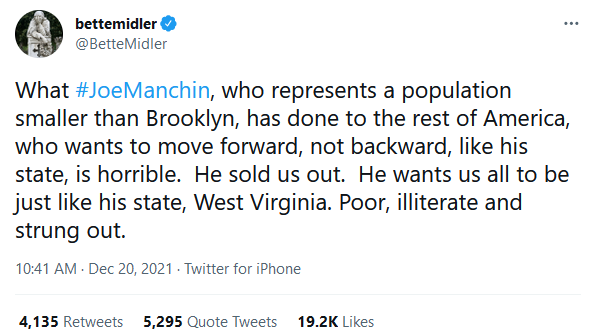 I’m sorry, but that is where we’re at. Deal with it. Turning a blind eye to modern-day bourgeois Bolsheviks that currently dominate the halls of U.S. political power will not be pacified by inoculating yourselves with an experimental gene-modifying Kool-Aid in order to buy or sell. If a threatening message the White House pushed this past weekend does not shake you out of a pacifist slumber, perhaps you’re concerned with protecting something other than your liberty, freedom, and family.

If you don’t protect the freedom that those before you died for, you will have nothing. The Great Reset players are propagandizing everyone to believe “you will own nothing and be happy.” The same hypocrisy is evident as citizens are slandered as racist when asking for an ID to vote, yet those same plebes are going along with showing their papers and ID to conduct business, purchase food and services, or have a job, and it’s all based on a fraudulent narrative that is removed from science.

West Virginia’s road to becoming a “red” state did not happen in one election. It was a process that began with the Obama administration setting out to destroy the coal mining business for greenies. Senator Manchin and his West Virginian constituents are now in the crosshairs of self-righteous prejudice that demands their way or the highway, rather than negotiating a reasonable social spending bill.

West Virginia: How the Bluest State Became the Reddest… “In Boone County, a short drive from Charleston, the mining cuts have shattered the economy — more than 4,000 jobs lost in the last five years… And that’s in a county with only 24,000 people. Coal production in the county dropped from 22,400 tons in 2010 to 8,400 in 2015… And for a lot of people, the sources of those changes are clear: Democrats and environmental regulations… ‘When Obama first got into office, he said he was going to bankrupt the coal industry and he did. And he done it by regulation,’ said Steve Kennedy, who works at the Hobet Mine in Boone County… In a larger sense, though, West Virginia’s political shift is about more than economics. It’s about changes in the parties, the way the state’s population views itself and the way it views Washington… Ask people in and around Charleston why the state has moved away from the Democratic Party and one of the most common responses you get is that the party has become too ‘liberal.’” – NBC News, 2016

Sen. Joe Manchin’s position on Build Back Better reflects the reality of West Virginia politics… “Manchin’s decision to pull out of negotiations over the Build Back Better Act is likely to be its death knell in an evenly divided Senate, and more liberal Democrats were quick to say he would pay a political price for it.” – Washington Post, Dec. 19

Senator Manchin stands on solid ground to defend his good-faith effort as the national debt breached $29 trillion last week and negotiations dragged on since last spring. It’s not about a promise, but the socialists will have you believe that’s the claim they hang their hats on. It’s about votes, political power, fiscal restraint, a bill that is balanced with cuts and revenue, and buying more time without collapsing a fragile economy with a 125% debt-to-GDP ratio that is indicative of bankruptcy. 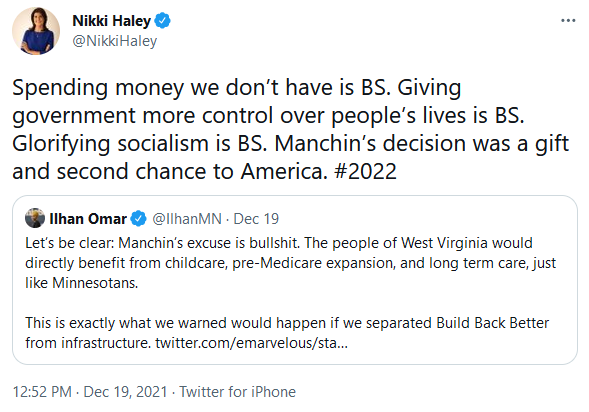 Manchin has been consistent on the following points since April 2021:

Biden’s cohorts repeatedly ignored Manchin’s baseline. The likelihood of a red wave in the 2022 midterm elections is now baked in the cake. Manchin defended his stance after receiving a verbal beating from the squad and the White House.

‘I’m From West Virginia’: Joe Manchin Says He Won’t Be Bullied Into Submission On BBB… “He could not justify a vote for anything he could not go home and explain to his constituents… he was not backing down on his promise to vote on President Joe Biden’s massive Build Back Better spending package. Manchin told anchor Bret Baier on Fox News Sunday that he was a definite ‘no on this legislation,’ prompting outrage from many in his own party. ‘I knew where they were and I knew what they could and could not do. They just never realized it because they figured, surely to God we can move one person, surely we can badger and beat one person up, surely we can get enough protesters to make that person uncomfortable enough,’ Manchin continued. ‘Well, guess what? I’m from West Virginia. I’m not from where they’re from, and they can just beat the living crap out of people and think they’ll be submissive, period.’ Manchin has remained consistent not only with his public statements but with an agreement in July with Senate Majority Leader Chuck Schumer.” – Daily Wire, Dec. 20

“Reminder, Manchin and Schumer signed an agreement in July, then Democrats spent five months disregarding every provision of it and somehow thinking they could bully Manchin into going along.” – Phil Kerpen (@kerpen), Dec. 19

Once upon a time, I drove through the Appalachian backroads of West Virginia on a hot summer day with the following song blaring out of my windows. It was glorious. 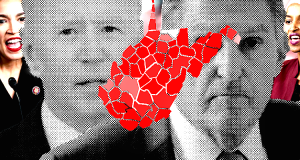