The Surge of “Little Green Men,” and Metal is Poised to Strike – Part 2 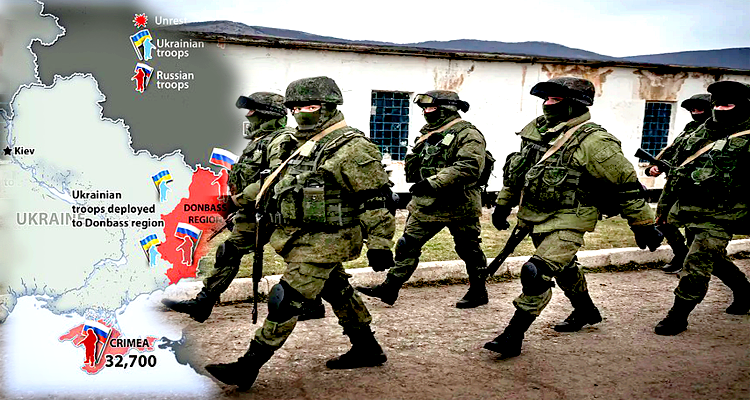 There is a lot going on in the world that can distract you from ongoing geopolitical issues that can have a significant impact on global financial markets. A case in point is the renewed buildup of Russia’s little green men and metal in a bid to strengthen their western front with Ukraine in support of separatists in the “Donbas War” and Russia’s occupation of Crimea. Russia’s increase in military readiness and the positioning of additional hardware last week is occurring in conjunction with numerous kinetic exchanges along a tepid ceasefire line where both sides blame each other. The following interactive map for Ukraine is tracking events in real-time in the Donbas region. 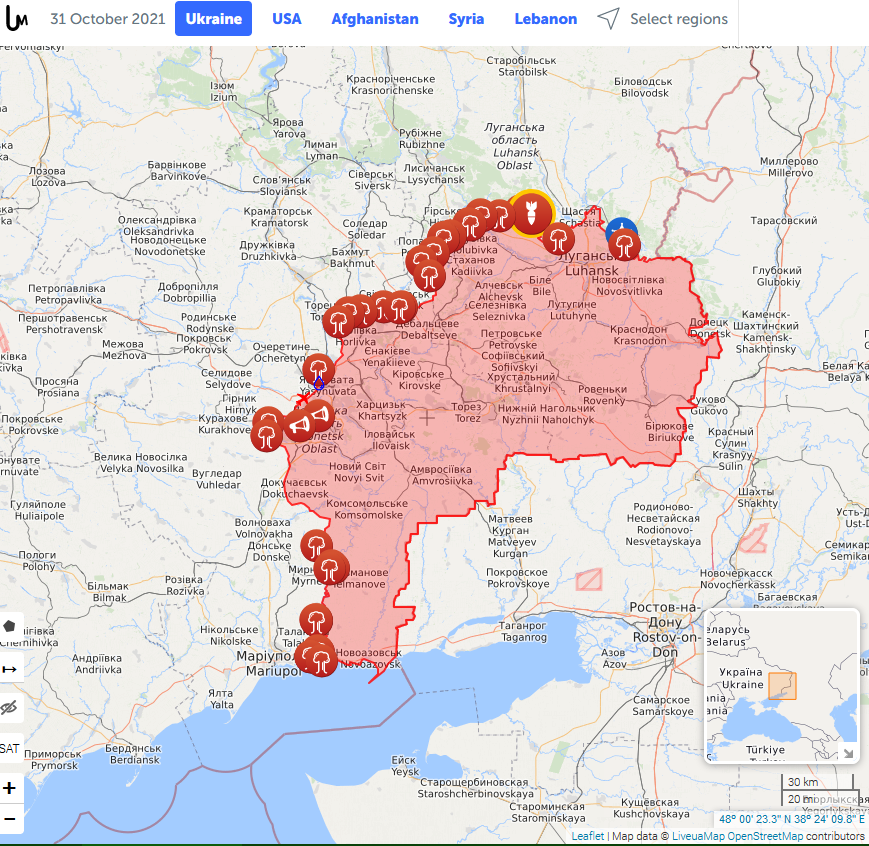 Here is an excerpt from Part 1 published in April 2021:

“Since Russia annexed Crimea from Ukraine in 2014, there have been ongoing skirmishes between Ukrainian troops and pro-Russian ‘separatists’ in eastern Ukraine’s Donbass region and intermittent periods of cease-fire. On March 30, 2021, the U.S. European Command raised its watch level from “possible crisis” to “potential imminent crisis” (the highest level) in response to the buildup of Russian forces on the border with Ukraine. Today’s attempt to negotiate a ceasefire failed with objections by Russia over the wording.”

In July, Ukraine’s press secretary made the following statement in a press release:

The United Nations describes conditions in Donbas without the sanguine tone found in Ukraine’s press release. In September, the White House released a lengthy joint statement on a strategic U.S.-Ukraine partnership. The opening bullet point cut to the chase.

“In the 21st century, nations cannot be allowed to redraw borders by force. Russia violated this ground rule in Ukraine. Sovereign states have the right to make their own decisions and choose their own alliances. The United States stands with Ukraine and will continue to work to hold Russia accountable for its aggression. America’s support for Ukraine’s sovereignty and territorial integrity is unwavering.”

Additionally, in response to Belarus-Russia joint military exercises on Belarusian territory and developments over a Russian-Belarussian economic union, Poland has announced a doubling of its military personnel from 150,000 to 300,000.

Poland unveils new defense law to counter hybrid threats and ‘Russia’s imperial ambitions’… “‘If you want peace, prepare for war,’ said Jarosław Kaczyński, deputy prime minister with responsibility for national security… pointed to what he said was the growing threat of Russia, including new forms of hybrid warfare (i.e. economic migrants)… Kaczyński argued that a country whose borders are also the eastern frontiers of NATO and the EU must have ‘a serious and independent deterrent force’. While the collective defense mechanism of NATO was ‘very powerful’, he argued that the organization was only able to rally its forces with a lag… ‘The situation has worsened: we have a hybrid war, provocations, the Russian army and Russia’s imperial ambitions,’… He said that Moscow’s military exercises were aimed at ensuring that units of its army were ‘ready for offensive actions’ and that Moscow had been ‘taking steps’ towards the rebuilding of its pre-1991 empire. Poland’s ‘geopolitical situation’ therefore makes it necessary to bolster defenses… The proposed defense act, therefore, includes plans for a larger military budget. The army’s headcount is also to increase to a minimum level of 250,000 professional soldiers and 50,000 soldiers (in the Territorial Defense Forces.” – Notes from Poland, Oct. 26

The renewed fear of escalation in eastern Ukraine made headlines a few days ago after the Ukrainian military fired upon “separatist” artillery with a drone purchased from Turkey. Moscow is not pleased that NATO member Turkey sold Ukraine that weapon system since Russia is selling Turkey air-defense systems. It’s complicated and it’s the first time a tactical Bayraktar TB-2 drone was used to destroy military equipment in the Donbas region. Rodion Miroshnik, who represents the self-proclaimed Lugansk People’s Republic, warned that an escalation may be imminent and the drone strike ruined any chance of a negotiation to end the conflict. 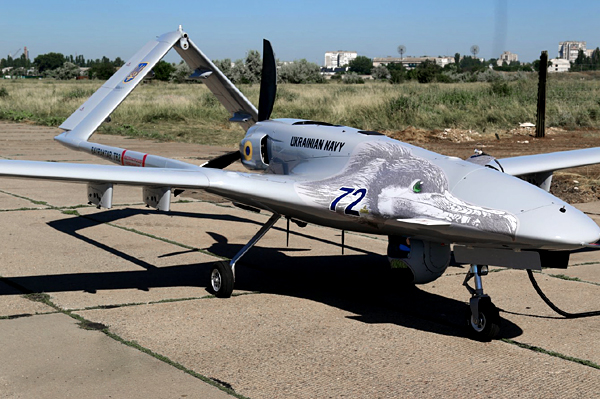 Despite Vladimir Putin’s claim that Russia is seeking peace in the region with an “unconditional implementation of the Minsk agreements,” Ukraine is highly skeptical due to numerous offensive ceasefire violations this year before the defensive drone strike. Putin has repeatedly warned that any expansion of the NATO military infrastructure on Ukrainian soil would represent a “red line.” Their current relationship is not exactly peachy because Russia suspended its mission to NATO this month after eight of its diplomats were expelled from NATO on accusations of espionage.

Russian troop movements near Ukraine border prompt concern in U.S., Europe… “In July, Putin claimed that Ukraine was being functionally controlled by Western nations to foment anti-Russian sentiment. ‘We will never allow our historical territories and people close to us living there to be used against Russia,’ Putin wrote. ‘And to those who will undertake such an attempt, I would like to say that this way they will destroy their own country.’ In comments to the Valdai Discussion Club this month, Putin said formal NATO membership for Ukraine may never happen, ‘but military expansion on the territory is already underway, and this really poses a threat to the Russian Federation.’ Dmitry Medvedev, former Russian president and now the deputy head of Russia’s security council, called Ukraine a ‘vassal state’ that is ‘under direct foreign control’ in an Oct. 11 article in the Kommersant newspaper. Previously, Belarus President Alexander Lukashenko, an ally of Putin, accused the United States of building NATO military bases in Ukraine using training centers as a cover.” – Washington Post, Oct. 31

The winds of change are blowing pretty hard and the U.S. Pentagon chief just returned from a whirlwind tour of Black Sea nations that are considered a front to confront Russia.

Pentagon chief stresses security cooperation as key to stopping Russia’s Black Sea ‘aggression’… “With the high-profile trip to Georgia, Ukraine and Romania, Austin signaled the Biden administration sees the Black Sea as a front to confront Russia… Lt. Gen. Ben Hodges, who formerly led U.S. Army forces in Europe said ‘it’s clear the Russians will only stop when they are stopped… The Russians are already aggressive in every domain.’ Hodges recommends Black Sea states allied with the West band together and advocate for themselves in NATO deliberations, as Baltic Sea allies did before they won a more robust NATO presence.” – DefenseNews, Oct. 26

Investors should remain alert to any shift in sentiment regarding hotspots around the world. While reviewing charts for the defense industry stock symbols noted below, a few are rising after a pullback and/or consolidation. 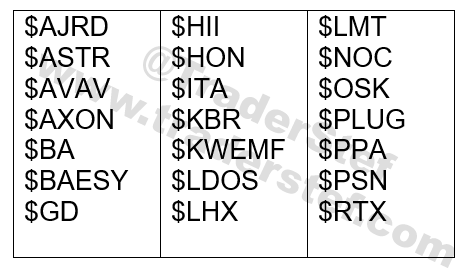