The events leading up to and transpiring since last weekend are no longer borderline insanity that’s attributable to mutual ignorance instead of seeking stability among the great nations. It clearly transformed into a full-blown mutually-assured destruction (MAD) campaign coordinated by incompetent politicos and programmed plebes who have mistaken geopolitics for reality TV that has an on/off remote control. 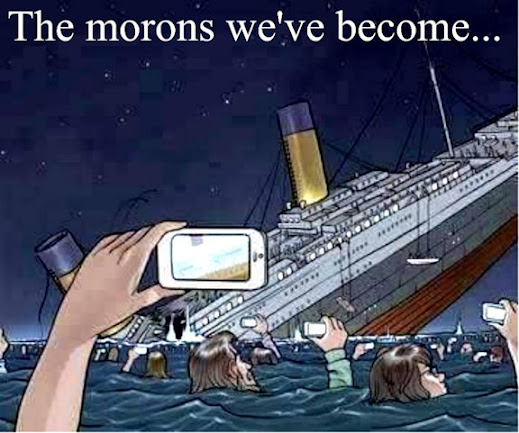 On numerous occasions, the leadership of Russia has warned that escalatory provocations, the use of NATO-supplied weaponry and/or logistical support, and an attack on Russian sovereign territory would result in a devastating military response to counter any systemic threat. Here is one example from this past summer and comments by Russia’s defense minister on Sep. 21 following Putin’s announcement that referendums would be held in the Donbas region and the military was under “partial mobilization” orders:

Russia’s Medvedev: Attack on Crimea will ignite ‘Judgement Day’ response… “In the event of an attack on Crimea, Medvedev was quoted by TASS news agency as saying, ‘Judgment Day will come very fast and hard. It will be very difficult to hide’… His comments were aired a day after a Ukrainian official suggested that Crimea could be a target… Earlier on Sunday, Interfax news agency quoted Medvedev as telling World War Two veterans: ‘If any other state, be it Ukraine or NATO countries, believes that Crimea is not Russian, then this is a systemic threat for us.’” – Reuters, Jul. 17

Russia Defense Minister Shoigu: at war ‘not with Ukraine,’ but with ‘collective West’… “‘At this point we are really at war with the collective West, with NATO, or vice versa – with NATO and with the collective West,’ he added, stressing that Russia was successfully finding ways to counter weapons being supplied to Ukraine by the West. ‘As we talk about this, we mean not only the weapons that are supplied in huge quantities. Naturally, we find ways to counter these weapons. We have in mind, of course, the Western systems that there exist: communication systems, information processing systems, reconnaissance systems and satellite intelligence systems.’” – Gibraltar, Sep. 22

President Zelensky has doubled down on his rhetoric after minor successes in gaining plots of land in the ground war. On Oct. 6, during a video call to the Australian Lowry Institute, he said that “NATO should preemptively strike Russia” in order to “exclude the possibility of use of nuclear weapons by Russia.” Kremlin Press Secretary Dmitry Peskov said the world should pay attention to Zelensky’s words and called his speech “a call to start a world war with unpredictable and monstrous consequences.” Kremlin spokeswoman Maria Zakharova said he turned into a monster whose hands could destroy the planet. On Oct. 8, the Kerch Strait Bridge (aka Crimean Bridge) built by Russia that links Russia with Crimea was bombed at dawn. It was described as an act of terrorism after an investigation by the FSB.

Former Joint Chiefs Chairman Admiral Mike Mullen appeared on ABC This Week and stated that he’s “concerned about the language” from the Biden administration on nuclear war and said the U.S. should “do everything we possibly can to try to get to the table” and negotiate with Russia.

Here is an excerpt from “The Surge of ‘Little Green Men,’ and Metal is Poised to Strike” – Part 7, published on Sep. 30:

“Yesterdays are forever gone after the world’s lords and plebes faced an unpleasant reality today about where we’re at vs. what the future could have been. The West has lost Russia and that infuriates the collective West’s elite to no end, except for war, and yet Moscow extended its restraint once again to negotiate peace with diplomacy. A brief summary of events last week that led to a successful citizen-based referendum vote in the Donbas and surrounding region with Russia’s partial mobilization of its military reserves can be found in the first half of ‘A Dark Age Winter of Discontent in Europe – Part 3,’ published (Twitter thread) on Sep. 25.”

We need some adults in the room, not Zelensky and his cohorts. It became crystal clear that Ukraine was behind the attack on the Crimean Bridge after advertising a giant poster in downtown Kyiv where citizens basked in selfies (headline image) over the romance of war.

Ukraine celebrates Crimea bridge explosion with stamps… “Images of the new postage stamp were released just hours after the attack on the bridge along with a giant replica stamp featuring an artist’s rendition of the attack… At the giant stamp, people can pose in front of the burning bridge, with many using it as an opportunity to mock Russian President Vladimir Putin and the Russian military.” – 1News, Oct. 10

The celebratory atmosphere came to a resounding halt yesterday and today after Russian missiles pummeled Zelensky’s office in Kyiv, the German consulate, various types of infrastructure across the entire country, military targets, Ukraine’s Secret Intelligence Service (SBU) network, power grid installations, and disabled Starlink satellite access provided by Elon Musk that enabled Internet connectivity for Ukraine’s military operations. Ukrainian air defenses are being suppressed by Russian Electronic Warfare (EW) systems that will disable any new systems that NATO may be in the process of shipping. Zelensky is in full panic mode and calling on the E.U. and NATO for immediate assistance. 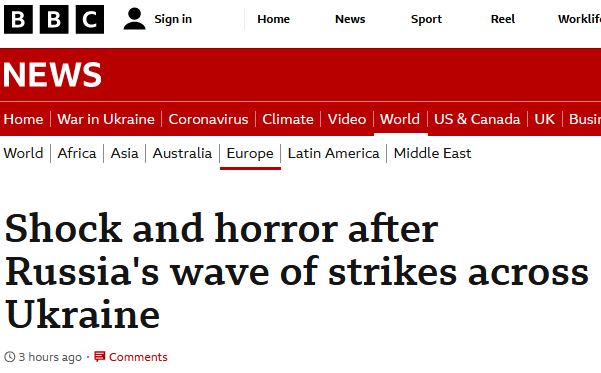 Countries that still have a working embassy within Ukraine advised staff to shelter in place, then depart immediately when it’s safe to do so. President Putin has stated that “it’s simply impossible to leave the crimes of the Kyiv regime unanswered. In case of continued attempts to carry out terrorist attacks on the territory of the Russian Federation, responses will be tough and correspond to the level of threats.” Dmitry Medvedev issued a statement saying “a direct response to the terrorist act of Ukraine on the Crimean Bridge can only be the direct destruction of terrorists” and posted a personal position on his Telegram account. Also, Russia recently launched its doomsday submarine Belgorod that’s loaded with Poseidon nuclear torpedoes. 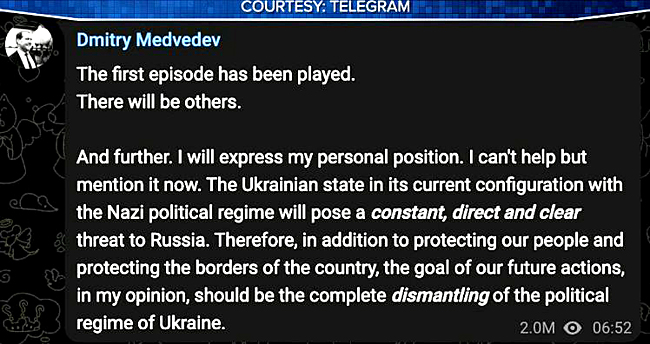 Zelensky asks G7 for Ukraine ‘air shield’, warning that Vladimir Putin still has ‘room for escalation’… “Ukraine’s president called on Western allies to fund an aerial defense system after 2 days of widespread Russian strikes on cities… Ahead of the G7 emergency meeting, the Kremlin said it expected more ‘confrontation’ with the West. ‘The mood ahead of the summit is well understood, it is easily predictable. The confrontation will continue,’ said Kremlin spokesman Dmitry Peskov, adding that Russia will ‘achieve its set goals.’ Peskov criticized Washington’s pledge to provide Ukraine with advanced air defense systems. ‘De facto, the United States is already bogged down in this affair,’ he said, adding that the deliveries will make ‘this conflict longer and more painful for the Ukrainian side.’” – SCMP, Oct. 11

At the G-7 summit today, the collective West’s leadership doubled down on promises to back Ukraine for “as long as it takes.”

The most disturbing development posted by Max Blumenthal this past weekend is an interview of a local official in Ukraine who jokes about massacring pro-Russian Ukraine citizens, that just happen to be where mass graves were found after the Russian military retreated and Azov moved in. You heard that right. Think about that after you review an analysis of recent war crime reports that populate the West’s legacy media. Also, consider ongoing ground reportage by the award-winning independent journo Eva Barlett on war crimes being committed in the Donbas region. 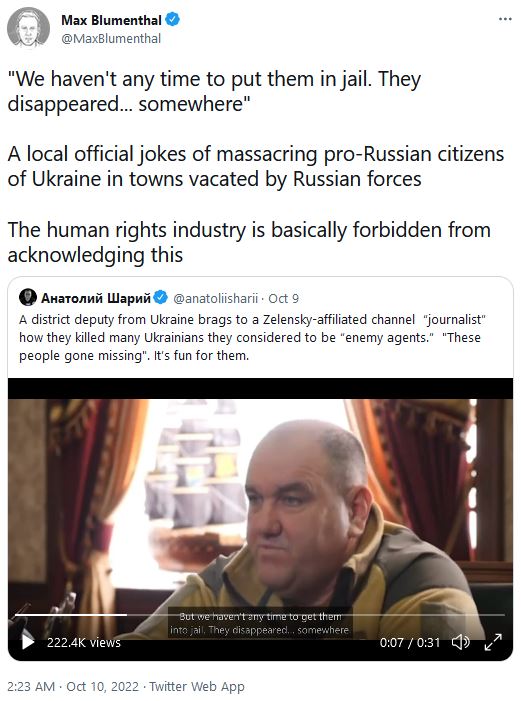 On Feb. 24 of this year, I recommended that everyone stock up on potassium-iodide tablets before retail availability sold out. On Mar. 10, the Wall Street Journal reported that “potassium-iodide pills that can protect against radiation poisoning are out of stock in much of the U.S.” One of the first countries in Europe that announced efforts to stockpile the pills was Poland in mid-September. Finland jumped on board today.

Households Should Stock Potassium-Iodine Tablets… “The Ministry of Social Affairs and Health has recommended that households in Finland iodine tablets in case of a radiation hazard emergency… The statement noted that in case of such an emergency, sheltering indoors was the main way for people to protect themselves from hazardous radiation… On Tuesday afternoon, Finland’s largest chain of pharmacy outlets reported stocks of iodine tablets had practically sold out nationwide… Efforts are being made to replenish the iodine stocks, but there is no precise schedule on when this will happen.” – yleNews, Oct. 11

I’ll close up shop tonight with a note about Zbigniew Brzezinski that sheds some light on the Ukraine situation and a must-see interview with Jeffrey Sachs (bio) from this past weekend. If you’re new to this “Little Green Men” series and wonder how we got here, my overview since April 2021 includes Part 1 (Twitter thread), 2 (thread), 3 (thread), 4 (thread), 5 (thread), 6 (thread), 7 (thread), and “Human Shields of Hypocrisy in the Ukraine War” (thread).

“Zbigniew Brzezinski negatively viewed the succession of Vladimir Putin after Boris Yeltsin. In this vein, he became one of the foremost advocates of NATO expansion. He wrote in 1998 that ‘Without Ukraine, Russia ceases to be a Eurasian empire.’ [80] He later came out in support of the 1999 NATO bombing of Serbia during the Kosovo war.” [81] – Wikipedia