The Kremlin’s military brass made a dramatic shift in its strategy on October 8 following the suicide bombing of the Kerch Strait Bridge (Crimean Bridge) that links the Russian mainland and the Crimean Peninsula. That attack was reported to have fingerprints of Ukraine’s SBU and British intelligence services and prompted the appointment of General Sergey Surovikin (aka “General Armageddon”) to take command of Russia’s special military operation (SPO). It was the first time the Russian Defense Ministry publicly announced the selection of a commander to lead all its military forces being deployed in Ukraine. 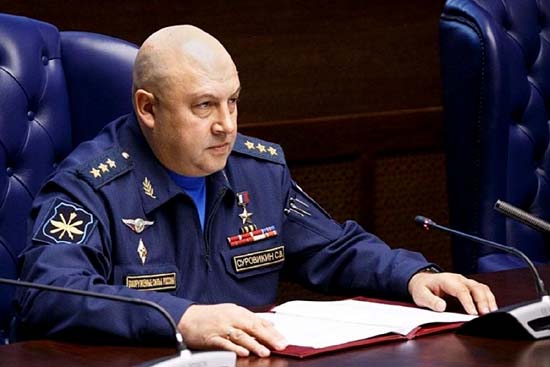 Before Ukraine blew up Kerch Bridge, British spies plotted it… “The Grayzone obtained an April 2022 presentation drawn up for senior British intelligence officers hashing out an elaborate scheme to blow up Crimea’s Kerch Bridge with the involvement of specially trained Ukrainian soldiers. Almost six months after the plan circulated, the bridge was attacked in an October 8th suicide bombing apparently overseen by Ukraine’s SBU intelligence services… At almost precisely the time that London reportedly sabotaged peace talks between Kiev and Moscow in April this year, British military intelligence operatives were drawing up blueprints to destroy a major Russian bridge… In the Kerch Bridge sabotage proposal, it asks ‘what countermeasures could be expected’ in response to its destruction. The blitz of retaliatory missile strikes on Ukraine on October 10th provides a likely answer.” – The Grayzone, Oct. 10

Two days after the attack, Russia unleashed a record barrage of long-range GPS guided cruise missiles across all of Ukraine aimed at specific military targets that included its nationwide electric grid. In Part 8 (Twitter thread), I wrote about the rhetoric, Russia’s “partial mobilization” to wartime status, events leading up to the Kerch Bridge attack, and the first wave of missile strikes that followed. Here is an excerpt:

“The events leading up to and transpiring since last weekend are no longer borderline insanity that’s attributable to mutual ignorance instead of seeking stability among the great nations. It clearly transformed into a full-blown mutually-assured destruction (MAD) campaign coordinated by incompetent politicos and programmed plebes who have mistaken geopolitics for reality TV that has an on/off remote control. On numerous occasions, the leadership of Russia has warned that escalatory provocations, the use of NATO-supplied weaponry and/or logistical support, and an attack on Russian sovereign territory would result in a devastating military response to counter any systemic threat.” – TraderStef, Oct. 11

Russia has repeatedly pummeled Ukraine’s electric grid with hundreds of missile strikes since mid-October. As of Nov. 18, the Zelensky regime estimated that roughly 30% of the country’s power stations were destroyed in one week, and the U.S. Pentagon estimates that 25% of the civilian population was living with intermittent or no electricity for communications, lighting, water distribution, Soviet-era centralized heating systems, railroads, and everything you can think of that requires power on a daily basis. General Mark Milley, the Chairman of the U.S. Joint Chiefs of Staff, warned that Russia’s “aerial attacks would continue and the potential onslaught could overwhelm the country’s ability to bring heat and power back online” (grid down).

Ukraine Urges Evacuations as Pressure on Electricity Grid Intensifies… “The calls to evacuate come as the situation around Ukraine’s electricity generation becomes increasingly dire. Over the past six weeks, Moscow has hammered Ukraine’s grid with more than 1,000 missile strikes and drone attacks, Ukrainian energy officials said. Almost half of the country’s power-producing capacity has been disabled. Last week, President Volodymyr Zelensky said 10 million people in Ukraine were without power.” – WSJ, Nov. 20

During the evening of Nov. 23, the Russian military launched one of its largest missile waves at infrastructure with devastating results that disabled power generation and distribution across the entire country. All four nuclear power stations of Ukraine, which include 15 reactors, are currently in shutdown mode, and thermal power plants were also shut down. Outages occurred in the neighboring country of Moldova and its breakaway state of Transnistria that rely on Ukraine’s grid for roughly 20% of their electricity. There are limited electricity imports from the European network that would only be available in Ukraine’s western cities.

Ukrainian energy systems on brink of collapse… “As the scope of damage to Ukraine’s energy systems has come into focus, Ukrainian and Western officials have begun sounding the alarm but are also realizing they have limited recourse. Ukraine’s Soviet-era power system cannot be fixed quickly or easily. In some of the worst-hit cities, there is little officials can do other than to urge residents to flee — raising the risk of economic collapse in Ukraine and a spillover refugee crisis in neighboring European countries… Prime Minister Denys Shmyhal said about 50% of the country’s energy infrastructure was ‘out of order’… Russians, he said, were mainly targeting substations, nodes on the electrical grid where the current is redirected from power stations. The main components of these substations are autotransformers — ‘high-tech and high-cost equipment’ that is difficult to replace.” – Washington Post, Nov. 23

What It’s Like When The Lights Go Out In A Warzone – Gonzalo Lira, Nov. 24

Western legacy media has focused their coverage on the collateral damage that has killed civilians, but more often than not those instances are due to Ukraine’s anti-missile systems that rain down debris and live warheads on the population. One example is when a Ukrainian missile landed in Poland and killed two civilians. Zelensky immediately blamed Russian missiles for the incident and begged NATO to take military action against Russia that would have initiated a WW3 nightmare. Within a day, evidence proved it was a Ukrainian missile that landed in Poland, and the Associated Press fired the journalist who initially filed the erroneous report that spread around the world.

War in Ukraine Reaches a Tipping Point… “Give President Joe Biden credit: he apparently wasn’t happy when Ukrainian President Volodymyr Zelensky attempted to lie the U.S. into war. There was a collective intake of breath in Washington and across Europe as everyone waited for a determination as to whose missile struck rural Poland last week. Thankfully—for the cause of world peace, anyway—the projectile was Ukrainian. But that didn’t stop Zelensky from beating the war drums… In addition to the financial costs, the risks of U.S. involvement are far greater with a war ongoing, particularly one in which Washington already is active and into which it could easily be drawn. Many in Washington don’t seem to appreciate that risk… Zelensky’s misleading missile gambit reinforces the necessity of a change in course for Washington… The U.S. and its allies should get busy erecting firebreaks to this conflict’s spread.” – The American Conservative, Nov. 24

A country that’s becoming uninhabitable due to a lack of functioning infrastructure and energy to support logistics for its military cannot wage and win a war. The next refugee stream to Europe that takes place as Ukraine approaches failed state status should pressure the U.S., NATO, and Europe to come to negotiate with diplomacy and find a solution between Ukraine and Russia. The Ukrainian military is being slaughtered in eastern Ukraine despite reports that Russia retreated from frontline territory in recent weeks. Russia actually evacuated from indefensible territory in order to save lives and harden its frontline as the 300,000 troops it mobilized get settled into position. 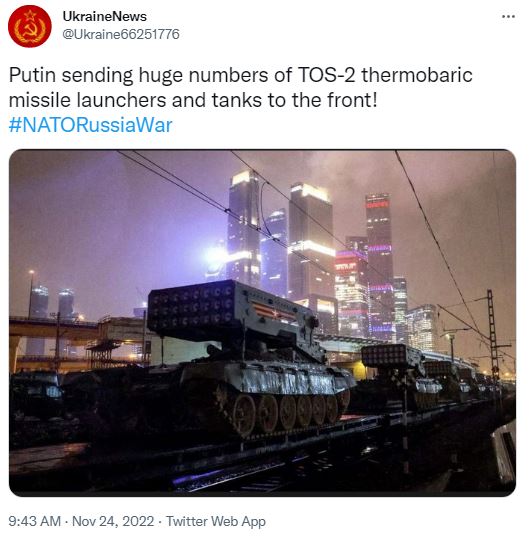 Unfortunately, the European parliament voted in favor of a non-binding resolution yesterday that declared Russia a “state sponsor of terrorism” which only serves to escalate tensions. If a ceasefire and a path to peace are not found before winter sets in and mud-season fields freeze east of the Dnieper River, the Russian military is gearing up for a military operation that will end the war or NATO’s proxy war may escalate with intervention beyond logistics, weapons, and humanitarian support. Only one path makes sense because a clash between U.S. and Russian forces could lead to the unthinkable: full-blown mutually-assured nuclear destruction (MAD).