A reputable source reported earlier today that “the long expected Russian winter offensive in Ukraine has begun.” If you expected the collective West to provide a breaking newsflash across an idiot box or dumbphone, consider the last few years of misinformation that “Twitter Files” exposed. It turns out that fascist legacy media conglomerates are in bed with fanatical alphabet agencies to censor the truth and maintain false government narratives. Then there’s a United States-NATO $100+ billion proxy war with Russia over Ukraine that’s gift-wrapped in 5th generation warfare (5GW) psyops. In line with new and breaking knowledge, a recent CBC broadcast is gaslighting the Canadian populace with claims that “stroke season” always follows flu season. That must explain the SADS phenomenon (Twitter thread) since early 2021 of an “unknown cause” that triggers excess sudden deaths on the fly, which has become the leading cause of death in jabbed Alberta.

The truth about the NATOstan-imposed meat grinder that’s butchered over 100k Ukrainian soldiers and multinational foreign legion mercenaries does occasionally manage to seep into mainstream media and destroy the Ukraine narrative.

“If they take Bakhmut, then that will open the door to Kramatorsk, Slavyansk, but it will also serve as a sort of killing ground for grinding up the Ukrainian forces… The Ukrainians are taking heavy loses, and “it’s a meat grinder.” – Former NATO Supreme Commander, Ret. U.S. General Wesley Clark on CNN, Nov. 2022

“European Union chief Ursula Von Der Leyen said that 100,000 Ukrainian soldiers had been killed so far in Russia’s war, but later deleted the original speech. She then posted a new clip that omitted the figure.” – Hindustan Times, Dec. 1

NATO Chief Voices Fear of War With Russia While US Greenlights Drone Strikes on Russian Territory… “NATO Secretary-General Jens Stoltenberg acknowledged a fear of something going ‘horribly wrong’ and leading to a hot war between the nuclear-armed alliance and Russia… NYT confirms US-backed Ukraine forces carried out their ‘most brazen attack’ yet, 300 miles into ‘the heart of Russia’” – Caitlin Johnstone, Dec. 12

Battle Lost for Ukraine… “The battle has been lost and the war has already been decided, said retired US Army Special Forces and Marines Colonel Richard Black… ‘I would just say to the Ukrainians be careful because if you think things have been bad until now, you will see something that is far beyond anything you have imagined so far” – WarNews 24/7 (Video), Dec. 19

Keep in mind that in December, former French President Francois Hollande, former German Chancellor Angela Merkel, former Ukrainian President Petro Poroshenko, and Zelensky publicly professed across various mainstream sources that the Minsk 1 and 2 Ceasefire Agreements signed in 2014 and 2015 were nothing but a ruse by Western leadership. The only intent was to buy time for NATO to arm Ukraine for a military conflict with Russia.

In late December, Zelensky’s road show to Washington D.C. prompted a response from the Kremlin. “Nothing good would come from Zelensky’s trip and Russia saw no chance of peace talks with Kyiv. Continued Western arms supplies to Ukraine would lead to a ‘deepening’ of the conflict – something which could backfire on Kyiv.”  Naturally, when a leader finds out that someone lied to his face while signing ceasefire agreements in good faith, that’s the end of the line. There were numerous red lines blatantly crossed by NATO in the past, but December’s events certainly solidified Putin’s decision to disengage from diplomacy and end restraint from launching Russia’s full military capabilities to end the war. I stand by my prediction from early last year that Russia might reach the east bank of the Dnieper River if peace is not negotiated or we nuke ourselves first.

“Russian Security Council Secretary Nikolay Patrushev said that events in Ukraine isn’t a war between Moscow and Kyiv. ‘It’s a military confrontation of NATO, first of all the U.S. and Britain, with Russia. Fearing a direct engagement, NATO instructors push Ukrainian men to certain death,’ he said. Patrushev went on to say that Russia is using the special military operation to ‘free its regions from occupation and must put an end to the West’s bloody experiment to destroy the fraternal people of Ukraine.’” – Tass, Jan. 2023

Medvedev: ‘The disgusting, fascist regime in Kyiv will end’… “The country will be completely demilitarized.” – WarNews 24/7, Dec. 27

Lindsey Graham Calls for US Tanks on the Ground in Ukraine – Wants All-Out War with Nuclear Russia… “Lindsey wants US tanks on the ground. They can’t get there quick enough. In 2021 the US surrendered to the Taliban in Afghanistan, armed their military with $80 billion in US weapons, and abandoned thousands of Americans and green card holders on the ground. No one was fired. Now Lindsey wants to use these same idiots to start a nuclear war with Russia. This guy is a psycho.” – Gateway Pundit, Jan. 7

The following excerpts and maps are a brief summation of the full report published at Moon of Alabama (MoA) today, which followed the fall of Soledar in mid-January. MoA is a source that’s proven to be prescient and accurate.

The long expected Russian offensive in Ukraine has begun… “The Ukrainian army, egged on by its U.S. controllers, had put most of its resource into the static defense of the Bakhmut (Artyomovsk) – Soledar sector of the eastern front. An insane number of Ukrainian brigades, though many partially depleted, were concentrated on that 50 kilometer long front. This left other sectors nearly empty of Ukrainian troops. The forces which are currently getting mauled in the Bakhmut area constitute 50% of Ukraine’s battle-ready forces… On the southern and northern sectors of the battle-line the Ukrainian forces have been thinned out and are only able to defend against minor forces. The big Ukrainian concentration in Bakhmut is now in an operational encirclement. The Russian forces have progressed north and south of the city and their artillery can easily control the western exit roads of Bakhmut. This a Verdun like situation (cauldron). Russian artillery is by far numerical superior and can slaughter the Ukrainian troops at will. Even the U.S. military is now suggesting that Ukraine should give up on that city. Should the government in Kiev agree to that it will be a retreat under fire with likely high casualties. Not retreating though will make things even worse. 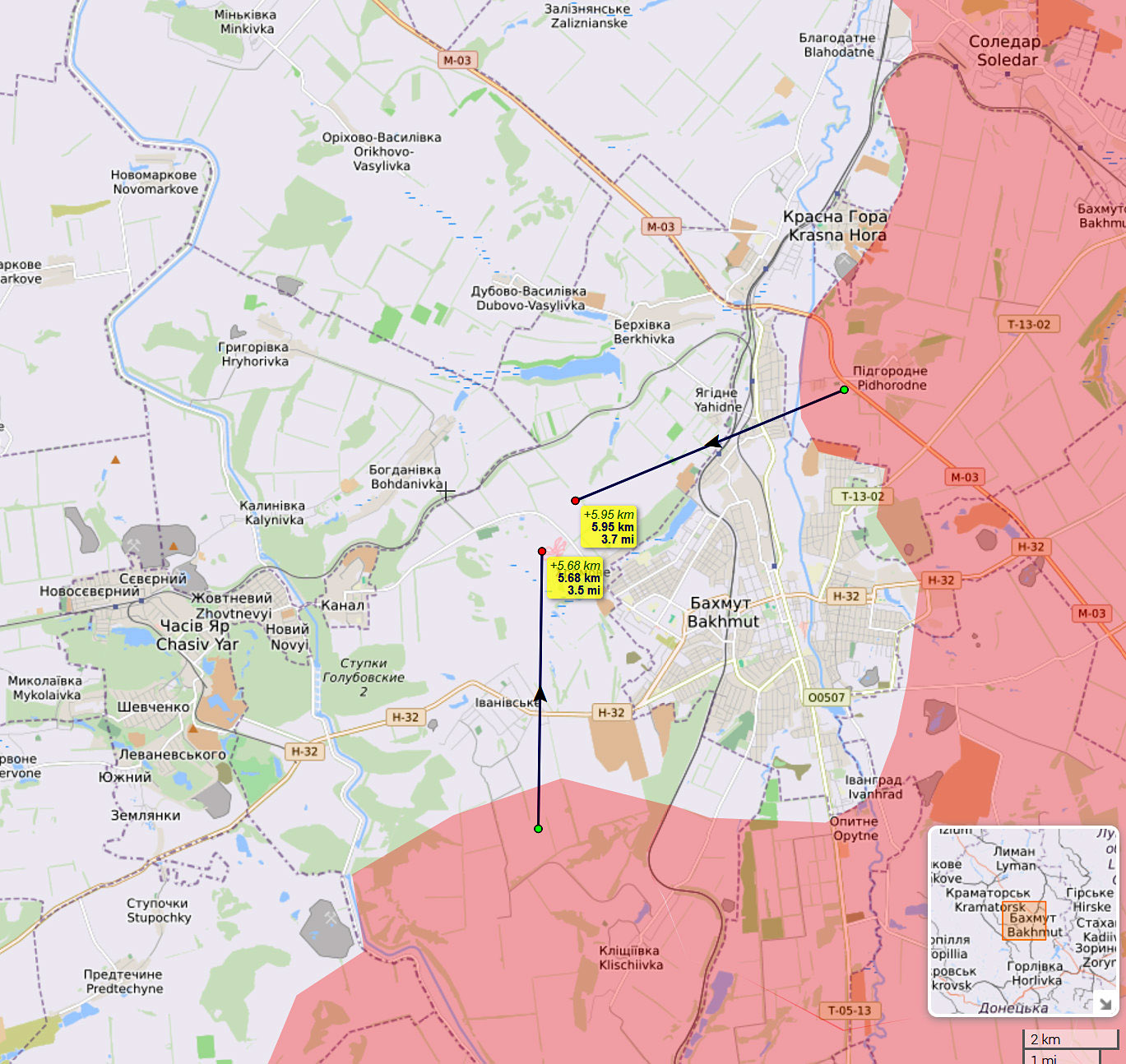 The Ukrainian concentration on Bakhmut put its other frontlines into jeopardy. I and others have suggested for quite some time that the Russian forces will use the southern Zaporizhia region for a large thrust into the far back of the Ukrainian forces around Bakhmut. The Russian moves against the third and fourth Ukrainian defense lines will likely be supported by a move from the south that will liberate the rest of the Zaporiziha and Donetsk oblast. Aside from those operations the Russian command has sufficient number of troops available to run another major attack. This could come from the north into the Kharkiv region behind the Ukrainian troops currently attacking the Russian lines further east. The Ukrainian 65th Mechanized Brigade is the only capable force in the area. It is screening Zaporizhzhia city but has been heavily bleeding it its position for quite a while. One Motorized Infantry brigade, the 56th, was added to the southern front some six days ago. Back in August this brigade had been severely mauled in its defense of Peski at the eastern front. It has since been reconstituted with new conscripts and a smorgasbord of ‘western’ delivered equipment. It cannot be regarded as a fully capable unit… There is no Ukrainian artillery brigade in the sector. There are thereby no counter-artillery capabilities available. The attacking Russian force is the 58th army of the Russian Federation… This is the real Russian army, the Red one, with all its heavy resources and capabilities to wage combined arms warfare. The first probing Russian attacks in the area were launched two days ago. The Ukrainian lines immediately broke down and the Russian forces advanced some 5 kilometer on the very first day. Yesterday they advanced further. Everything in red and yellow north of the closed red line are recent Russian advances. 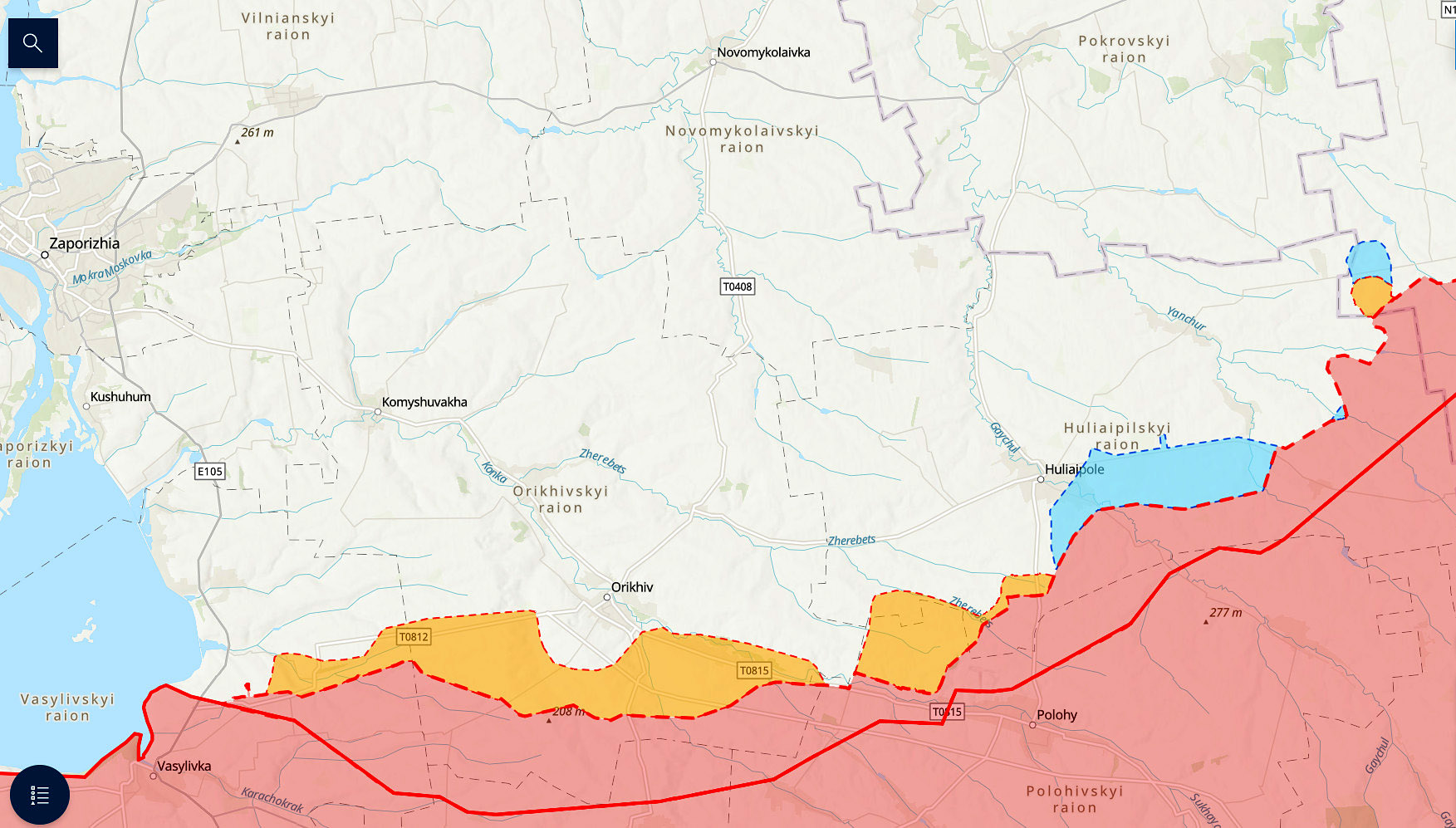 A few weeks ago, in an interview with the Economist, the Ukrainian army commander general Zaluzhny called a Russian attack at this time the ‘worst’ possible situation… It is unlikely that any reserves he currently has are equipped, trained and battle ready. They will be too small to stop a fully mechanized Russian attack through the rather sparsely settled southwest of Donetzk province. The aim of the Russian thrust in the south will not be to take cities like Zaporiziha. The aim is to bring the main transport routes, railways and roads, from west-Ukraine to the front in east Ukraine under Russian artillery fire. This will prevent not only the re-supply for the Ukrainian troops on the eastern front but also their exit from the front line. A 100 kilometer (60 miles) thrust to the north would mostly do that. A complementary thrust from the north towards south, which may or may not be coming, would finally close the cauldron.

There is much to read within the full reports noted above. It appears that the Russian winter offensive is on in the south, and Bakhmut is encircled while most American’s and Western press are clueless. This past week, Zelensky’s administration took a serious blow with the resignation of a key presidential adviser and death of the Interior Minister in a helicopter crash over Kyiv. Meanwhile, Putin has fortified Moscow with missile defense systems and placed PANTSIR-S air defenses on the rooftop of government buildings and the Ministry of Defense. 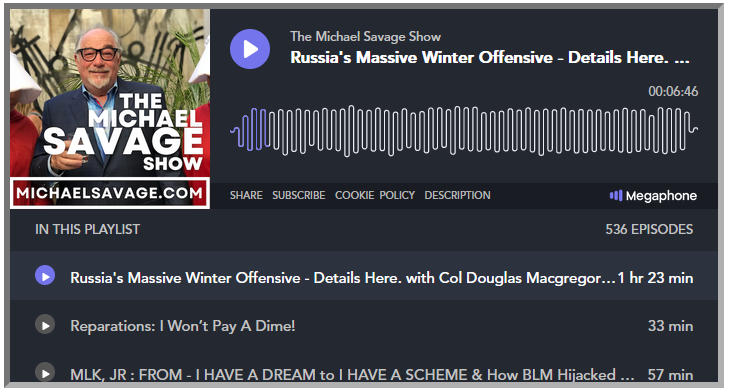