Trump Just Gave Up the 2020 Election

During the past two years, the Trump administration has garnered a reputation for unpredictability. Initially, the President’s supporters viewed this attribute as an asset, keeping progressive leftists on their feet. But increasingly, we’re witnessing how a maverick approach can erode into a liability. 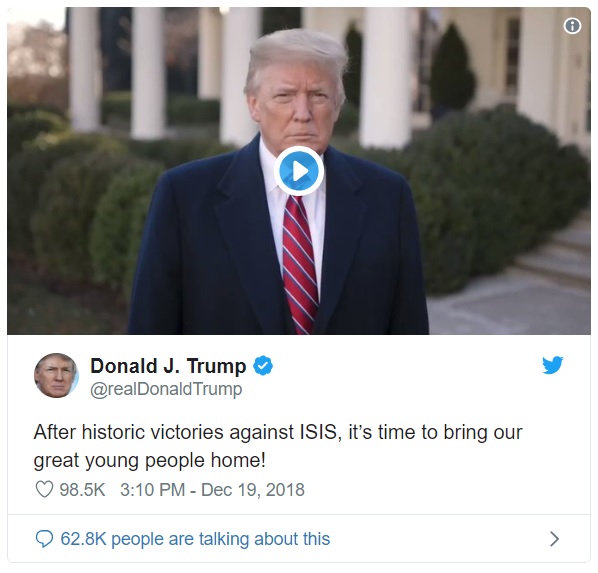 In a stunning tweet, President Trump announced that “After historic victories against ISIS, it’s time to bring our great young people home!” Undoubtedly, the new White House directive has impacted significant damage to the terrorist organization in Syria and elsewhere. Moreover, pulling out of Middle Eastern conflicts represents a fulfilled promise to put “America First.”

Those are fair points. However, we have a moral obligation to learn from our prior mistakes. Once involved in a conflict with extremists, we must finish the job. Trump’s announcement draws unfortunate parallels with former President George W. Bush’s gaffes. Specifically, I’m referring to the “Mission Accomplished” declaration that eventually became a meme for myopic policies.

Even worse, it’s not the American public that was most caught off-guard, but rather, members of the administration. I think it’s quite telling that the State Department abruptly cancelled its daily briefing when Trump made his announcement.

Throughout the alternative media and the right-leaning blogosphere, supporters cheered President Trump. In their view, staying in Syria and the Middle East serves no one except the banking elite.

We’ve heard the mantra that “all wars are bankers’ wars.” Under this context, every nation should look after their own interests. And in principle, I agree…so long as everyone abides by these rules.

However, we don’t live in a world of fairness and integrity. As you can see when you flip on the news, evil exists. Not only that, it is rapidly proliferating. Why then should we grant foreign governments unwarranted exemptions?

I have another adage for those who don’t understand foreign policy: absolute power corrupts absolutely. Pulling out of Syria is not about putting America first. Instead, we are placing America second as other nations – in this case, Russia – slot into the global influencer’s role.

Unfortunately, this latest move from the Trump administration doesn’t reflect leading from strength. We are absurdly cowing to the Russians, who are replacing us as the beacon of light.

What’s even more bizarre is that this announcement hasn’t generated near-universal criticism. “America First” means projecting strength so that communists or rogue states don’t think about messing with us. What we have with the Trump administration, though, is an acquiescent strategy.

This does not sit well with either Democrats or Republicans at a time when the President can’t afford a misstep. I’m afraid this time, it will cost him.