“I was born for a storm, and a calm does not suit me”

“There are no necessary evils in government. Its evils exist only in its abuses”

“The bank, Mr. Van Buren, is trying to kill me. But I will kill it”

“You are a den of vipers. I intend to rout you out and by the Eternal God, I will rout you out”

After his second term as president, Jackson retired to the Hermitage (known as “the home of the people’s president”) in Nashville, TN, to live out his final days on Earth. When asked what his most important accomplishment had been, his reply was “I killed the bank.” 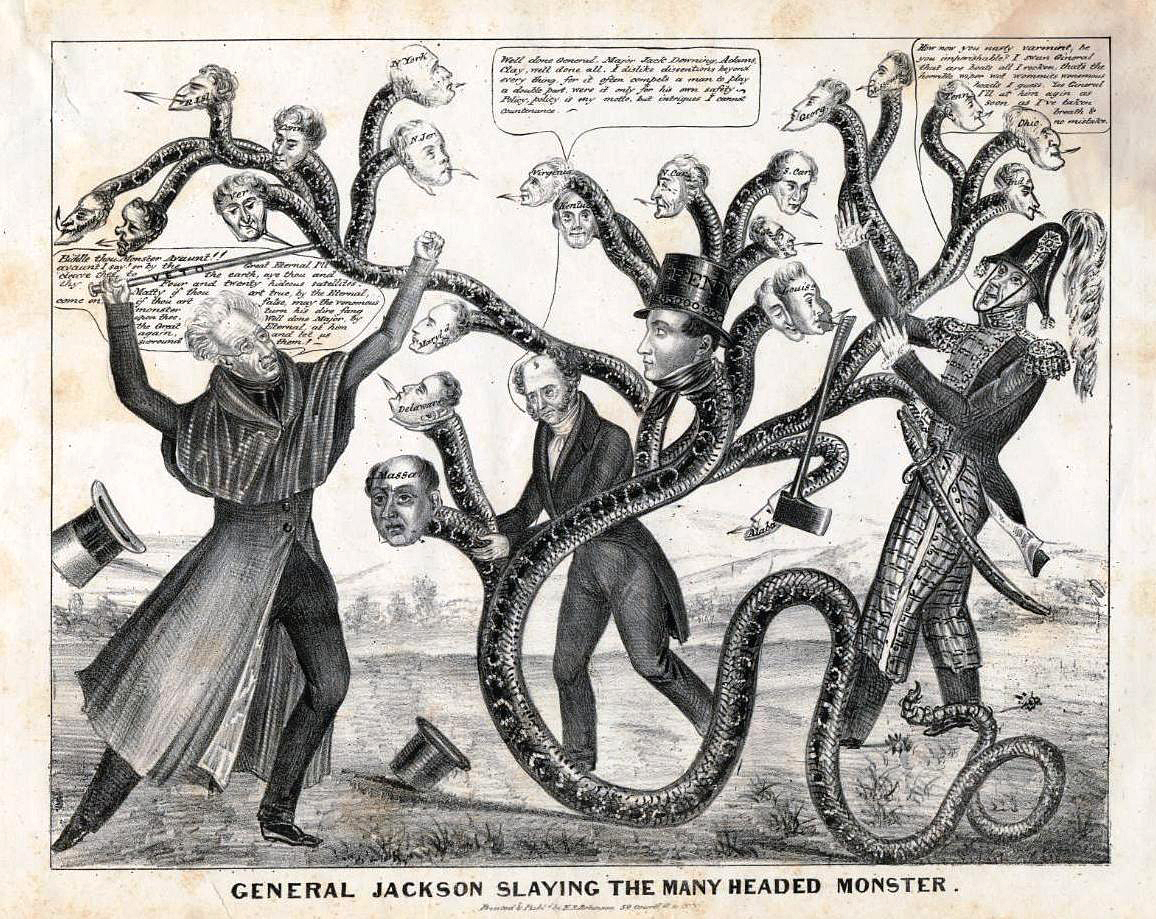 General Jackson Slaying The Many Headed Monster by H.R. Robinson, 1836

When the doors shuttered at the Second Bank of the United States in 1836, the U.S. functioned with no central bank, considered by many analysts to be the most prosperous time the nation experienced, in concert with the first and second industrial revolutions, until the Federal Reserve Bank was chartered on Dec. 23, 1913. Jackson killed the bank so definitively that it took 77 years for “The Money Changers” to take a secretly conceived institution formulated on Jekyll Island and ram it through a congressional holiday session.

Kudlow Bucks Tradition in Urging Fed to Hike Rates ‘Very Slowly’… “’I speak to Jay Powell periodically and he’s a good man,’ said Kudlow, who has recently recovered from a mild heart attack. ‘My hope is they understand that and they will move very slowly.’ A Fed spokesman declined to comment.” – Bloomberg, Jun. 29

Trump says he’s ‘not thrilled’ with the Fed’s rate hikes… “’I’m not happy about it, but at the same time, I’m letting them do what they feel is best,’ he added. Trump, though, suggested that he sees the Fed’s management of monetary policy as at odds with his attempts to boost the economy by renegotiating trade terms with China and other countries. ‘I don’t like all of this work that we’re putting into the economy, and then I see rates going up,’ he said. Trump has commented on the Fed’s affairs before, drawing criticism from Fed watchers who value the tradition of the administration leaving monetary policy to the independent central bank. Nevertheless, Trump added that he was saying the same thing he would say as a private citizen. He also said that Fed chairman Jerome Powell is ‘a very good man.’” – Washington Examiner, Jul. 19

Exclusive: Trump demands Fed help on economy, complains about interest rate rises… “The president spooked investors in July when he criticized the U.S. central bank over tightening monetary policy… Trump, who criticized the Fed when he was a candidate, said other countries benefited from their central banks’ moves during tough trade talks, but the United States was not getting support from the Fed. ‘We’re negotiating very powerfully and strongly with other nations. We’re going to win. But during this period of time I should be given some help by the Fed. The other countries are accommodated,’ Trump said.” – Reuters, Aug. 20

Trump Complains Powell Hasn’t Been Cheap-Money Fed Chair… “President Donald Trump said he expected Jerome Powell to be a cheap-money Fed chairman and lamented to wealthy Republican donors at a Hamptons fundraiser on Friday that his nominee instead had raised interest rates, according to three people present.” – Bloomberg, Aug. 20

Adding insult to injury, the POTUS laments, “the Fed has gone crazy” on Oct. 10 as the DJIA plunged 800+ points, the blue-chip average’s largest plunge since February.

POTUS: My biggest threat is the Fed… “There are checks and balances set in place that would not allow the President to fire Jay Powell. Because of what Trump has done, if the Fed were to back off rate hikes in Dec they would appear to be kowtowing.” – Danielle DiMartino Booth of Quill Intelligence on Yahoo Finance, Oct. 17

Powell’s most recent presser was held on Sep. 26 after the September FOMC meeting where another .25% interest rate punt was added to the ticker. In response to journo questioning, he said that the Fed would react to a market correction if it was “significant” and “lasting.” Spoken like a good politician, leaving any interpretation to the financial punditry.

Obviously, the POTUS and his financial advisors are not pleased with a Fed chair that appears to be bucking a message and negatively affecting the administration’s economic agenda, which brings us to the question of whether or not a Fed chair can be fired. The short answer is yes, due to a vague, eight-word phrase found within Section 10 of the Federal Reserve Act, “unless sooner removed for cause by the president.” Throughout all amendments to the act, that particular phrase never changed. The act does not define what the word “cause” would entail, and it seems Congress clearly thought the POTUS should be able to remove board members before their terms expire, under certain conditions. 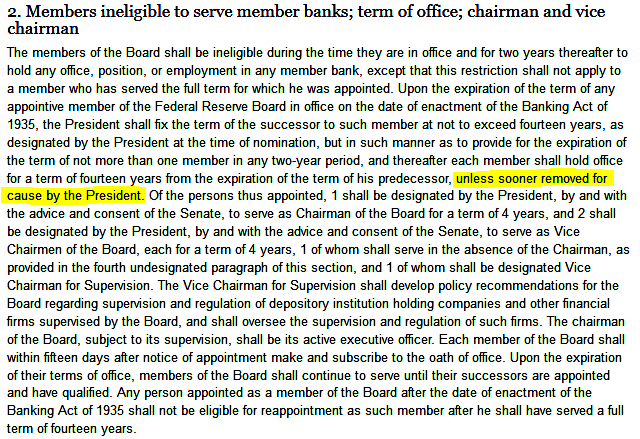 If you want to read the original act prior to any of the amendments, enjoy the following links. The NYT article is interesting as well, with the headliner “Affixes His Signature at 6:02pm, Using Four Gold Pens.”

Here is a little political trivia from Dec. 23, 1913, found within the original act. All of the Senate Democrats voted yes for the Fed and three Republicans joined in. The remaining Republicans voted no. 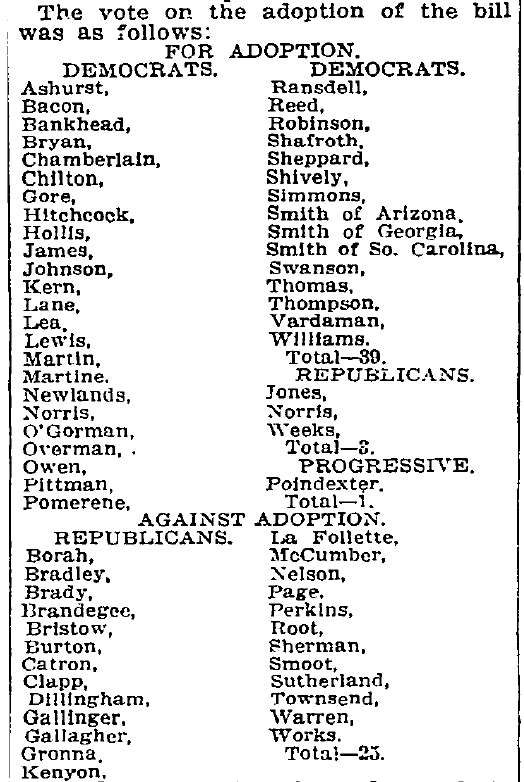 Buried within the Federal Reserve Bank’s website, I found the following under the heading “about the Fed.” Not sure where the authorization exists for a “cannot be removed” rule, and perhaps this only applies to the internal policy at the Fed.

“Once appointed, Governors may not be removed from office for their policy views. The lengthy terms and staggered appointments are intended to contribute to the insulation of the Board–and the Federal Reserve System as a whole–from day-to-day political pressures to which it might otherwise be subject.”

“The Reform Act required Reserve Bank directors to represent the interests of ‘agriculture, commerce, industry, services, labor, and consumers.’ This expanded on the original Federal Reserve Act of 1913, which had only mentioned representation of agricultural, commercial, and industrial interests.”

We are dealing with a lot of legal vagueness, and a kneejerk move made by a POTUS could easily end up in endless litigation and the Supreme Court. Best have your ducks in order before taking on any political fallout that may result with such a drastic measure. Even with clean reasoning, it could still end up down the litigation road, and new nominees still require a Senate confirmation. As long as Capital Hill retains the Republican majority after midterm elections in November, the odds to pull it off improve.

One way to fire a Fed chair is through personal or legal issues that arise, but that is a hopeful waiting game without results. The other argument would fall into a category of FOMC policy decisions vs. individual views. An example is if it can be reasonably argued that rate hikes and a strengthening dollar do not represent interests in agriculture, commerce (i.e. crashing stock market), industry (corporate debt defaults due to higher interest rates), services, labor, or consumers (i.e. falling demand and rising defaults on debt due to higher interest), as these are detrimental to the administration’s agenda and economic recovery. Setting up the Fed as the fall guy if the economy suddenly takes a severe turn appears to be the only viable option, and the current rhetoric may be the way to “precedent” a decision to remove the Fed chair if and when a severe downturn manifests. 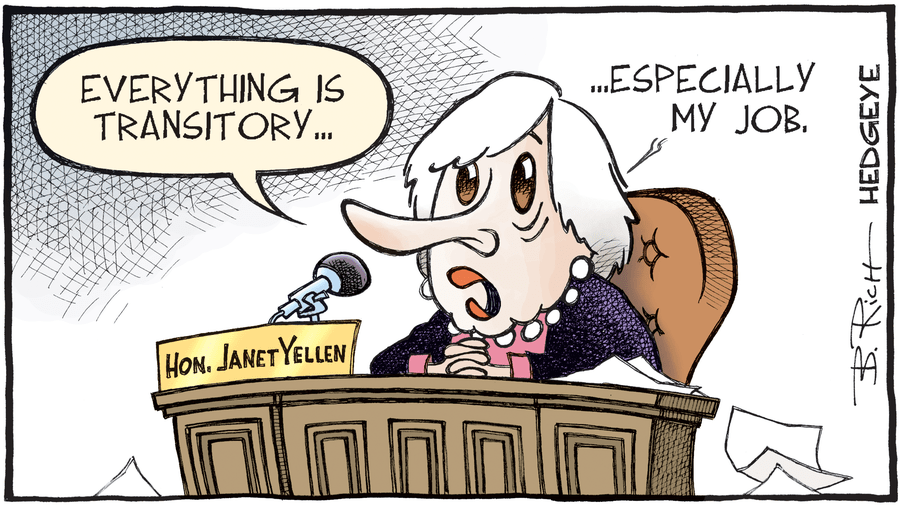 Here is the recent full interview on Fox Business. Fast-forward to the 25:30 timestamp for the POTUS’ comments on Fed policy decisions.

“My biggest threat is the Fed because the Fed is raising rates too fast… Obama was working off of ZIRP, I’m working off Real Interest Rates, almost normalized, that’s a big difference and my numbers are much better. You can’t compare it.” – POTUS, Oct. 16

If you find yourself caught up in a dogfight about whether or not previous presidents violated the so-called political and policy independence of the Fed, this article should assuage you from false presumptions.

The Idea That the Fed Is ‘Independent’ Is Absurd… “It may be unusual for a president to openly voice such criticism, but it wouldn’t be the first time one has pressured the Federal Reserve for short-term political gain.” – The Fiscal Times, Aug. 30 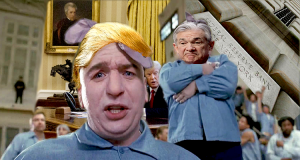