To no one’s surprise, the job approval ratings for President Trump have gone from bad to worse. Following one of the most — if not the most — vitriolic elections in modern American history, bad blood was guaranteed to fester. Ironically, the only thing that this divided nation can agree on is that any choice would have met with intense opposition.

Still, President Trump does not appear to take this dynamic in stride. Instead, the Commander-in-Chief has taken to Twitter to blast recent job approval ratings as “fake news.” Rather than labeling the liberal opposition as sore losers or snowflakes, President Trump is apparently focusing on the integrity of the mainstream news media.

This is likely due to the fact that any conflict immediately after a general election is natural. However, by the time that reality has sunk in, the job approval ratings should improve. Instead, President Trump has experienced a steady decline. According to research led by ABC News, Trump’s first 100 days in office has the lowest job approval figure of any President since they kept records on this metric.

Despite the former real estate mogul’s larger-than-life persona, that has got to hurt personally. On a political and professional level, President Trump is proud of his outsider street credibility. He loudly and boldly promised to bring Americans together. The presidential approval ratings show otherwise; hence, his reactionary attack of the polls as fake news.

While I wouldn’t go so far as to say the job approval ratings are rigged, we do have to take these numbers in context. First, President Trump won solely through the Electoral College — he did not carry the popular vote. This is because the popular vote rewards purely on the basis of nominal strength. Thus, California and New York, with their rabid pro-Third World immigration policies and educational indoctrination programs, will carry essentially skewed and biased leverage.

We can only expect opinion polls to be swayed just like the so-called popular vote. 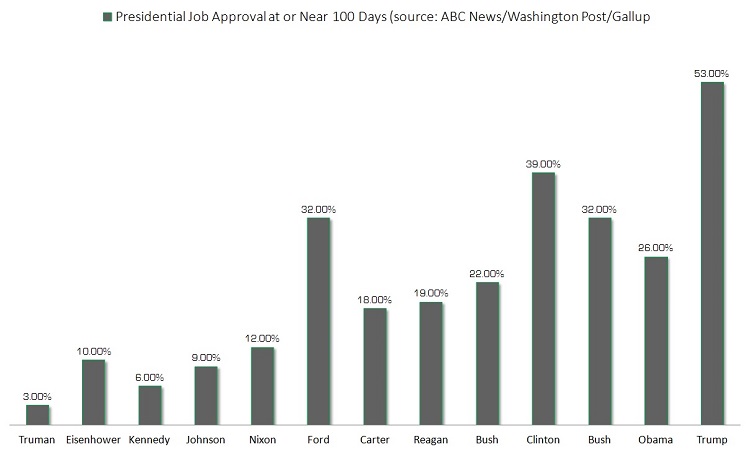 But the more critical point is the rising trend of discontentment with Washington politics. The American people have consistently grown dissatisfied with their leadership since the end of World War II. This dynamic is extremely convoluted, having as much to do with generational shifts as economic and geopolitical currents. And many more points exist beyond those broad brush strokes.

The bottom line here is that President Trump and his negative job approval ratings are not a reflection of the man, nor his policies. Rather, they are emblematic of the crisis we face in this country, that the government no longer represents the people. It is to this end that Trump was elected.

In order to get a true read of his administration, we must provide President Trump with a modicum of time. Three months and a week is simply not going to cut it.