Despite his many misgivings, one of the core reasons why the American electorate decided to vote for then-candidate Donald Trump was his business credentials. Unlike so many career politicians, Trump actually created jobs – not just talk about them. But with the U.S. Dollar Index pointing to further troubles ahead, we now fully realize that no one person can fix our economy.

In all fairness, President Trump shouldn’t take the blame if a future economic crisis occurs during his administration. And no, I’m not one of those people to blame former President Obama either. Rather, I hold the Federal Reserve responsible as they determine our monetary policy. In addition, the Fed has consistently pushed a Keynesian model of monetary control, which is being proven impotent as I speak.

We see this ineffectiveness in the long-term chart of the dollar index, below: 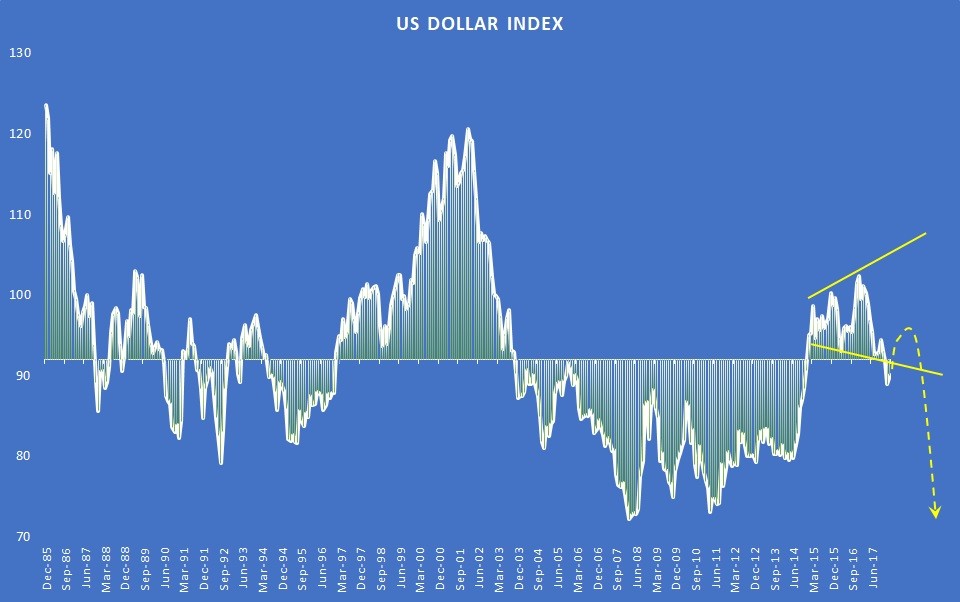 I argue that this market consolidation is actually a broadening wedge pattern, or sometimes known as a “megaphone pattern” in technical analysis circles. Think of a bullish pennant formation in reverse: rather than price action funneling into an apex point and breaking out, the broadening wedge pattern starts from the apex point and funnels outward, eventually breaking down.

To where will the dollar index break down? The logical support line is where all-time lows are located, somewhere around 66 points. This is the point zone that was hit leading up to the 2008 economic crisis, and then during the immediate aftermath.

Indeed, it took quite a while for the dollar index to push past the 80 point resistance barrier, and this was only possible because of the Federal Reserve and its quantitative easing program. But have we truly addressed the economic crisis that led to our currency tanking? Objective, reasonable analysts will say no, and that suggests another decline in the dollar index could set off a second major economic crisis in a little over ten years.

Granted, we’ve seen multiple indicators of an impending slowdown, and so far, bearish prognosticators have been proven wrong. Also, the gold (and silver) price is not acting in the way that it should, as a traditional safe-haven asset and risk-hedging vehicle.

But like anything, free market manipulation is only temporarily effective. Ultimately, the fundamentals will take over, and that doesn’t bode well for mainstream analysts hoping to avoid an economic crisis.

I’m not sure when it’s going to occur, but the warning signs are extremely difficult to ignore. The dollar index tells us that we’re staring into the barrel of a gun belonging to a shooter with an itchy trigger finger.