In a recent talk with the National Economist’s Club, Janet Yellen discussed the state of the economy. Janet Yellen, the Federal Reserve Chair, recently stated that we will not have a financial crisis in our lifetime. I find this comical, asinine, and reckless. I mean, everything is great: the stock market is at all- time highs, the bond market yields are completely normal, and the global debt-to-GDP ratio is 40%. Well, we know that these market disturbances are completely out of touch with reality. Nationalist movements across the globe and citizenry alike are tired of the Keynesian debt experiment where we’re all the guinea pigs. When she and her counterparts continue to get their forecasts wrong, why should we even listen to them anymore? Or are they intentionally exhibiting cognitive dissonance? Is this cognitive dissonance a tool to keep propping up markets for the transition to the new blockchain system? I would suspect there is a method to the madness, but not entirely.

In this meeting, Yellen discussed the likelihood of returning to the unconventional monetary policy that was used during the financial crisis. What this means is that to keep asset prices at exorbitant levels, the Fed will need to cut interest rates much faster than anyone thinks, and they will need to introduce QE4 (Quantitative Easing 4). QE4 will keep the liquidity in the system, but more inflation will come as well. I’ve had this conversation with a Federal Open Market Committee advisor. This conversation took place in 2015, and he looked at me like I was nuts. He was adamant about dot plots and interest rates rising as expected. He did say that it can take an exceptionally long time for this to occur. It looks like an economics graduate who doesn’t live in a bubble has the upper hand over a Ph.D. economist in Washington. The level of normalization will not move ahead at the rate they project. A unicorn exists at the Fed, called the Phillips curve. Neither are real, and the correlations between unemployment and inflation are also fake. Yellen also stated that the “inflation adjusted rate that is consistent with the economy expanding at its full potential without overheating is much lower than in previous decades.” The Fed generally uses the Core Personal Consumption Expenditure as a gauge for inflation, and it has been going down for months. 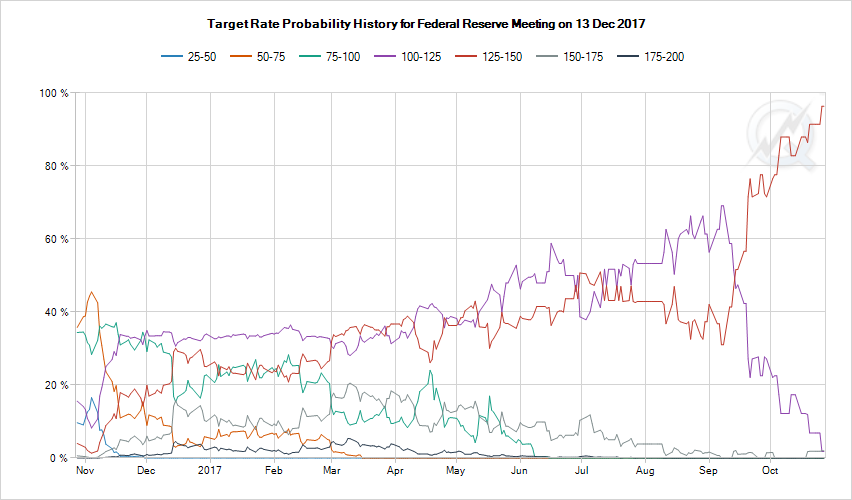 Unconventional monetary policy is definitely coming, and faster than most anticipate. Yellen was giving fair warning, as even she realized that her data is not as accurate as she believed. Currently, the Fed Funds futures place a 97.8% chance of interest rates being 125-150bps in December. I suspect that as we get closer to December, the PCE deflator will stop the Fed in their tracks and this rate will drop much lower. I do not see the Fed raising interest rates in December, and if they do, it is only to save face.