By now, most of you have heard the story of United Airlines passenger, Dr. David Dao, who was forcibly removed after having boarded his flight. He, along with three other passengers, were selected at random to disembark the flight in order to make room for UA employees. The other three begrudgingly complied, while the doctor obviously did not.

In the wake of the viral story, an enormous amount of misinformation has circulated throughout the internet and social media. Perhaps the most disturbing example of misdirection is the assertion that the United Airlines flight was “overbooked.” In reality, the plane was “fully booked.” The only reason why UA decided to remove the four passengers was for the sake of the company’s employees.

Shortly after the incident came to light, United Airlines’ Hispanic CEO Oscar Munoz issued an apology for having to “reaccommodate” the four passengers. Later, Mr. Munoz sent out a letter to employees, blaming Dr. Dao for “raising his voice” and being “disruptive,” implying that the doctor somehow deserved to be roughed up. When UA shares slipped on Tuesday under extremely heavy volume, Munoz changed his tune dramatically, offering a full apology.

A host of sins were committed in this incident. First and foremost, however, I would like to squarely address mainstream media hypocrisy. At least two media outlets — Inside Edition and Fortune — described the race or ethnicity of Dr. Dao. The former mentioned that he was a “Vietnamese-American,” while the latter stated that the doctor “appeared to be Asian.” 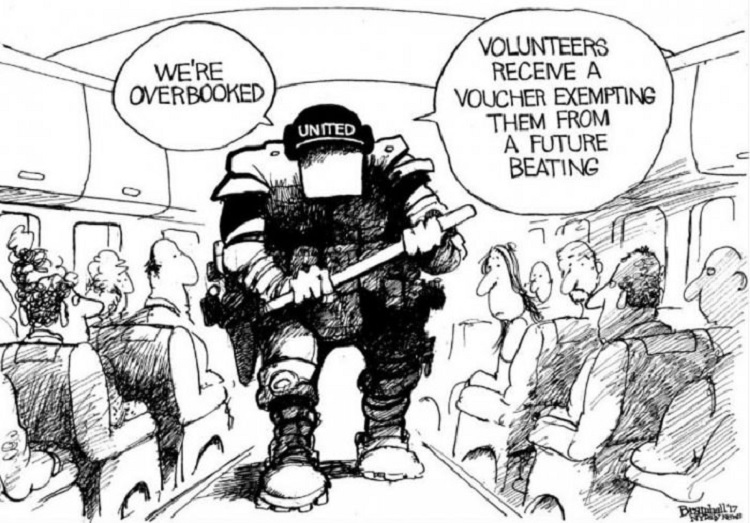 I’m okay with that, but only if this is a case of genuine racism. If not, it is inappropriate to mention the race of an individual when it is: a) irrelevant and b) signaling out specific races, but giving out “passes” for others.

This is the reason why I mentioned that Oscar Munoz is a “Hispanic CEO.” In fact, since the mainstream media is in the business of identifying the race of the victim (if the victim is Asian), then we need to identify the races and ethnicities of ALL the parties involved.

That begins with the crooked “airport security officer” who beat the “Asian doctor” unconscious. Why is the mainstream media not mentioning his ethnic or racial background? Is the officer a “black officer” or “Hispanic officer?” More than likely, that is the case. If the officer in question was white, the media would be crying bloody racism.

As it turns out, the real racists are the liberal mainstream media. While imploring Americans — white Americans specifically — to be colorblind, they themselves have no problem signaling out Asian foreigners or Asian refugees. And it’s painfully clear that the mainstream has their favorite “pet races” or ethnicities.

Otherwise, in addition to the Asian doctor, the Hispanic CEO of UA would have been called out.