Wall Street knows that the jig is up. Why else would they ignore bitcoin’s meteoric rise, save for a few token mentions? The ability to generate alpha in the paper equity markets is downright sad. At about 9% year-to-date, benchmark indices will do a little better than beating real inflation rates. But if the markets collapse like they did in 2008, it’s game over.

In contrast, many, if not most, cryptocurrency assets are making multiple double-digit gains, some seemingly on a daily basis. Take ethereum as a prime example. With a market capitalization of $36.5 billion, the number-two ranked cryptocurrency is within 17% of reaching bitcoin’s market cap of $43.5 billion. Within a matter of days, it has soared from $260 to over $400. To think that in January, ethereum was trading in the single digits!

Perhaps the mainstream doesn’t want to draw attention to bitcoin and the cryptocurrency markets, and for good reason. Why celebrate profitability of 30% or 40%, when you can rejoice over 400%, often in a much shorter time frame? We can appreciate why the media censures certain information, but here’s the problem for them — no matter what they do, there’s simply no stopping the cryptocurrency revolution!

While paper equity bulls arrogantly proclaim record price levels in the broader indices, what they don’t admit — or realize — is that the rally has occurred under fewer and fewer volume levels. Indeed, this is one of the classic warning signs from technical analysis. You never gamble too richly into a market where the volume doesn’t confirm the rally. 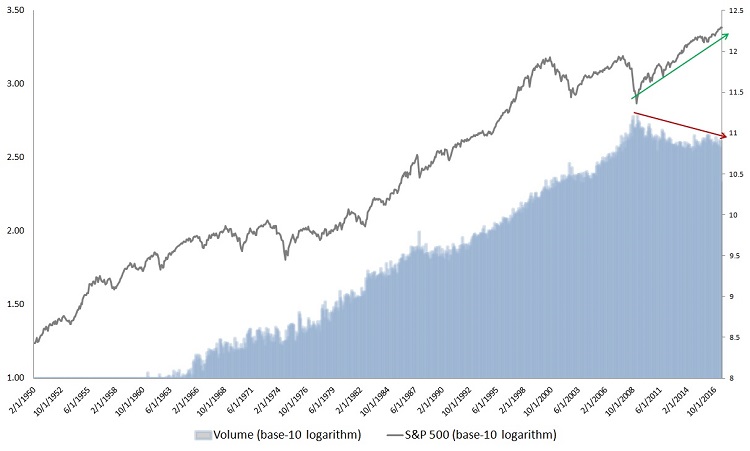 In other words, the price increase is based largely on speculation — the concept that someone else will be stupid enough to hold the bag. But when there are not enough stupid people, everyone suddenly recognizes that the markets are overcooked. People panic, and sell out of their positions, often at any price. This creates the extreme magnitude of volatility seen during 2008 or the crash of 1929.

Higher volume aligning with higher prices doesn’t necessarily guarantee that the rally will sustain itself. However, it provides confidence that more people are engaged with the bull market, and that the underlying demand is built upon solid, substantive fundamentals.

Of course, that’s not what we’re seeing here. When you look at the S&P 500 or the Dow Jones Industrial Average, the price is at unprecedented peaks, while volume is down to levels not seen since the mid-2000s.

Where is all the once robust volume heading? Interestingly, Business Insider once wrote an article frankly entitled “Millennials don’t trust the stock market.” This was published back in 2015, yet recent publications continue to lambast the younger generation’s pensiveness for the stock market.

A few years ago, I read an article that claimed that if all the 401k accounts were cashed out, it could wipe out our national debt. At the time, the debt was flirting with $17 trillion. By logical deduction, at any one moment in time, the Dow Jones and other benchmark indices represent trillions of dollars of wealth. 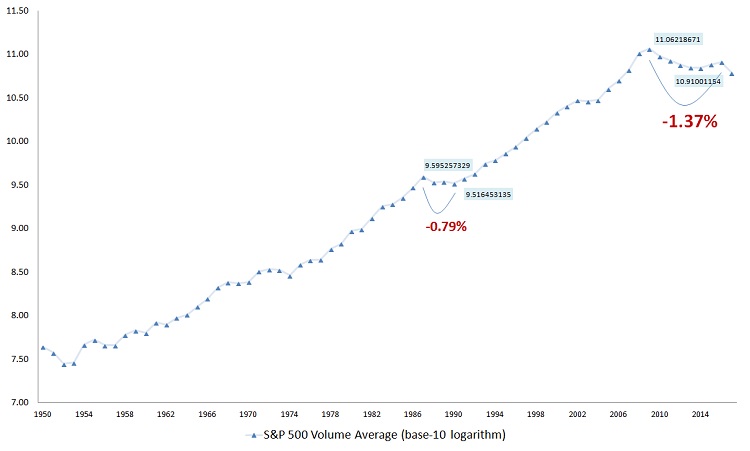 Since we are in the midst of the greatest exodus out of the stock market, trillions of dollars need to find a home. Presently, a vast sum of money is outside the markets, but it will eventually come back in. The question is, which type of market will it be?

The mainstream is gambling on a paper equity renaissance. The more astute investor sees a changing of the tide. Bitcoin, ethereum, and other cryptocurrency coins have proven themselves time and time again. More importantly, their underlying blockchain technology forms the basis for future innovations.

The Dow Jones represent the old and antiquated. Blockchain represents progress, innovation, and an open-source platform. I genuinely believe that bitcoin will mop-up the doubters — of which there are millions — sending the king of cryptos to astounding heights.