The markets can stay irrational longer than you can stay solvent. This is a lesson that’s drilled into every investor, and it is even more relevant today. With so many variables and uncertainties around us, a future economic crisis seems inevitable. Yet we also know that the investment sector has its own logic.

As such, I don’t want to make any overt recommendations or suggest any actions with this article; rather, I simply want to present information that I found analyzing the bond market; specifically, the variance in Treasury yield between the 10-year and 30-year notes. The difference in “payout” between the two notes is becoming so minimal that it potentially signifies a future dilemma.

Strangely enough, this variance was particularly conspicuous in the run-up towards the 2016 general election. As soon as Trump was shockingly declared the winner, the spread between the 10-year and 30-year Treasury yield tanked. After trading sideways throughout most of his administration, the Treasury yield ratio sank again in September, and has currently fallen to multi-year record lows.

What exactly does this unusual dynamic in the bond market mean? In theory, holding a 30-year note to maturity carries more risk than a 10-year note due to the additional time the investment is held. To compensate this risk, the Treasury yield on the 30-year note is substantially higher than the 10-year note (for the reason that the 10-year is a shorter term to maturity).

But if the Treasury yield difference between the two notes becomes smaller, it signals that the premium for holding additional risk also becomes smaller. At a certain point, if the trend is not ameliorated, the payout for both notes approaches a 1:1 ratio, even though one is considerably riskier than the other. Such bond market variances are rare in developed nations, but they do occur from time to time. 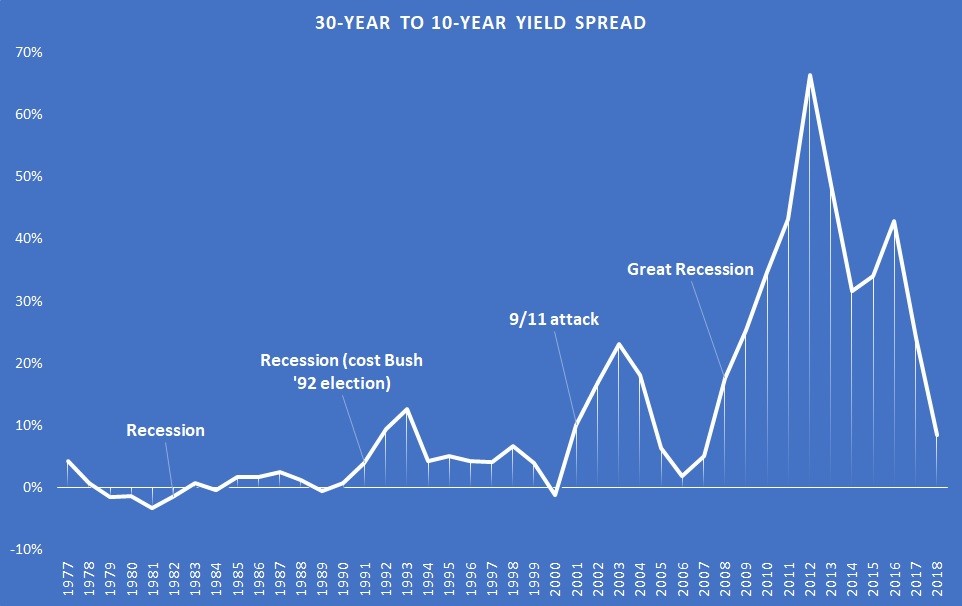 Interestingly, over the last several decades, tightening spreads in the U.S. bond market has occurred near recessions or an economic crisis. For instance, the 30-year to 10-year Treasury yield ratio went negative in 2000, meaning holding the riskier 30-year note resulted in a lesser payout! This was during the internet bubble bursting, and a year before the horrific 9/11 attack.

In 2006, the bond market sent another message when the Treasury yield spread dropped to 1.9%. About two years later, the global economic crisis occurred, followed by the Great Recession.

What makes the current freefall in the bond market alarming is its incredible scale. In 2012, the spread was an awe-striking 66.4%. So far this year, it’s averaging a mere 8.5%, or an indescribably steep 87% loss in less than six years.

This tells me that should history repeat or resemble itself, we could see a future economic crisis, perhaps inside a few years. Of course, this bond market pattern isn’t guaranteed to signal anything. However, with all that’s going on right now, I sincerely believe it pays to be vigilant.