Trump is reacting to what he called a “horrible attack,” the chemical poisoning of Syrian civilians near Damascus that will be met “forcefully.” He means full force, to be specific, and with the abundance of an additional $700 billion allocated towards the military, the future is certainly unknown.

The United States could be set to launch air strikes against Syria at a moment’s notice, with a Tomahawk-armed destroyer already in place.

“The USS Donald Cook, a destroyer armed with Tomahawk cruise missiles, has arrived off the coast of Syria, and is being harassed by low-flying Russian fighter jets,” tweeted Jacob Wohl, citing Turkish media reports.

In an era where stocks went up in unison, uncertainty across the board continues to escalate. As I’ve covered here at CrushTheStreet.com, with the shaky fundamentals and the underlying cracks breaking through, this attack on Syria could be another black swan event that continues to release the air from the everything bubble that is waiting to burst.

If we start seeing bombs go off in Syria, which could lead to further tension with Russia and China, on top of the most recent trade war and tech stock fears, stocks could be in for a massive correction and gold could be poised for growth.

Can our economy even really take the possibility of another war?

As it stands, the U.S. is still fighting the war in Afghanistan. It started in 2001 and continues today, which is going on to be the longest U.S. war in history. It has drained our economy, with virtually nothing to show for the years of effort.

Dismal economics tell me that we should focus our efforts locally in our own yard before we try to meddle in someone else’s business. Take a look at the money velocity, which has been collapsing for the past 20 years: 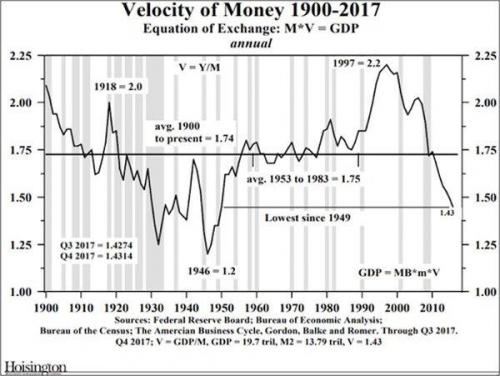 Does this look like an economy ready to endure more nonproductive spending?

This is something that concerns us here at Crush The Street in regards to the economy, and it flashes blatant red flags for economic troubles ahead.

In the End, Inflation Only Perpetuates

Inflation has become an accepted evil in the world of conventional economics, and we always think about it in terms of the cost of a cup of coffee or produce at the grocery store.

Consider the purchasing power of economic output for a moment. GDP growth for every dollar of debt has consistently collapsed for decades. It’s only getting worse, and the more economic drugs the economy takes, the higher doses it needs to get a jolt: 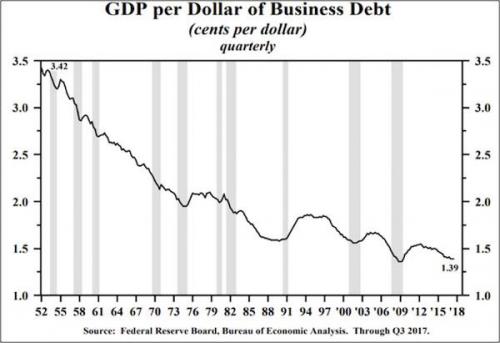 This is the first year in history that debt will likely break through $2 trillion nominal figures. Specifically, it will be starting in the $20 trillion range, going through $21 trillion and making it all the way into $22 trillion in one calendar year.

It is such a shame that our president passed something as historical, ethical, and fundamentally sound as the epic tax cuts but then doesn’t massively cut spending. And it’s because of this roller coaster coming off the tracks that this will ultimately not end well.

The Rules of the Game are Changing

I want to point out that earning consistent conventional income through the form of a traditional job or career might just get more difficult as the economic mess continues to unravel. Accumulating your savings will have to be more strategic and thoughtful than ever.

When it’s all said and done, over the long haul, dollar devaluation is inevitable. You need to understand that wealthy people own assets, and I’ve just read some bullish news over a longer-term horizon that signify further declines in our currencies and positive signs for assets, which is that the world’s top 1% will control almost two-thirds of the global wealth by 2030. As it stands, the top 1% own 50% of all household wealth in the world, according to Credit Suisse.

Sitting back and whining about the 1% getting richer while the same politicians who say they are for the working class cheerlead money printing that continues to enrich the 1% and crushes the middle class is not where you want to be. Do not be a victim of the times.

Be proactive, not reactive. Find out what the 1% are doing and mimic their habits for your life. Black swans are landing more regularly, and as momentum picks up, you’ll want to make sure your game plan is already in place.