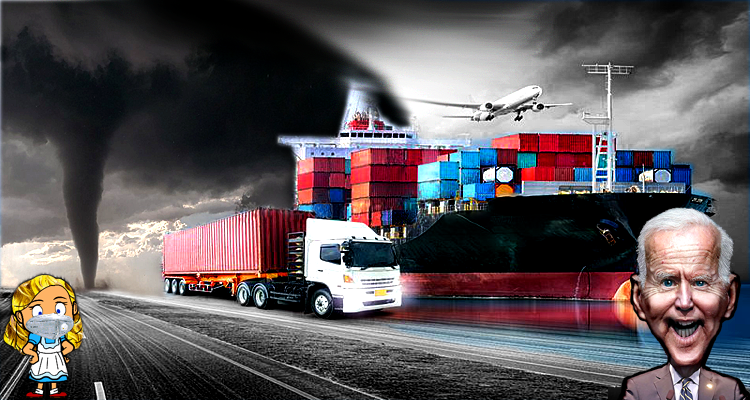 The supply chain crisis came home to roost in New England yesterday with my car’s yearly registration inspection and a trip to the local grocery chain to top off my fall/winter food pantry. Before I share that story and a few mainstream headlines, consider a review of the previous installment on the topic at hand.

Shipping and Supply Chain Crisis Will Not End Anytime Soon … “The extensive global network of shipping ports, containers, transnational vessels, rail freight, and trucking that transports the supply chain of commodities and finished products around the world is in a scrambled mess. While bottlenecks remain and the cost of shipping keeps skyrocketing, the chaos spells trouble for everything you shop for, from groceries to big-box retail and holiday gift purchases… Pay close attention to the final comments in a video message at the end of this article.” – TraderStef, Aug. 26 (Twitter thread)

Last fall, I had regular maintenance and one major repair on my car without any surprises during its yearly inspection. I was confident there wouldn’t be any big-ticket items required this year at my awesome foreign mechanic shop. I also asked to check one tire that consistently loses about 10lbs of pressure without going flat. That tire is an easy fix every month or so when visiting the local air pump to balance all four. My baby passed inspection with flying colors, but that tire had a dry-rot issue near the rim and needed replacement. I was livid because I purchased that tire in a pair from a major tire outlet just shy of three years ago. Not only do they not make cars like they used to, but rubber manufacturing is not of the quality advertised nowadays. The remaining good pair was purchased two years ago through my current mechanic. For the record, my tires are all-season, high-performance, and don’t come cheaply despite staying away from a luxury brand. I had no choice but to bite the bullet for a new pair and match the remaining two.

The repair shop owner began making phone calls for the price and availability of the tires I needed. That same pair of tires I purchased two years ago is now 40% more expensive and all of the northeast regional warehouses were OUT OF STOCK. The story was the same when checking for any high-performance brand of the same size. We were told it would be at least a few months for delivery with no guarantees. That blip in the matrix resulted in a pretty registration sticker for the next 12 months and a few hundred dollars saved from leaving my pocket, but no tires. I promised not to take any long road trips until we get our hands on some rubber and I have one matching spare!

Cars Get Stuck at U.S. Garages for Weeks in Spare-Parts Shortage… “The challenge of finding spare parts as mundane as oil filters or carpeting has forced repair shops to hoard inventory, find workarounds and plead with customers for patience until a shipment comes in. Typical delays of a day or two have stretched into weeks in some cases, shop owners say.” – BloombergQuint, Oct. 16

My next errand was the grocery store right down the country road. The first oddity to occur was the nearly empty parking lot on a Thursday afternoon. Okay, whatever. So, the store was void of nutty shoppers, roughly 25% of the shelves were bare, and big chunks in the freezer section were empty. The types of missing food are not the same as last year when folks stocked up for winter and another pandemic wave. I improvised yesterday by doubling down on non-perishables that were available and hoarded fresh meats for the deep freeze..

Yes, there is a major problem with supply chains and asymmetric inflation. It’s just beginning, pervasive, and it’s likely you won’t see the same pattern as last year at the local grocery store. Menu prices at a local restaurant I visit monthly with a group of like-minded folks are now 20% more than three months ago. IMHO, get what you need while you can vs. procrastinating about when or what you think you want. You’ve been warned. 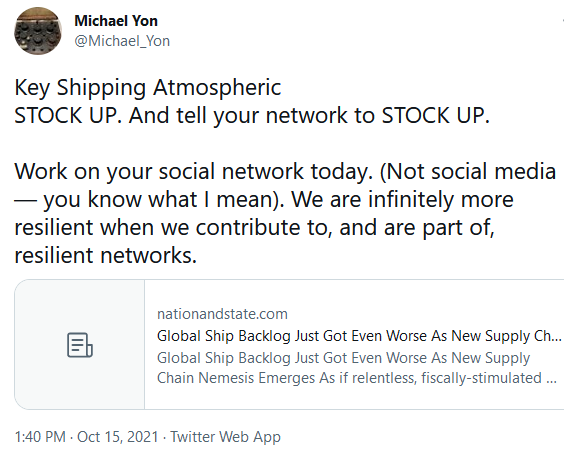 What has the media said since I published part one? Gaps and disruptions continue to grow in the labor force and supply chain logistics. 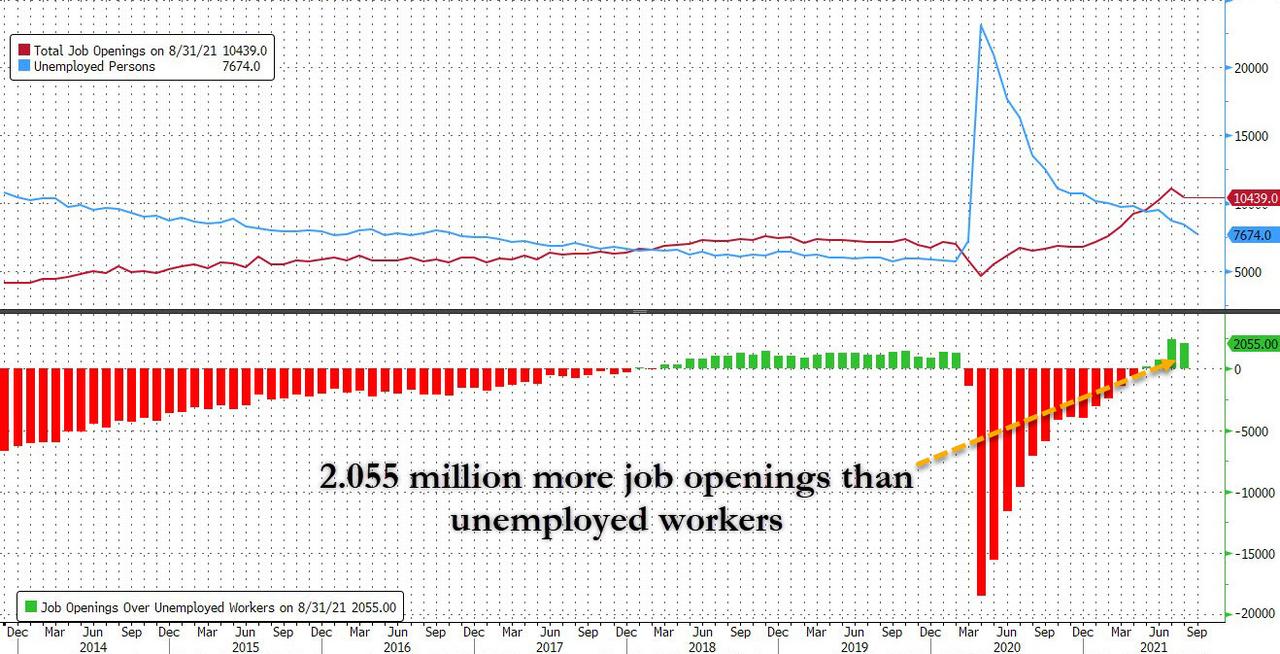 Inside America’s Broken Supply Chain… “Ships wait off the California coast, unable to unload their cargo, truckers are overworked and overwhelmed and often confronting logjams, and rail yards have also been clogged with trains at one point backed up 25 miles outside a key Chicago facility. The commercial pipeline that each year brings $1 trillion worth of toys, clothing, electronics and furniture from Asia to the United States is clogged and no one knows how to unclog it.” – Washington Post, Oct. 2

Nearly half a million shipping containers are stuck off the coast of Southern California… “The port has 19 mega-container ships waiting to dock, the largest of which is carrying 16,022 20-foot shipping containers. ‘Part of the problem is the ships are double or triple the size of the ships we were seeing 10 or 15 years ago,’ Kip Louttit, the executive director of the Marine Exchange of Southern California, told Insider earlier this year. ‘They take longer to unload. You need more trucks, more trains, more warehouses to put the cargo.’” – BusinessInsider, Oct. 6

A record 4.3 million workers quit their jobs in August, led by food and retail industries… “The quits rate rose to 2.9%, an increase of 242,000 from the previous month, which saw a rate of 2.7%, according to the department’s Job Openings and Labor Turnover Survey. The rate, which is measured against total employment, is the highest in a data series that goes back to December 2000.” – CNBC, Oct. 12

#EmptyShelvesJoe trending on Twitter amid Biden’s supply chain crisis… “Social media users employed the tagline to rip President Biden for empty shelves and skyrocketing prices caused by a backlog of shipping containers waiting to dock at California ports. ‘Just went food shopping…again…thanks #EmptyShelvesJoe I really love having to go every day now in order to find what used to take one trip,’ one account wrote, along with a photo of near-empty shelves at a grocery store. ‘I’m pretty sure Biden and the Democrats in DC are eating just fine and are having no issues getting what they need,’ another Twitter user posted. ‘The rest of us lowly Americans who actually go to the grocery stores, not so.’” – NewYorkPost, Oct. 14 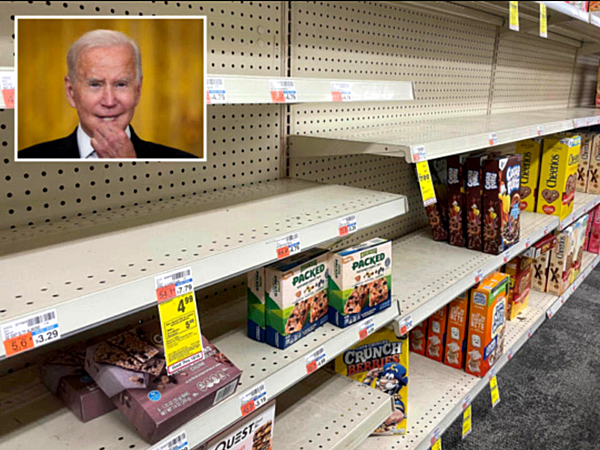 The supply chain shortages hitting the entire country are leaving school cafeterias short of items from utensils to syrup packets… “‘Well, we’re struggling, you know, we can get food, but we’re having a lot of outages and shortages,’ said Stephanie Dillard, child nutrition director at Enterprise City Schools in Alabama… adding another layer of stress on school staff who are coming back from a year of mostly remote learning due to the Covid pandemic. ‘Every week everybody is holding their breath, not knowing whether we’re going to get a truck or not because we don’t know if there’s going to be truck drivers or there’s going to be employees in the distributors’ warehouses.’” – NBC, Oct. 16

Vaccine mandate would deepen supply-chain problems, trucker warns… “A vaccine mandate ‘will be a lot of bureaucracy,’ said J.B. Hunt Chief Operating Officer Nicolas Hobbs. ‘I don’t see it really helping the situation much other than confusion in the supply chain even more’… A mandate would likely result in drivers who are skeptical of the vaccine choosing another line of work or staying home, as has happened in other professions where workers were forced to choose between their health concerns and job. Trucking executives say the industry is grappling with the most severe labor shortage in almost four decades as the industry was facing a 60,000-driver shortfall before the pandemic.” – Fox Business, Oct. 16

I leave you again with a few words of wisdom from Michael Yon (Aug. 24), a seasoned combat journalist. The homicide bombing that killed thirteen U.S. military personnel happened shortly after the following interview. Pay particular attention to his final comments in the last ten seconds.