On September 4, I published “Weaponized Politics Revelation Threatens Financial Market Stability” and dipped my toes into the thorny adventure of politics and intelligence community (IC) antics since the 2016 presidential election. I closed with the following…

“What would the effect on the financial markets be if the RussiaGate game implodes, the POTUS is cleared of all suspicion, and a large number of folks from the previous administration are indicted? The market may experience a knee-jerk rally and remain in the Goldilocks zone with a belief that the economy is booming. On the other hand, the turmoil that would ensue under a constitutional crisis may implode the markets first due to the lack of confidence in the political system, and when the smoke clears and investors feel secure that process is coming to an end in the favor of the current administration, a rally would ensue. Be prepared for either outcome.”

Revolutions do not always begin with tanks and guns in the streets for all to see. Sometimes, they move along imperceptibly until a country transforms into a destabilized, unrecognizable version of its previous state. Great horrors in past revolutions across the globe did not begin with forced famines, killing fields, or gas chambers. They began when a philosophical shift occurred within the nation’s leadership about the value of a human life. The citizenry realizes what has occurred after the fact and are unable to do anything to contain it because their freedoms slowly evaporated. That has taken place over several decades in America. During and after the most recent presidential election, Deep State trolls embedded themselves within the bureaucratic fabric of our government and former officials flagrantly abuse any political capital they might have had while mainstream and social media giants silence differential opinions with 21st-century technology to further a soft coup.

Democratic Socialists of America – “Those of us who declare ourselves socialists must reaffirm our radicalism, envision a truly revolutionary anti-capitalist future, and understand that today, as in Gilded Age America, that our cause is increasingly that of a radical democracy struggling to be born.” – DSA, Sep. 15 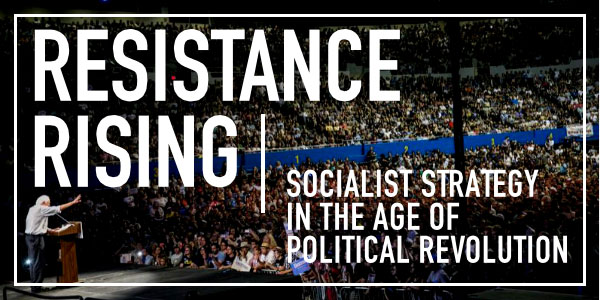 This movement of “fundamentally transforming the nation” is not just an all grown-up ‘60s crowd with deep ideological roots. It is a confluence of elder baby boomers, middle-aged Gen Xers, and indoctrinated young adult Gen Zers and millennial crybabies. Facts about any particular topic or political disposition have become irrelevant. Political correctness, feelings, or intentions matter, not truth and results, and the accused are guilty until proven innocent. Their frustration is understandable on many levels if we examine the record of our government and financial institutions in the execution of financial prudence, forecasting economic conditions, and rampant incompetence and bankruptcy that saturate a multitude of government-run agencies and programs.

I do not see the current wave of discontent having so much to do with the frustrations noted above because they are reversible via the voting booth. The current malaise appears to be more of a dream of complete control over our lives, with no regard to the consequences or constitutional law. It’s a global socialist new world order, where with every move you make and every breath you take, they will be watching you. The current debacle unfolding over Judge Kavanaugh’s SCOTUS confirmation smells of narcissistic liberal totalitarianism because when similar circumstances apply to “them,” the rules or laws do not apply. 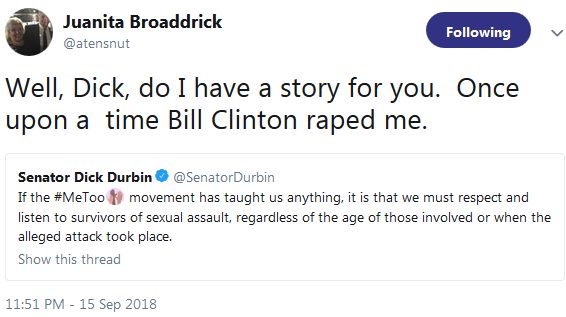 The Drive to Sink Kavanaugh is Liberal Totalitarianism… “I don’t use the ‘T’-word lightly. I’ve spent years pushing back against those who fling it about in free societies like ours. But totalitarianism doesn’t require cartoonish, 1984-style secret police and Big Brother. The classical definition is a society where everything — ethical norms and moral principles and truth itself — is subjugated to political ends. By that measure, the Democratic campaign to block Kavanaugh’s nomination to the Supreme Court, based on a hazy, uncorroborated, decades-old assault allegation, tends toward the totalitarian. Certainly, it has many of the elements of abusive politics that Americans normally associate with foreign lands untouched by the light of liberty and reason” – NYPost, Sep. 19 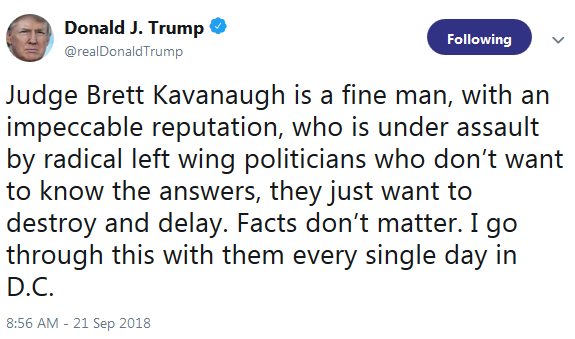 There is talk about an October surprise surrounding the recent news that the POTUS has ordered the immediate declassification and release of several documents related to the 2016 election: the FISA warrant and RussiaGate. Most of the information that Congress has attempted to obtain from the FBI and DOJ has been met with stonewalling (see slow-balling). There are reports that the IC and FBI have already begun the process of going through the documents to ensure sources or methods are not compromised and don’t jeopardize national security. The POTUS ordered their release without redactions, but the IC will definitely thwart the order. The first dump will likely expose Democrat politicians and former Obama IC officials that do not want the voting public to see.  Additional dumps will include the famous text messages that were previously released with heavy redactions. The process will take some time to sort out, and the results may or may not be the bombshell surprise many are expecting. 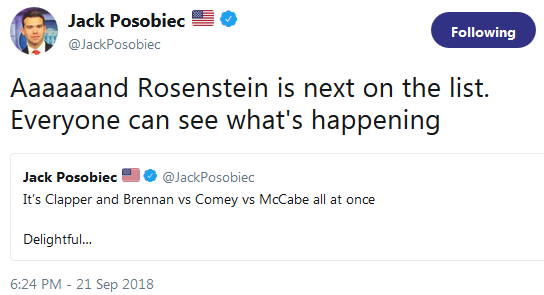 I suspect that what has come to light in recent days with Project Veritas publishing three videos from a year-long undercover investigation showing Democratic Socialists (DSA) and “Deep State” government workers admitting to potential felonies, subversion, or even treason, will be the edge of a cliff for major surprises that may be in store for slackers and deplorables alike. The DOJ has announced that there will be an investigation and the turning over of information to the DOJ’s Inspector General.

With multiple layers of subversive activity exposed, it would be foolish to assume a sanguine outcome across the board as the nation approaches the mid-term ballot box. Are we witnessing the exposure of “useful idiots?” 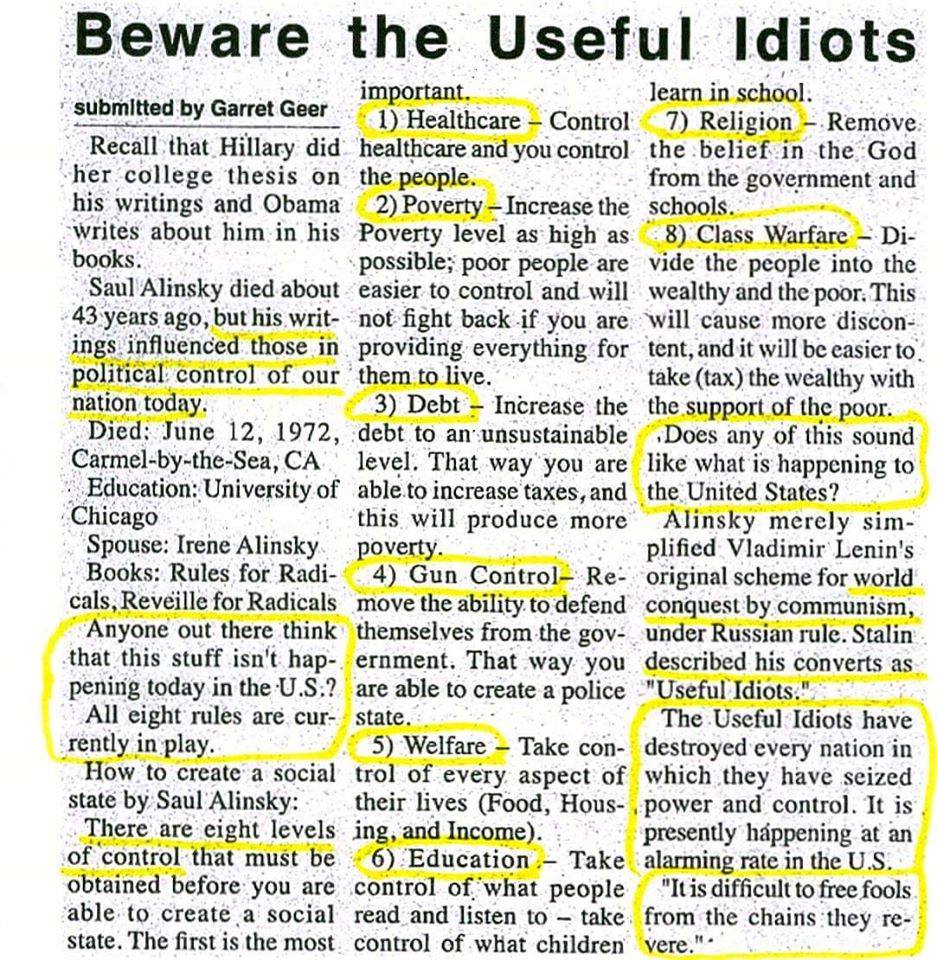 I will add another.

9) Slow-balling – Actively subverting a White House administration’s agenda and policies by “slowing things down” from inside the executive branch and various government agencies, otherwise known as subversion and treason.

Remain vigilant and on your toes with financial investments. This is not a time to be complacent just because Goldilocks is ramming the stock exchanges into record-high territory. 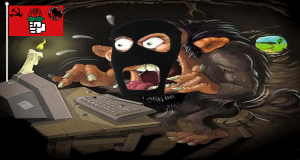