The recession that’s taking hold in the U.S. and Europe is deepening amid a likely escalation of NATO’s proxy war (Twitter thread) with Russia in Ukraine. A sanction-induced energy shortage and subsequent liquidity crisis spawned by a strengthening dollar that the West’s central bank’s hawkish monetary policy and inept political leadership has wrought upon the financial plumbing and economy will manifest a Dark Age with vigor across Europe this winter. Severe inflation and the financial fallout that’s growing will add fuel to the fire of an imminent global recession. A report by FedEx and analyses from the World Bank Group confirmed numerous forecasts since late spring and heightened negative sentiment that’s flourishing across financial markets this month while the U.S. stock market plunged to two-month lows on recession fears.

FedEx CEO says he expects the economy to enter a ‘worldwide recession’… “The CEO’s pessimism came after FedEx missed estimates on revenue and earnings in its first quarter and also withdrew its full year guidance.  He believes a recession is impending for the global economy… ‘I’m very disappointed in the results that we just announced here, and you know, the headline really is the macro situation that we’re facing’… While the company anticipated demand to increase after factories shuttered in China due to Covid opened back up, it actually fell… ‘We’re seeing that volume decline in every segment around the world and  weekly numbers are not looking so good… We are a reflection of everybody else’s business, especially the high-value economy in the world.’” – CNBC, Sep. 16, 2022

Global recession looms amid broadest rate hikes in five decades, World Bank says… “The World Bank study estimates 2023 global gross domestic product growth to slow to 0.5%, and contract 0.4% in per capita terms that would meet the technical definition of a global recession… Policy makers around the world are rolling back monetary and fiscal support at a degree of synchronization not seen in half a century. That sets off larger-than-envisioned impacts in sapping financial conditions and deepening the global growth slowdown… Interest rates could go as high as 6% if central banks look to wrangle inflation within their target bands.” – Indian Express, Sep. 16, 2022 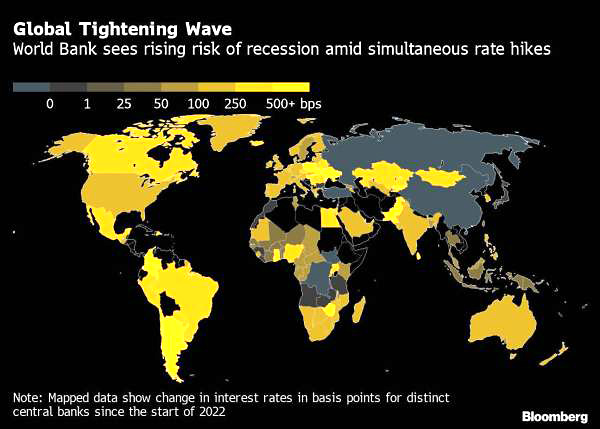 The next financial crisis may already be brewing — but not where investors might expect… “As the Fed prepares to kick its balance-sheet runoff into high gear, some on Wall Street are worried that thinning Treasury-market liquidity could create a perfect storm… Short of an all-out blowup, thinning liquidity comes with a host of other drawbacks for investors, market participants, and the federal government, including higher borrowing costs, increased cross-asset volatility and — in one particularly extreme example — the possibility that the Federal government could default on its debt if auctions of newly issued Treasury bonds cease to function properly.” – MarketWatch, Sep. 17 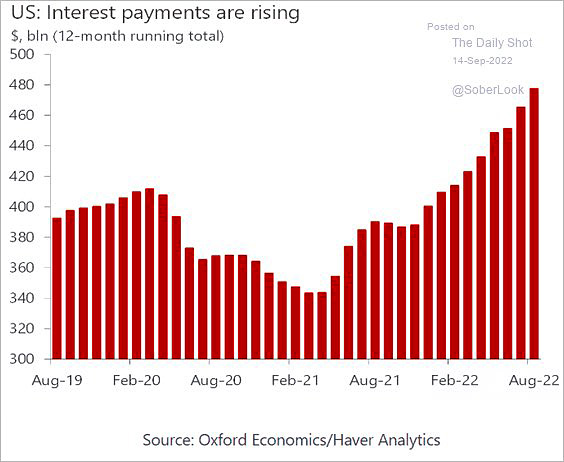 This past Tuesday, Biden’s Inflation Reduction Act party was “hard to be celebratory” as CNN live coverage cut away from his speech when the Dow’s index ticker plunged over 1,200pts. The Whites House’s celebration of the bill took place shortly after the Consumer Price Index report printed 8.3%, which was much higher than anticipated. Here is the Fox News coverage from that moment:

Biden appeared on 60 Minutes yesterday and covered many topics throughout the interview. Here is an excerpt with his opinion on inflation and the economy:

If you’re lost in the camp that believes inflation will melt into a goldilocks economy without volatility in the year ahead, keep in mind that the price of energy underpins the cost of everything. Here is Chevron’s CEO with his take on the year ahead.

“The chairman and CEO of energy company Chevron has warned Americans to brace for price increases in natural gas this winter… ‘Prices already are very high relative to history and relative to the rest of the world. We’re already seeing this in the European economy and I do think it’s likely that Europe goes into a recession,’ Wirth said. Europe has been suffering from an energy squeeze in recent months, driven by its decision to wean itself off fuel from Russia… The outlook for Europe this winter is now looking more strained… ‘A U.S. export ban runs the risk of taking supplies that are needed in other parts of the world and reducing those which can drive world prices up, which then can affect the price of imports into this country.’”

In “Welcome to the Most Anticipated Recession in History” published (Twitter thread) on Jun. 30, my focus was on the birth of a U.S. technical recession based on the negative real GDP data prints in 1Q22 and 2Q22. Here is one reference and excerpt from Part 1

“After penning the ‘Growing Risk of Recession as Bread and Circuses Distract the Plebeians’ Part 1, 2, and 3 (Twitter thread) since the end of March, one data point from the Fed’s officialdom has confirmed that the United States is in a technical recession and heading for a potential hard-landing. Jay Powell’s ‘softish landing’ message is now in the collective rearview mirror as the Federal Reserve Bank of Atlanta published its 2Q22 real GDPNow estimate today of -1% (updated to -2.1% on July 1, 2022), real personal consumption collapsed to +0.8%, real gross private domestic investment plunged to -15.2%, and inflation running hot at +8.6% YoY is the highest since the late 1970s.” – TraderStef

U.S. real GDP for 1Q22 was -1.4%, and 2Q22 was -0.9%. As of Sep. 15, the GDPNow model estimate for 3Q22 growth is 0.5%, down from 1.3% on Sep. 9. The final print is expected to be negative or near zero. The bearish retail sales data for August, hotter-than-expected inflation data, a negative business outlook report in September, and recessionary industrial production numbers are all weighing heavily on estimates going forward. “The U.S. Consumer Is Running on Fumes,” and the next 3Q22 GDP data is due for release on Sep. 20. Here is an excerpt from the Sep. 15 downgrade commentary:

“After this week’s releases from the US Department of the Treasury’s Bureau of the Fiscal Service, the US Bureau of Labor Statistics, the US Census Bureau, and the Federal Reserve Board of Governors, decreases in the nowcasts of 3Q22 real personal consumption expenditures growth and real gross private domestic investment growth from 1.7% and -6.1%, respectively, to 0.4% and -6.4%, respectively, was slightly offset by an increase in the nowcast of real government spending growth from 1.3% to 2.0%.” 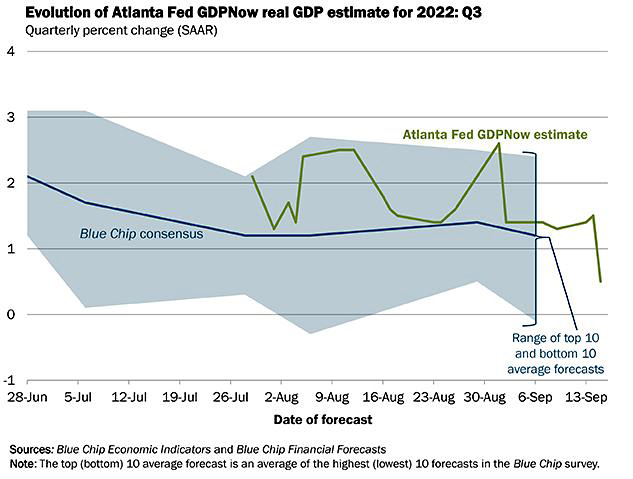 The U.S. consumer is getting clobbered by inflation. Incoming data is a slam dunk for demand destruction that will likely tip the U.S. into a hard-landing recession vs. a soft-landing fantasy. Consumers are so tapped out that “buy now, pay later” plans are growing along with delinquencies. Keep in mind that consumer consumption is responsible for 70% of the U.S. GDP.

Retailers Brace as 70% of US Consumers Skip Retail Purchases to Buy Groceries and Gas … “RH’s Friedman (and Kroger’s CEO Rodney McMullen), bluntly stated that anyone who doesn’t think the U.S. is in a recession is ‘crazy’… Although the cost of gasoline is slowly coming down from record highs in most parts of the country, the cost of feeding families has not — nearly two thirds of consumers say they expect the cost of food to continue to rise into next year. Add to that the increased spending on childcare as more of the workforce returns to an office at least part of the time, and the PYMNTS study reflects a consumer who says they are just about tapped out…. It’s the Recession, Stupid. The consumer’s perspective of a recession is shaped by what’s going on within their own world. Despite attempts by the Fed to put a positive gloss on the state of the U.S. economy.” – PYMNTS, Sep. 12 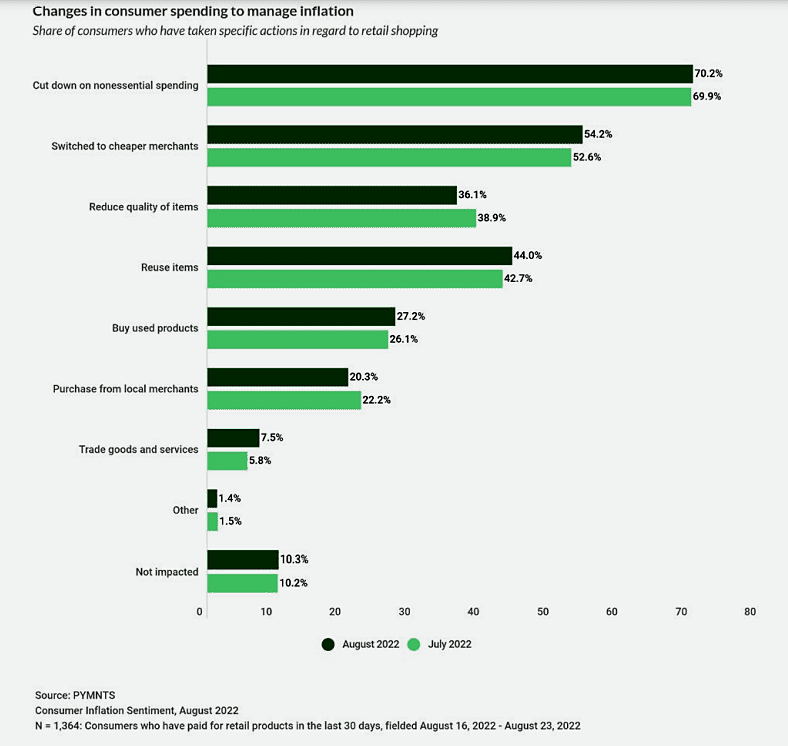 Why Are Walmart And Other Major U.S. Retailers Canceling BILLIONS Of Dollars In Orders As Summer Comes To An End?… “All of a sudden, major retailers are feverishly canceling orders, and this would only make sense if a severe economic downturn was imminent as we approach the upcoming holiday season.” – Michael Snyder, Sep. 18

If you’re under the impression that economic hardship is confined to the U.S. and Europe, consider what’s happening in South America.

Inflation in Argentina hits 79% ahead of likely rate hike… “Inflation marks a new three-decade high, according to government data published Wednesday. Consumer prices rose 7% from a month earlier. Clothing prices rose 109% from a year earlier, while food costs increased by 80%. Worse may be to come, since the government raised regulated utility prices in September, which will have a knock-on effect in several sectors. ‘Monetary tightening won’t suffice to cool price gains in the near term. Energy subsidy cuts and pass-through from faster peso depreciation will push inflation near 90% by year-end,’ said Adriana Dupita, Latin America economist for Bloomberg… Local economists see annual inflation reaching 100% between the end of this year and early 2023.” – Buenos Aires Times, Sep. 15

It’s not just CEOs of major corporations, the World Bank, or a few select pundits that were warning of chaos on our doorsteps since last spring because folks at the International Monetary Fund (IMF) are ominously on the same page.

Social Unrest is Rising, Adding to Risks for Global Economy… “This year, large and long-running anti-government demonstrations have occurred in some advanced economies where unrest is relatively rare, such as Canada and New Zealand. And in several emerging and developing economies, coups and constitutional crises have sparked widespread protests… In coming months, two important factors could lead to an increased risk of future unrest. First, as governments relax COVID restrictions, pandemic-related disincentives for protest might abate. And second, public frustration with rising food and fuel prices may increase. Any rise in social unrest could pose a risk to the global economy.” – IMF Blog, May 2022

Germany’s central bank is now onboard with a European recession that’s rearing its ugly head in its own backyard.

Bundesbank Says There Are Mounting Signs of Recession in Germany… “Central bank sees ‘noticeable’ contraction in winter quarters and inflation rate could enter double digits in coming months. Hints of a recession in Europe’s largest economy are becoming more evident after a significant deterioration in supply conditions, the Bundesbank said. Throttled energy shipments in particular as a direct consequence of Russia’s war in Ukraine are leading to soaring prices and mounting uncertainty in Germany affecting both companies and households.” – Bloomberg, Sep. 19

“The 5 largest economies in the world are experiencing the fastest slowdown in credit creation in over 20 years. History suggests that earnings and economic activity will follow. Soft landing my a**.” – MacroAlf, Sep. 17 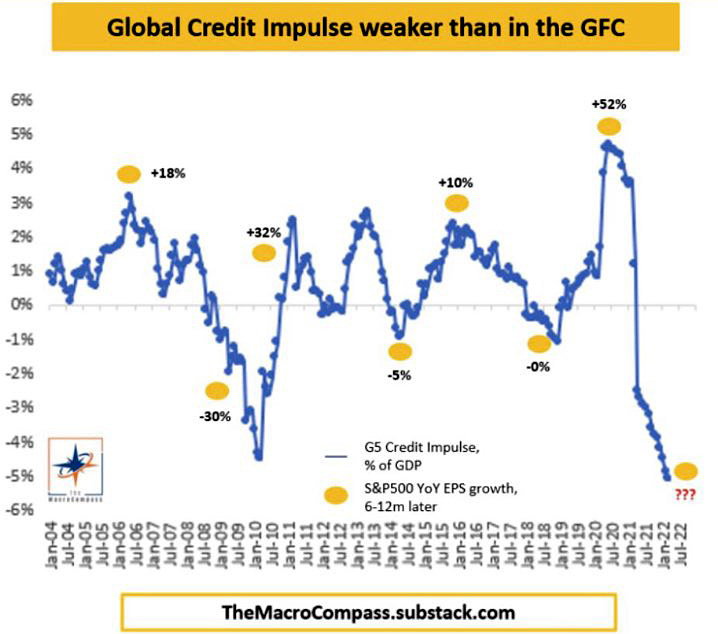 I’ll close up shop tonight with an excerpt from Brandon Smith at his Alt-Market Website and a must-listen-to interview by Steph Pomboy with Jim Rickards. U.S. M2 Velocity of Money and Debt to GDP Ratio chart for reference with the interview.

“At this point, I think if a person can’t see the dangers ahead, they are probably a waste of time and space and are destined to be buried in the ice; there’s nothing that can be done for them. Yes, there are some people out there that don’t get exposed to the information and we have to take them into account, but my priority will be people that are awake and aware and try to give them a sense of what point in the collapse process we find ourselves.”