A negative flow of economic data and liquidity issues are replete with contagion signals and slower growth on a global scale, which are building towards a TPTB acknowledgement that a global recession has arrived. Predicting when the financial lords of officialdom will recognize it and legacy media headlines will report it is a futile exercise among plebes as their home equity, retirement accounts, and savings are steaming away like frogs slowly boiling. The FOMC membership has begun to telegraph that a slower pace in rate hikes is on the table, but what level the Fed Funds Rate (FFR) will reach before the hiking of interest rates comes to an end is a crapshoot. Prior to and after the November FOMC meeting, numerous cracks appeared in Biden’s and Powell’s narrative that the United States economy was on strong footing.

I concur with David Rosenberg’s rebuttal on Powell’s opinion that data lag is not as prevalent as it was in the past. The Fed’s focus on the Consumer Price Index (CPI) data vs. ISM manufacturing producer prices paid that are trending lower and at a quicker pace is one example. 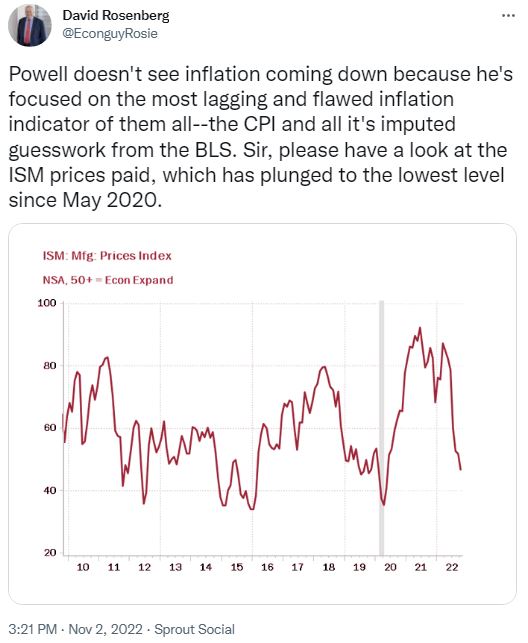 Prior to today, the pundits and market viewpoint were that the Fed is hiking rates into weakening economic conditions. The negative U.S. GDP print in 1Q22 and 2Q22 confirmed the op-eds despite an exports-skewed +2.6% 3Q22 GDP. 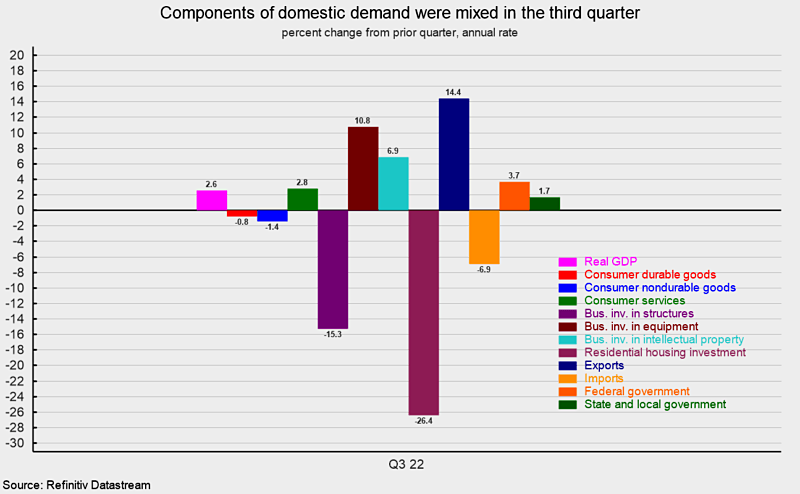 The Fed might be done with 75bp rate hikes as a 50bp hike is expected in December, and then 25bp in February. Meanwhile, billions per month of quantitative tightening (QT) is barely chipping away at the Fed’s $9 trillion balance sheet that’s packed with QE assets from the Great Financial Crisis and pandemic stimulus. Stock market indices have rallied since a worse than expected unemployment report on Nov. 4, followed by the Fed’s Rosengren eluding to recession in 2023 on Nov. 8, a softer than expected CPI report and the Fed’s Harker called for rate hikes to slow on Nov. 10, then the Fed’s Brainard confirmed arrival of a lower and slower pace of rate hikes today. It’s important to note that one month of data points does not make a trend, the loosening of monetary policy too fast will complicate the Fed’s outlook and economic stability going forward, and certain elements of the inflation picture remain a problem.

U.S. job growth strong in October, but cracks emerging… “U.S. job growth increased more than expected in October, but the pace is slowing and the unemployment rate rose to 3.7%, suggesting some loosening in labor market conditions, which would allow the Federal Reserve to shift towards smaller interest rates increases starting in December. The Labor Department’s closely watched unemployment report on Friday also showed annual wages increasing at their slowest pace in just over a year last month. Household employment decreased and the employment-to-population ratio, viewed as a measure of an economy’s ability to create employment, for prime-age workers fell by the most in 2-1/2 years.” – Reuters, Nov. 4 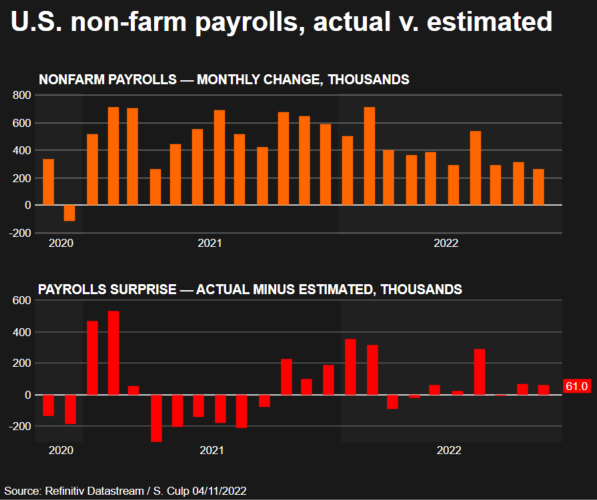 Former Boston Fed President Eric Rosengren: U.S. headed for recession in 2023… “For interest rates to peak at 5.5% next year, Rosenberg said the unemployment rate would likely need to hit 5%-5.5%, up from 3.7% today and above the Fed’s 4.4% forecast… ‘If we go into a recession, it means we’re going to be more reliant on monetary policy easing because…  fiscal policy’s not likely to react to a weakening labor market.’” – CNBC, Nov. 8

Brainard: Fed may slow pace of rate hikes soon… “The Federal Reserve will likely soon slow its interest rates hikes, Fed Vice Chair Lael Brainard signaled on Monday, as the U.S. central bank tries to figure out how high borrowing costs need to go and how long they should stay there to bring down inflation… Fed Chair Jerome Powell has signaled that the central bank’s next move may be smaller to give time to judge how the rapid rate hikes so far this year are affecting the economy.” – Reuters, Nov. 14

The job market is buckling with big-number layoffs across all industries in recent weeks, which include the largest in Amazon’s history and furloughs at FedEx Freight. Additionally, the pandemic induced housing bubble is trending towards a bust faster than anticipated due to the Fed’s massive interest rate hikes since March. A comprehensive list of layoffs is available at Layoffs Tracker.

The U.K. and European Union are not escaping economic trouble as this winter’s Dark Age draws near due to an energy crisis that resulted from the West’s sanctions on Russia over the war in Ukraine, and worldwide shipping is showing signs of a slowdown in global trade.

UK’s Trade-Heavy Economy Heads Toward Recession in Global Slump… “The global economic downturn took its toll on UK trade in September, with exports and imports both falling sharply… The statistics highlighted the impact of the elevated inflation rates gripping major economies, particularly in European Union countries such as Germany… In the UK, weakening consumer spending and business investment saw the economy contract 0.2% in 3Q22, suggesting a long recession is already underway… heating bills are forecast to be painfully high…  and business confidence levels are at their lowest since the pandemic lockdowns.” – Bloomberg, Nov. 14

Ports Clogged With Containers As World Trade Stumbles… “Economic storm clouds are gathering worldwide as some of the largest shipping companies warn about decelerating global trade. US shipper FedEx and Danish shipping giant A.P. Moller-Maersk A/S have been vocal about emerging signs of a global slowdown.” – ZH, Nov. 12

What emerged last week in the crypto world is a potential black swan event where contagion may impact the financial industry and individual investors in unexpected ways that intensify a recessionary spiral that’s already afoot.

Given the extent of bubbles and high debt in the U.S. and global economy, a hard-landing or depression is in the cards with a collapse in stock markets. Get up to speed with the recession series by reading “Welcome to the Most Anticipated Recession in History” Part 1 and 2, the “Growing Risk of Recession as Bread and Circuses Distract the Plebeians” Part 1, 2, and 3, and “A Diesel Fuel Shortage Storm on Top of Record-High Prices” Part 1, 2, and 3.